Published: Sunday, November 28th, 2021 @ 12:02 am
By: Carolina Journal   ( More Entries )
Publisher's Note: This post appears here courtesy of the Carolina Journal. The author of this post is Donna King. 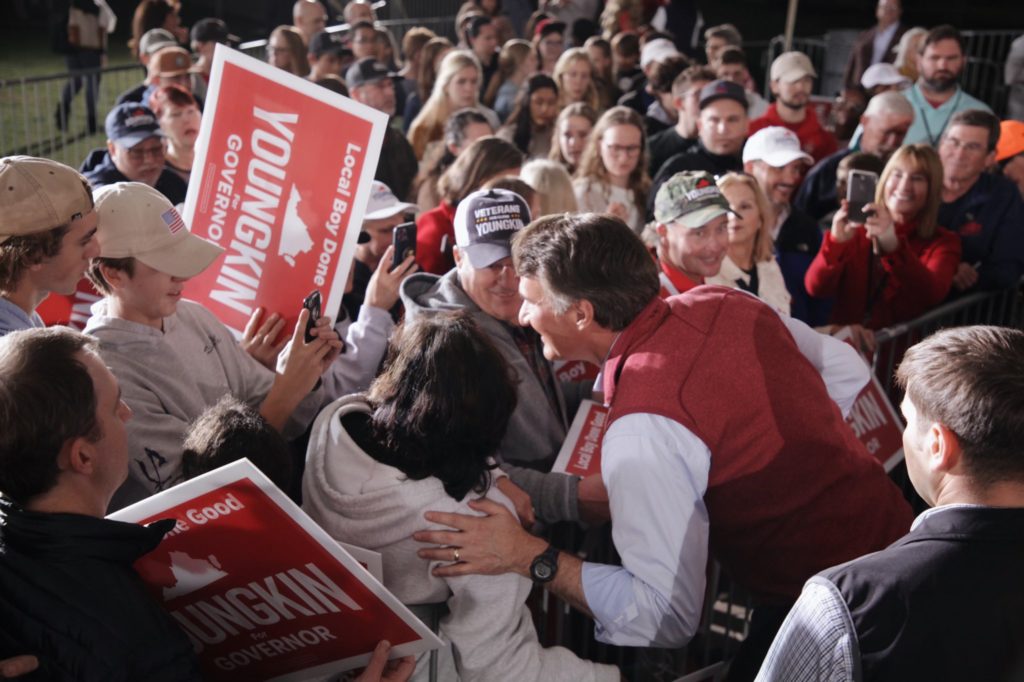 Governor-elect Youngkin won the closely watched Virginia governor's race over McAuliffe, 50.7% to 48.6%. Shockwaves are rippling through the Democratic party Wednesday morning after McAuliffe's loss, combined with Democrat losses in the Virginia legislature, Minneapolis voters rejecting a measure to dismantle the police department, and Democrat Governor Phil Murphy still locked in a dead-even race in New Jersey.

"While last night we came up short, I am proud that we spent this campaign fighting for the values we so deeply believe in," McAuliffe wrote in a statement Wednesday morning.

There was concern in the last days of the campaign that McAuliffe was going to contest the results if he lost. His campaign reportedly hired Marc Elias, the same political operative who launched legal challenges on behalf of other Democrats and was linked to Hillary Clinton's campaign effort to conduct suspicious opposition research on Donald Trump in 2016. Tuesday night, when McAuliffe did not concede with 94% of the vote in, election watchers were wary that lawsuits were coming. However, McAuliffe's concession Wednesday morning ended the contest.

The Virginia governor race had the attention of the nation as the candidates stumped on key issues that are expected to shape the 2022 midterm elections and serve as a barometer for Joe Biden's presidency. It was a disappointing night for Democrats.

"I do think this wave is building," said Republican Florida Gov. Ron DeSantis in an interview Wednesday morning. "I think it was strong last night, but I think it's going to keep building all the way into 2022. And if you go back to the 2010 wave that Republicans had, I think there's more dissatisfaction with what's going on in D.C. today than there was at this time in that election cycle. And that is good news for Republicans, and that is bad news for Joe Biden and his regime."

Youngkin's vote tally pulled ahead early in the night, and by 12:30, media had called the race for Youngkin. At 1:00 am, he was announcing their victory to campaign workers and supporters.

"Together, we will change the trajectory of this commonwealth," Youngkin told supporters.

The trajectory of our nation is what appears to have worried Virginia voters. McAuliffe tested out Democrat talking points like social justice, more regulations on business, and Democrat disdain for former president Donald Trump. In a 15-minute campaign speech on Monday, McAuliffe said the word "Trump" 13 times. His loss indicates that voters aren't impressed with that strategy, and are likely battle-worn by high inflation, supply chain problems, big government spending bills, Biden's chaotic retreat from Afghanistan, and an embarrassing performance at this week's United Nations climate change summit.

Youngkin, a former head of the equity firm The Carlyle Group, spent $20 million of his own money on an upbeat campaign that focused on reducing taxes, adding 400,000 jobs, and opening 20 charter schools, while protecting parental rights in education. Generally, he steered clear of political heavy-hitters from the Republican party, including Trump.

The Youngkin win also raises a red flag for Democrats on the stump power of Biden, Vice President Kamala Harris, and former president Barack Obama. All three campaigned for McAuliffe in the last few days. Just 10 months ago, Biden and Harris won Virginia by ten points in the 2020 elections.

"What happens in Virginia will in large part determine what happens In 2022, 2024, and on," Harris said in a campaign speech for McAuliffe last week.

McAuliffe led in the governor race polls early in this campaign by single digits. However, the groundswell for Youngkin came amid volatile school board meetings in Loudon County, Virginia, where parents expressed frustration over closures, bathroom policies, and curriculum. The public debate led McAuliffe, a former Virginia governor, to say in a debate, "I don't think parents should be telling schools what they should teach."

According to election watchers, this exchange turned the tide against McAuliffe and Virginia's legislature.

The shift is also being watched in the traditionally blue state of New Jersey where Republican Jack Ciattarelli is even, 49% to 49%, with Democratic Gov. Phil Murphy. Twelve percent of the vote is still outstanding. Democrats did claim some victories last night at the local level, with Democrats winning the mayoral races in New York City and Boston, two urban strongholds for the party. In Ohio, Democrat Shontel Brown narrowly won a special election for the 11th District after Rep. Marcia Fudge vacated the seat when she was appointed by the Biden administration to be secretary of Housing and Urban Development. In Ohio's 15th Congressional district Republican Mike Carey, endorsed by Trump, defeated Democratic state Rep. Allison Russo, endorsed by Biden.
Go Back