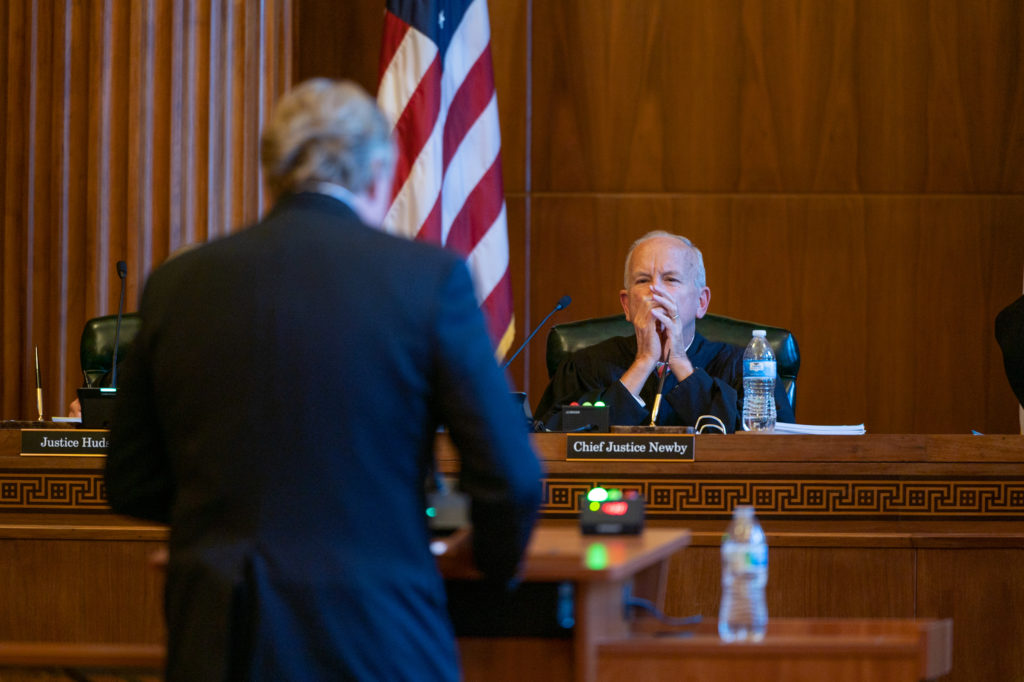 A controversial environmental program controlled by North Carolina's attorney general and funded by hog farm proceeds returned today to the N.C. Supreme Court. The court must decide whether the AG can maintain control of the funding moving forward.

Among the most interesting revelations in oral arguments Tuesday: Plaintiffs' lawyers argue that the attorney general has bypassed normal budget procedures to control the funds over the last two years.

Since 2019, the disputed money has been deposited in the state treasury. "Since we filed our brief, it's now $6 million, but minus $1.2 million that the AG has somehow extracted from the treasury by inexplicable mechanism used through the Office of State Budget and Management," argued attorney Paul "Skip" Stam. Stam is a former N.C. House Republican leader. He's a board member of the John Locke Foundation, which oversees Carolina Journal.

"The attorney general has been taking that money out of the treasury," Stam said. "The last I found out from OSBM, they'd already taken $1.2 million, which explains why in their early brief they said, 'Well, it doesn't matter who wins because we're going to keep doing what we did anyway.'"

"I thought the treasury was like Fort Knox, and you had to have a key to get in, and the key was an appropriation bill," he added. "But, apparently, OSBM and the attorney general have figured out another way in."

Beyond his accusation about the attorney general's recent actions, Stam reminded the Supreme Court of its significant ruling in a case called Cooper v. Berger. Justices said the General Assembly - not an executive branch official like the attorney general - controls decisions about spending state funds.

The plaintiffs argue the money should go toward environmental enhancements for public schools. Plaintiffs hope to see state lawmakers appropriate the disputed money for that purpose.

"Education is far more popular than fixing an abandoned lagoon or protecting wildlife habitat in some remote place in the mountains," Stam said. "If the attorney general wins, then it's only the attorney general's image that is burnished, enhanced by distributing other people's money to favored grantees."

It's the second time in a year-and-a-half that the state's highest court has addressed the case, New Hanover County Board of Education v. Stein. In April 2020, the Supreme Court ruled 6-1 that Attorney General Josh Stein could continue to use the money for his Environmental Enhancements Grant Program.

But six months later, in December, a 2-1 ruling from the N.C. Court of Appeals dictated that the money should flow into the state treasury, rather than into a bank account controlled by Stein.

Since the Supreme Court's original ruling in the case, the lone dissenter - Paul Newby - won election as the court's chief justice. The 2020 election also changed the court's partisan makeup. While Newby had been the only Republican hearing the case the first time around, the current court has three Republicans. (One of those Republicans, Justice Phil Berger Jr., recused himself from hearing the case. He had served on the Appeals Court panel that issued the December 2020 ruling.)

The story starts in July 2000, when then-Attorney General Mike Easley reached an agreement with hog giant Smithfield Foods and its subsidiaries. Among the agreement's details was a commitment to provide up to $2 million a year for 25 years for "environmental enhancement activities."

By January 2003, then-AG Roy Cooper had created the current grant program to disburse the money. Stein assumed control of the grants when he succeeded Cooper in 2017. The program has distributed $24 million to date.

In October 2016, Francis De Luca filed suit challenging the program. De Luca was president of the Civitas Institute, which has since merged with the John Locke Foundation.

De Luca argued that funds flowing from the Smithfield agreement amounted to civil penalties. State law requires that penalties should fund public schools in affected communities. Allowing the attorney general to control the money amounted to giving the AG a "slush fund."

Courts later ruled that De Luca could not proceed as a plaintiff in the case, but the suit moved forward with a different plaintiff: the New Hanover County Board of Education.

When the Supreme Court ruled in Stein's favor in April 2020, justices returned the case to the Appeals Court to address outstanding issues.

Appellate judges responded by applying a 2019 state law to the case. The law requires that any money state government receives as a "cash gift or donation" will flow into the state treasury.

"The statute clearly mandates these are public funds, they belong to the taxpayers of this State, and are required to 'be deposited into the State treasury,'" Judge John Tyson wrote for the appellate panel's majority.

"North Carolina's courts have not permitted members of the executive branch to exercise unbridled appropriation or expenditure of unbudgeted public funds," Tyson added.

"All funds due or held under the Agreement must be paid and deposited into the State treasury, rather than into a private bank account under the exclusive control and discretion of the Attorney General," Tyson wrote.

Dissenting Judge Wanda Bryant argued that the New Hanover school board should not have been able to raise the issue of the 2019 law on appeal.

"The issue raised by the Board ... is novel," Bryant wrote. "It was not addressed by the trial court, nor by our Supreme Court. It is not, therefore, an 'additional proceeding' as contemplated by the Supreme Court's mandate, but an entirely new proceeding which a trial court of competent jurisdiction must rule on before this Court may consider arguments."

Attorney Jim Doggett of the N.C. Department of Justice made a similar argument before the Supreme Court Tuesday. "This is a case that should have ended long ago," Doggett said. "More than a year ago, this court rejected the only claim that up until that time the plaintiff in this case - the school board - had asserted."

New claims linked to the 2019 law should have been made in a new lawsuit, Doggett argued.

Newby raised a similar issue when questioning Stam. "I'm trying to understand why, in the first instance, the Court of Appeals believed that it should address what could arguably be an amendment to the complaint as opposed to allowing that to go back to the trial court."

Justice Sam "Jimmy" Ervin IV, author of the Supreme Court's majority opinion in April 2020, raised a similar question. "Can you point me to any decision that says, in effect, that when something is sent back to the Court of Appeals, that a claim under a new statute - even if there were allusions to the subject matter in the original complaint - was allowed on appeal as compared to in the trial court?"

There's no timeline for a ruling in the case.
Go Back