Governor says he’ll sign $25.9 billion budget, a first for Cooper | Beaufort County Now | Gov. Roy Cooper says he will sign the first budget from the General Assembly since he took office in 2017. The announcement came in a news conference Tuesday, Nov. 16, and before the first vote from the Senate on Tuesday afternoon.

Published: Thursday, November 18th, 2021 @ 8:56 am
By: Carolina Journal   ( More Entries )
Publisher's Note: This post appears here courtesy of the Carolina Journal. The author of this post is Theresa Opeka. 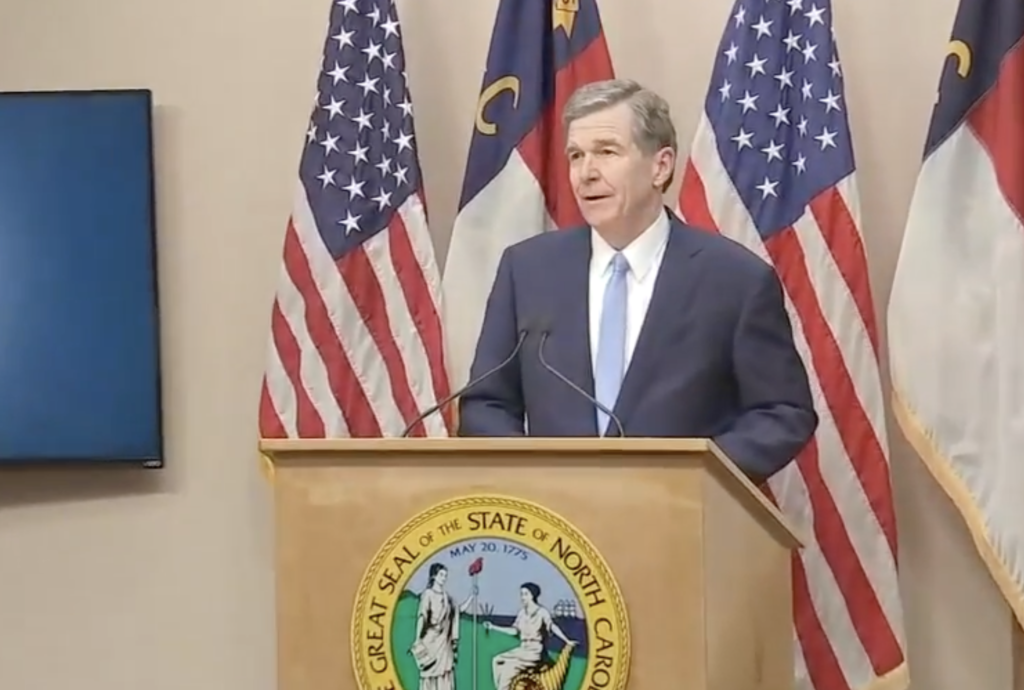 Gov. Roy Cooper announced on Tuesday, November 16, 2021 that he will sign the General Assembly's $25.9 Billion budget: Above. Image from livestream.

Gov. Roy Cooper says he will sign the first budget from the General Assembly since he took office in 2017. The announcement came in a news conference Tuesday, Nov. 16, and before the first vote from the Senate on Tuesday afternoon.

"While I believe it's a budget of some missed opportunities and misguided policy, it's also a budget that we desperately need at this unique time in the history of our state," Cooper said.

Cooper said the budget gets many things right: Expanding high-speed internet across the state so people can access education and conduct telehealth visits with a medical provider. He also mentioned funding for universities, infrastructure, and help for businesses recovering from the pandemic.

Cooper praised many of the things that were also in his own budget proposal. But the legislature's conference budget didn't escape his criticism, particularly his years-long demand to expand the Medicaid entitlement program, a reason he gave for vetoing every budget since taking office.

"This budget fails to extend health care to the hundreds of thousands of people by expanding Medicare. The legislature directs future tax cuts to corporations rather than the middle class and lower-income."

The bill also contains policy limiting a governor's emergency authority, a move that would become effective after Jan. 1, 2023. This action would not affect Cooper directly, as he can't run for another term as governor. The revisions were part of the original Senate budget bill this past spring and a direct response to Cooper's emergency declarations over the past 20 months due to the pandemic. Those orders included restricting people's movements, limiting gatherings, shutting down businesses and schools, and setting curfews. The revision would require such orders to get approval from a majority of the Council of State after a set period. The council is a group of 10 statewide elected officers, including the lieutenant governor.

The budget plan includes language to ban collusive settlements, effective immediately. Cooper vetoed a bill in September designed to block the state attorney general from entering collusive lawsuit settlements and stems from a controversial 2020 lawsuit settlement involving state elections. Cooper indicated that these elements may be challenged in court.

"This budget also makes unnecessary politically motivated missteps that will be overturned in courts," he said. "By signing this budget, I want to make it clear that I didn't consent to the constitutionality of these provisions."

Cooper also made clear his opposition to cutting taxes on businesses.

"I do not support tax cuts for corporations. They don't need it," he said in response to a reporter's question. "I do not support tax cuts for the wealthiest individuals in North Carolina. There are many years to fight for a fairer tax system in our state. It gives the tax cuts to lower-income and middle-income families instead of those who need it least. I think it is wrong, that particular part of the budget, but I will continue to fight for fairer taxes moving forward."

If he vetoes the budget, Cooper said, many critical funding opportunities would evaporate at a time that they are so desperately needed. But he praised his veto power, supported by Democrats, saying it was an important and successful tool in making North Carolina a better place for people to live and work.

"I will continue to use it when I believe a bill causes more harm than good. I will also continue to reach across the aisle and work with this legislature in a bipartisan way whenever I believe the people will benefit from it," he said. "... However imperfect this budget is, our schools, communities, small businesses, our families, need help right now, especially as we recover from this pandemic. I will sign this budget because of its critical and necessary investments, and I will fight to fix its mistakes."

House Speaker Tim Moore, R-Cleveland, immediately released a statement on Cooper's plan to sign the budget. "This budget represents months of hard work and good-faith negotiations between Republicans and Democrats, House and Senate, and our governor. The result is a spending plan for the state that addresses the most critical needs of North Carolinians."

Moore continued, "North Carolina has not had a budget since 2018, and I am encouraged that Governor Cooper has promised to sign this budget and we can finally give our state a budget they can truly be proud of and one that meets the most critical needs of North Carolinians."

Senate Leader Phil Berger (R-Rockingham) added, "This budget continues the Republican-led legislature's decade-long commitment to low taxes and responsible spending. The multibillion dollar surpluses these policies helped create are evidence that they're working, and it means we can cut taxes even more."
Go Back