(Raleigh, N.C.)     The town of East Laurinburg will cease to exist as an incorporated municipality after June 30, 2022. The Local Government Commission (LGC) voted unanimously Tuesday, Dec. 7, to dissolve the beleaguered Scotland County town, exercising for the first time new statutory power to revoke charters of local governments that are in fiscal distress and unable to sustain operations.

The LGC, chaired by State Treasurer Dale R. Folwell, CPA, and staffed by the Department of State Treasurer (DST), unanimously passed a resolution to revoke the town's charter. Under the law, the General Assembly could veto the action, but there has been no indication that will happen.

The resolution stated, in part, the LGC "determined ... that the city's financial affairs are not sufficiently stable to continue operations" and that "it is in the best interest of the city and state to transfer the assets, liabilities and other obligations of the town to local government partner(s) and hereby dissolves the Town of East Laurinburg" pursuant to Senate Bill 314. That legislation was signed into law by the governor on Aug. 30 and expanded the LGC's power to repeal local government charters.

"It is with deep regret that we must take this action, which we tried to avoid for many years by offering every assistance possible to East Laurinburg to correct numerous financial, budgetary and operational deficiencies," Treasurer Folwell said. "In the end, they did not fully avail themselves of our staff's expertise or demonstrate the resolve to make the tough choices that were necessary to be a viable municipal government."

The treasurer said maintaining taxpayers' confidence that their elected leaders are serving as good stewards of their money is of paramount importance. That public trust has been tarnished by ineffective governance, lack of transparency and little accountability.

"I've been a motorcycle mechanic figuring out repair solutions for most of my life," Treasurer Folwell said. "But I have no tools in my tool kit to fix the problems in East Laurinburg."

East Laurinburg failed for years to file required annual audits or to establish and maintain a proper accounting system needed to track finances and operate under a balanced budget ordinance. A state audit found apparent embezzlement by a former town finance officer whose mother, a Town Council member, co-signed illicit checks. In the recent election the mayor and all three Town Council members were write-in candidates. Only one candidate had filed to run for office.

The LGC voted in November to impound the town's books and assume full control of its finances due to major bookkeeping, banking and auditing deficiencies.

Although East Laurinburg provides no essential services to its citizens, it does operate streetlights and administers a contract for trash pickup. The LGC is in discussions with Scotland County officials to assume control of these services.

The town was first incorporated in 1903 as Scotland Village after timber cottages sprang up in the area. It was renamed East Laurinburg and its charter was amended in 1909. It was once a thriving textile town.

"East Laurinburg will retain its character, charm, sense of history and community pride whether it is incorporated or not," Treasurer Folwell said. "Many such vibrant, unincorporated communities exist throughout the state."

In other matters, Tuesday's agenda included three requests from the city of Winston-Salem. LGC members approved a request to issue $70.5 million in revenue bonds to improve water metering and billing procedures, sewer infrastructure operation and regulatory compliance. The city received the green light to obtain $60 million in limited obligation bonds. That will be used to refinance previous debt at a savings of nearly $2 million, and to make improvements to Bowman-Gray Stadium, Long Creek Park and Liberty Plaza, construct the Belview Recreation Center and acquire the former U.S. Bankruptcy Court building and surrounding land. A $20 million increase on a state revolving loan for water plant expansion also was approved.

Dare County, and the towns of Duck, Kill Devil Hills, Kitty Hawk and Southern Shores received approval to finance more than $30 million in beach restoration projects. Dare County will use nearly $9.2 million in limited obligation bonds as a contribution to beach renourishment in those four municipalities, and for improvements to the county Justice Center. The towns were cleared to seek special obligation bonds for beach renourishment and dredging: Duck, $2.4 million and $2.5 million; Kill Devil Hills, $610,000 and $3.6 million; Kitty Hawk, $5.1 million; and Southern Shores, $5.7 million.

The LGC approved a request from the Harnett County Board of Education for a $14.6 million installment purchase on what is billed as a guaranteed energy savings contract employing a variety of energy conservation measures.


Other financing items on the agenda include: 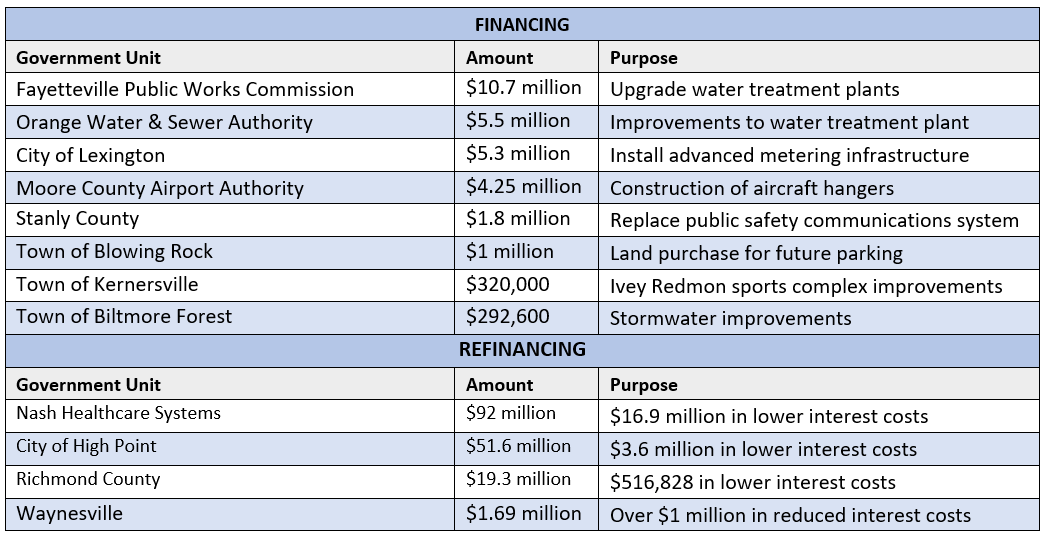