Charter schools are tuition-free public schools that have more freedom than district-run public schools, but are required to meet certain state regulations, such as participation in the accountability program, the ABCs of Public Education. In 1996, the N.C. General Assembly passed charter school legislation. Sixteen years later, charter schools are among the most popular and successful schools in the state.

•    Charter school enrollment has grown to about 45,000 students, an increase of 45 percent over the last five years. Still, charter school students represent only 3 percent of the total public school population in North Carolina.

•    In 2011, the N.C. General Assembly eliminated restrictions on growth from the 1996 charter law. Lawmakers removed the 100-school cap and authorized charter school enrollment to grow by up to 20 percent a year, up from the previous cap of 10 percent, which had led to long wait lists and few open seats.

•    The 2011 charter school legislation created a new oversight group, the N.C. Public Charter School Advisory Council. The purpose of the council is to review and recommend charter applications to the N.C. State Board of Education. The council also will assist the Office of Charter Schools in ensuring that charters maintain high academic and operational standards.

•    Since the authorization of charter schools in the state, 33 have closed for various reasons, but the State Board of Education has not revoked a charter since 2010.

•    According to 2010-11 test results, 24 percent of charter schools received the state's top classification -- Honor School of Excellence. Only 8 percent of district schools earned that honor.

•    In 2010-11, charter schools had a four-year graduation rate of 81.1 percent. That is comparable to the statewide rate for district schools of 81.4 percent.

•    The average 2010-2011 per-pupil expenditure among the state's charter schools was $8,732. The per-pupil district average was $9,251. This reflects the fact that charter schools do not receive capital funding.

1.    Legislators should eliminate regulations that require charter schools to employ a minimum percentage of certified teachers. Charter schools should have the freedom to hire the most qualified applicants, not just those with state-approved credentials.
2.    The State Board of Education should repeal any policy or regulation that sets student performance standards for charter, but not district, schools.
3.    The N.C. General Assembly should discard any regulation or statute that requires charter schools to reflect the racial/ethnic balance of the school system in which they reside. It is impossible for charter schools to use random (lottery) and non-random (affirmative action) student selection mechanisms simultaneously.
4.    The state should permit successful charter schools to replicate themselves through a special review and approval process developed and conducted by the NC Charter School Advisory Council. 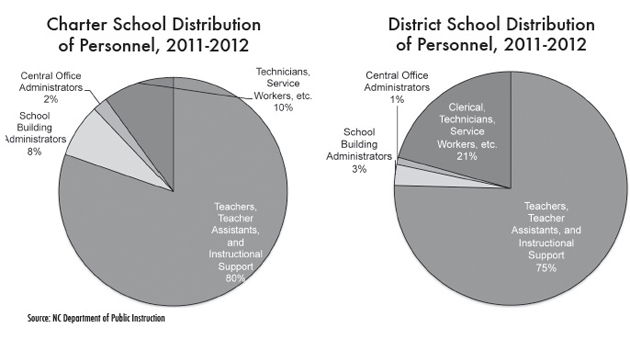