Our woke military goes to extremes | Beaufort County Now | The Biden administration is hell-bent on ferreting out those pesky white supremacists.

Our woke military goes to extremes 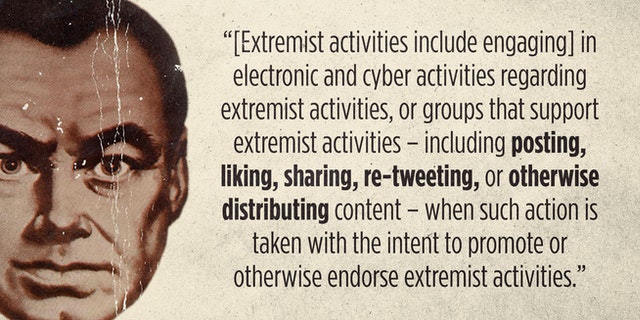 Our Woke Military Goes to Extremes

The Biden administration is hell-bent on ferreting out those pesky white supremacists.

“Like” the wrong thing on social media, and you’re likely in big trouble, Soldier. You, too, Sailor. Airman. Devil Dog.

That’s the message from Defense Secretary Lloyd Austin, who this week issued a memorandum and a report on Countering Extremist Activity Within the Department of Defense. Austin’s memo begins:

The overwhelming majority of the men and women of the Department of Defense serve this country with honor and integrity. They respect the oath they took to support and defend the Constitution of the United States. We are grateful for that dedication.

We believe only a very few violate this oath by participating in extremist activities, but even the actions of a few can have an outsized impact on unit cohesion, morale and readiness — and the physical harm some of these activities can engender can undermine the safety of our people. We owe the men and women of the Department of Defense an environment free of extremist activities, and we owe our country a military that reflects the founding values of our democracy.

Austin’s directive then introduces the U.S. military’s new anti-extremism policy and is thus the latest salvo in the Biden administration’s efforts to root out and punish anyone in the military who might take issue with, say, the teaching of racist, cohesion-killing Marxist doctrine such as Critical Race Theory, or the taxpayer funding of gender “reassignment” surgery for active-duty “transgender” warriors, or the naming of a Navy ship after a sailor whose acclaimed biography indicates that he had sex with underage boys and received an “Other than Honorable” discharge from the service. Things like that.

Apparently, Joe Biden’s Department of Defense has the warfighting stuff all figured out. No need to study what went wrong in Afghanistan. No need to worry about why China is so far ahead of us in hypersonic missile technology.

As the Military Times reports, the notion of defining what constitutes extremism is still an inexact science for the Pentagon — like “‘threading a very fine needle, when we’re engaging in prohibiting conduct that may be protected by the First Amendment,’ a defense official told reporters Monday.”

As the Times also noted, “Recruits won’t be subject to any sort of social media screening before signing a contract, a defense official said, but recruiters will ask some questions about their activities or affiliations.”

Here’s an idea: How about asking each recruit if he’s willing to support and defend the Constitution of the United States?

As the report also states, “Military personnel are responsible for the content they publish on all personal and public Internet domains, including social media sites, blogs, websites, and applications.”

It all seems like much ado over not very much. As Pentagon spokesman John Kirby said, “We believe that less than 100, or about 100, active duty or reserve component members of the military participated in prohibited extremist activities.”

Let’s see: That’s somewhere around 100 potential “extremists” in a U.S. military of more than 1.4 million? While we certainly remember the murderous rampage of a lone extremist, Nidal Hasan, at Fort Hood on November 5, 2009, we can’t recall Joe Biden, Secretary Austin, or Joint Chiefs Chairman Mark Milley ever having mentioned Islamic extremism in this context — only white supremacy. Clearly, then, the Biden administration and the woke Left have their priorities all screwed up. And our enemies are likely looking on in bemusement.

Hat tip to George Schryer for sending us this link.