N.C. ABC creates board to help address problems, but will it only add to an already bloated bureaucracy? | Beaufort County Now | The N.C. Alcoholic Beverage Control system has a new commissioner. It gets continued reassurance from its boards and warehouse operator that they’ll get it right and, to that end, newly created groups meant to help them do so.

N.C. ABC creates board to help address problems, but will it only add to an already bloated bureaucracy?

Published: Sunday, January 2nd, 2022 @ 8:36 am
By: Carolina Journal   ( More Entries )
Publisher's Note: This post appears here courtesy of the Carolina Journal. The author of this post is John Trump. 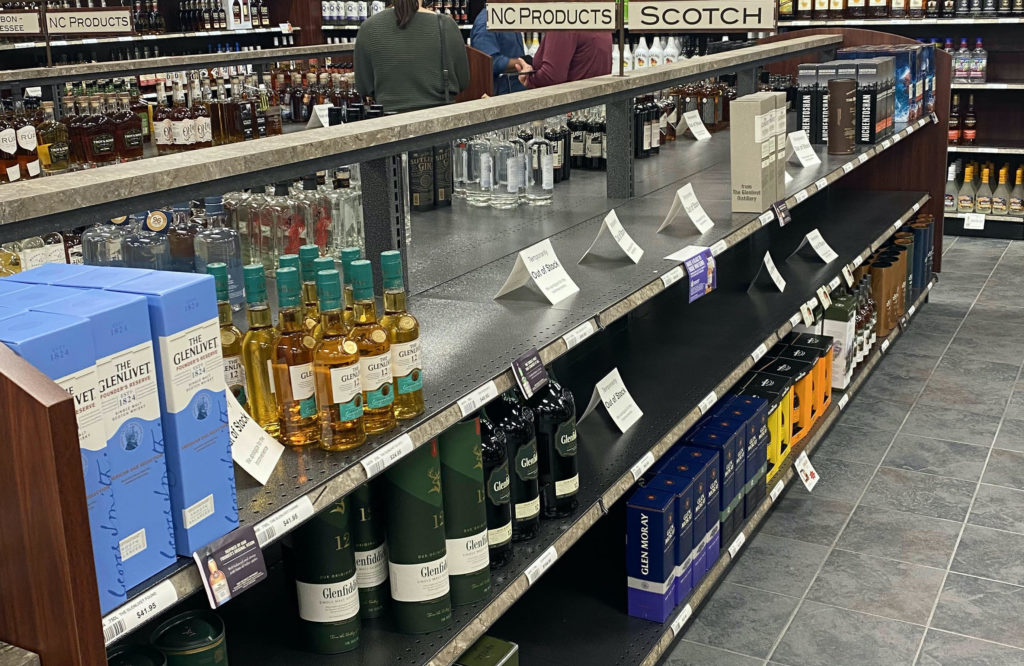 A Scotch aisle during a recent visit to the N.C. ABC store on S.W. Cary Parkway in Cary. (CJ photo by John Trump)


The N.C. Alcoholic Beverage Control system has a new commissioner. It gets continued reassurance from its boards and warehouse operator that they'll get it right and, to that end, newly created groups meant to help them do so.

Yet, in myriad ways, it's mostly still the old N.C. ABC system. Liquor held by local boards - the source from merchants and consumers alike - remains in short supply, a problem more pronounced in the larger counties, such as Forsyth and Wake, and boards are still struggling to learn a new ordering system implemented this summer.

Lawmakers have taken steps toward modernizing a system now pushing 90 years old, but issues inherent with a state-controlled monopoly and store managers indifferent to customers' wants and needs persist.

Further, more efficient systems in Virginia - also state-controlled - and South Carolina - which is private - push N.C. residents across the border for rare products and even easily found products such as Jack Daniel's and Jameson.

"It comes down to the county manager doing his or her job," says Jason Ruth, vice president of N.C. Bar Owners Association.

In New Hanover County, he says, board managers have worked to get direct shipments from distillers, "and that's what saved us."

Some customers aren't so fortunate

"It's hit or miss across the state," says Ruth, who owns a couple of successful neighborhood bars around Wilmington.

In the ABC store on S.W. Cary Parkway, smack-dab in one of the more affluent areas in the state, shelves are bereft of most Scotch brands and any bourbon beyond that not highly marketed and recognizable

No other state, even most of the 16 others under state control, Ruth says, is having a similar experience. "I can drive across the border in South Carolina and find anything I need."

N.C. ABC says it's committed to fixing ongoing problems with supply and the state's warehouses, operated by LB&B Associates. In March 2021, the ABC Commission voted unanimously to recommend the state award a new 10-year contract for warehouse services to LB&B, the target of an audit in 2018 that has, over previous years, cost the state about $13.5 million. The ABC concurred with the audit and promised to fix the myriad issues, including a focus on accountability and efficient delivery.

The agreement, the ABC says, includes a requirement of nearly error-free and on-time deliveries as well as increased delivery frequency to the state's 171 local ABC boards. LB&B has operated the state warehouse system since 2003. A new software system was implemented in early July and, LB&B attorney Ben Thompson told lawmakers this fall, customers are still learning to use it. Some local ABC boards are reluctant to use the new system at all, continuing to use the older system, which connects suppliers and customers with the warehouse.

In March, Gov. Roy Cooper appointed Hank Bauer chairman of the N.C. ABC Commission. Bauer replaced A.D. Zander Guy Jr., who abruptly resigned in September. Bauer, a news release says, is former general manager at Empire Distributors, where he also served as the director of sales and on-premise director. He takes over during a turbulent time for the ABC, as the state warehouse struggles to get liquor into state-run stores, now highlighted by empty shelves and out-of-stock signs.

The ABC says it's addressing the problems, in myriad ways.

The ABC Board Advisory Committee, made of ABC board members from around the state, plans to meet quarterly to provide recommendations to the commission related to allocated products and other distribution-related issues.

A separate entity, the Spirituous Liquor Advisory Council, was created by House Bill 890. The goal of the group, a news release says, is growing the spirituous liquor industry in the state, improving the state's rank as a spiritous-liquor producing state, raising awareness of the industry and the quality of the products, developing a plan that identifies problems and constraints of the industry, and offering advice and recommendations to the Commissioner of Agriculture.

That board includes nine members, but, outside the distillers, it's short on people who actually buy spirituous liquor to sell to the public. The board's members, a news release says, are:


Ruth called the idea of creating a board without a plethora of permit holders "absurd."

"You can't have a successful situation without having a permit holder on there," says Ruth, who intimated the board itself will contribute to an already bloated bureaucracy.

Spokesman Jeff Strickland told Carolina Journal the ABC Commission asked that the local ABC boards form the advisory committee - composed of board members - to enhance and streamline feedback the commission gets from local ABC boards. The ABC doesn't want to tell the boards how to run the committee.

"It is the commission's goal for this committee to be independently organized by the ABC boards, with a focus on providing reports and recommendations to the commission about how to improve distribution or other board-related topics," Strickland said.

"The initial advisory committee members were selected by their fellow ABC board representatives who were in attendance. To ensure statewide representation, the general managers split into four groups along geographic lines and selected representatives for those regions. It will be up to these individuals to coordinate the next meeting, determine the plan for filling out the committee membership structure, and make sure all 171 ABC boards have input and are part of the process."
Go Back