Only American Citizens Should Be Allowed to Vote in North Carolina Elections | Beaufort County Now | There is a growing movement in the United States to allow noncitizens to vote. Most recently, New York City passed an ordinance that would allow up to 800,000 noncitizen legal residents to vote in city elections.


There is a growing movement in the United States to allow noncitizens to vote. Most recently, New York City passed an ordinance that would allow up to 800,000 noncitizen legal residents to vote in city elections. They have been allowed to vote in school board races there since the 1980s.

New York is hardly alone in allowing noncitizens to vote. As part of a currently small but growing movement, the Vermont legislature overrode Gov. Phil Scott's veto to permit noncitizen voting in local elections last year. Noncitizens are also allowed to vote in some elections in Maryland and California.

Momentum is gaining for a broader push to allow noncitizens to vote. Democratic attorney Marc Elias' Democracy Docket webpage wrote positively about the New York ordinance for noncitizen voting, calling it a move to "expand voting rights and include more people in the political process." Their embrace of noncitizen suffrage suggests it could be something Elias and his allies will eventually push nationwide. CNN, the New York Times, and the Boston Globe have all recently argued for granting noncitizens the right to vote.

The fight over noncitizen voting will eventually come to North Carolina one way or another. But there is some good news. While some states and localities are moving towards allowing noncitizens to vote, others are explicitly banning it.

North Carolina should join them. A citizen-only voting amendment here would also patch a hole in the North Carolina State Constitution: not only does it currently allow noncitizens to vote, but it also excludes some U.S. citizens from being able to vote. 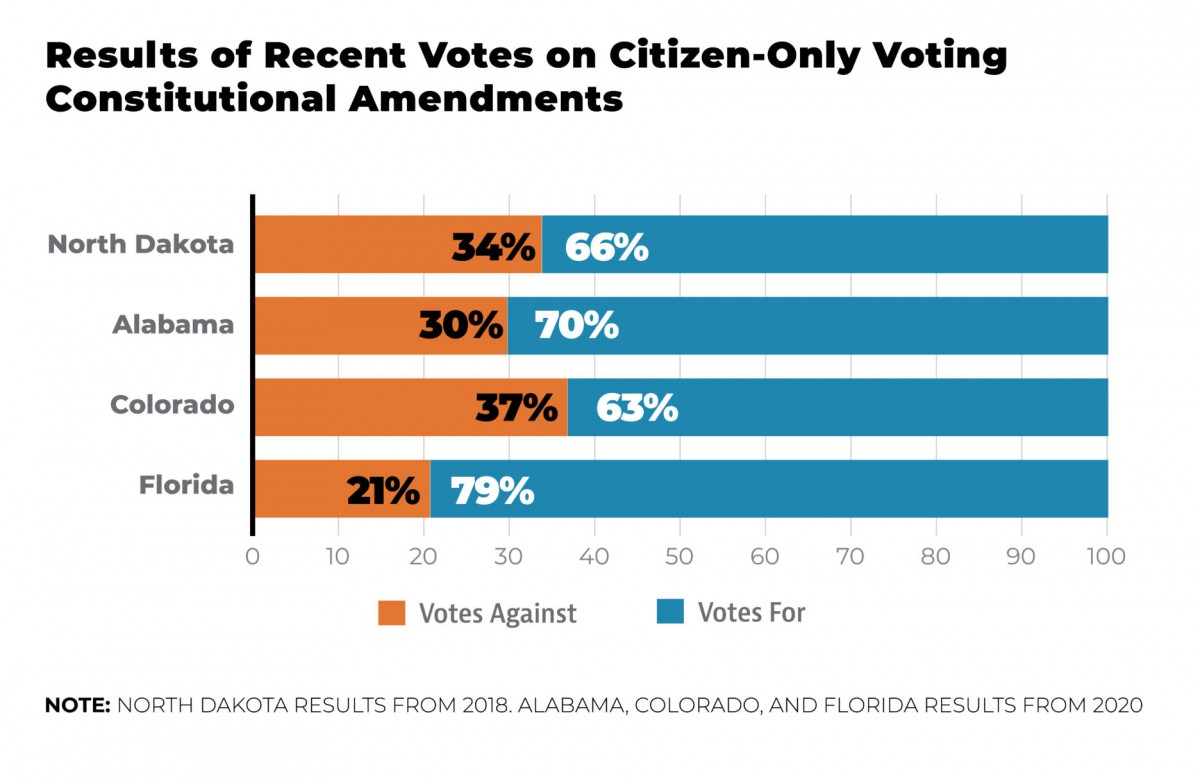 What Would a Citizen-Only Voting Amendment Change?

Article VI, Section 1 of the North Carolina constitution states: "Every person born in the United States and every person who has been naturalized, 18 years of age, and possessing the qualifications set out in this Article, shall be entitled to vote at any election by the people of the State, except as herein otherwise provided."

The current language says that citizens cannot be denied the right to vote, except as provided elsewhere in that part of the constitution. Still, it does not specify that only citizens may vote in North Carolina. The amendment would correct that. As explained below, this change would also include a group of citizens who are excluded in the current constitutional language: natural-born citizens who were born overseas.

Why Is This Change Necessary?

First, whether noncitizens can vote in our elections is fundamental to how our republic works. Its importance rises to the point where it should be a part of our state government's foundational document.

Citizenship is not just a piece of paper. It binds us together as national and state communities that collectively rule our republics. As Alabama Secretary of State John Merrill noted, the proper route for immigrants to gain voting rights is through naturalization:

Nationalized citizens must take an oath to the U.S. Constitution, and they have shown they are dedicated to learning about our institutions, laws, and political culture. The naturalization process serves as an essential, shared experience for millions of past and present immigrants to the U.S. In comparison, non-citizens do not have this same shared experience nor have they shown the same verifiable degree of dedication to understanding and joining our national community.

Second, statutory limits are subject to change by temporary majorities in the legislature, whereas constitutional limits are more permanent. Like those in New York City, future politicians in North Carolina could see granting noncitizens the right to vote as a means to "reshape local politics forever," either by allowing noncitizens to vote statewide or permitting municipalities or counties to allow noncitizens to vote in local elections.

A citizen-only voting amendment would amount to a technical correction to North Carolina's constitution. It would clarify that only United States citizens may vote in our elections and include natural-born citizens who were born overseas.

North Carolina should join the growing number of states that are passing citizen-only voting amendments to their constitutions.
Go Back