In North Carolina, cities are experiencing tremendous growth, driving up the demand for housing units. Yet new home growth is stagnant or below its potential in many areas due to a handful of factors discussed in Part 1. Harmful restrictions from local leaders prevent the addition of more affordable housing options.

North Carolina has an opportunity to tackle this issue.

Thankfully, state legislators recently took steps to clarify and modernize the statutes for planning and zoning regulations for cities and counties. Legislators simplified Chapter 160D of the North Carolina General Statutes, the law for zoning-related powers, by consolidating city and county laws. Additionally, legislators prohibited third-party downzonings without the consent of property owners. Downzoning could involve deciding to disallow ADUs or moving from allowing duplexes to allowing only single-family homes.

Legislators allowed "conditional approvals" to enable flexible zoning approvals for a specific project. They also prohibited city and county zoning ordinances from including a minimum square footage requirement for small dwellings, a nod to the rising popularity of tiny homes.

Last year, the North Carolina General Assembly filed the "Act to Increase Housing Opportunities" in both houses, "the most ambitious state zoning reform yet." Though the bill did not become law, it revealed the desire for positive momentum in housing.

The bill would have preempted local restrictions that allow only single-family homes and legalized duplexes, triplexes, etc. It would have permitted homeowners to rent out part of their home as an ADU and removed related parking restrictions that make such living situations more difficult. The bill would not have allowed downzoning unless the local government could prove a substantial change in public health, safety, or welfare. It also would not have allowed a local government to "adopt or enforce an ordinance that establishes a ban on a use of land ... that does not otherwise pose a serious threat to the public health, safety, or welfare."

Adopting such a measure would make significant strides against restrictive zoning laws that artificially limit the stock of available affordable housing options.

According to the Census Bureau, North Carolina has just over 4 million occupied housing units. The vast majority of these are traditional, detached homes. 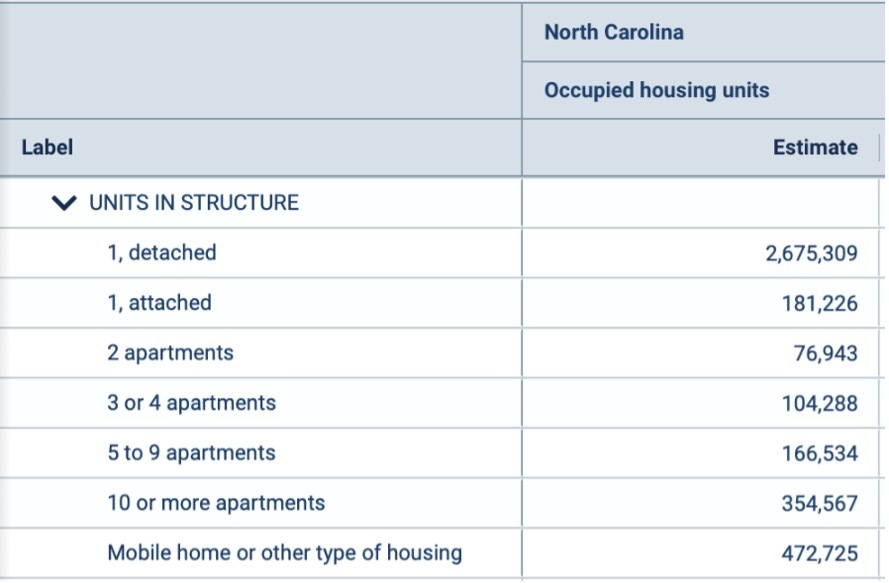 Most North Carolinians live in one- or two-person households.

There is undoubtedly an opportunity to allow creative, market-driven solutions like ADUs to provide a greater range of housing options to North Carolinians, especially marginal renters in metro areas. Local leaders in North Carolina should remove barriers to housing that drive up prices and restore property owners' rights to earn from their investments. North Carolina can be an example of expanding opportunity for all.
Go Back