What Does Intensive Community Policing Entail? | Beaufort County Now | As explained in the previous installment in this series, the evidence clearly shows that police presence deters crime.

What Does Intensive Community Policing Entail?


As explained in the previous installment in this series, the evidence clearly shows that police presence deters crime. That being the case, the solution to the current spike in homicides may appear obvious: simply hire more police officers and deploy them in a way that ensures they are a highly visible presence in high-crime, high-disorder neighborhoods. In fact, however, keeping the peace in such neighborhoods presents many challenges, and successfully responding to those challenges will require, not just more police officers, but officers who are well-trained, well-managed, and committed to high professional standards.

Almost 40 years ago, in the seminal article that introduced the idea of community policing, George L. Kelling and James Q. Wilson noted that, "The essence of the police role in maintaining order is to reinforce the informal control mechanisms of the community itself." Clearly, it is impossible to understand and reinforce a community's informal control mechanism without the support and approval of the law-abiding members of that community. However, winning and maintaining such support and approval has always been a challenge, and the wave of anti-police hysteria that was triggered by the death of George Floyd makes it particularly challenging right now.

One longstanding reason why relations between Blacks and the police have been strained arose as a natural consequence of the fact that the late 20th century crime wave hit Black communities particularly hard. Because crime rates were so high in those communities, even the residents who had not committed crimes were likely to have family members and friends who had. When forced to choose between the police on the one hand and friends and family on the other, many naturally sided with the latter.

Divided loyalties are not the only source of friction, however. As noted in a previous installment in this series, the punitive approach to crime control adopted in response to the late 20th century crime wave imposed hugely disproportionate social costs on Blacks. It was natural for them to resent having to bear that burden, and it was natural for them to resent other changes in the criminal justice system as well.

Among the most consequential of those other changes was the ramping up of the so-called "war on drugs." Because it required secrecy and involved large sums of cash, the drug war tended to corrupt the officers involved, and because it necessitated the extensive use of surveillance and informers and of practices like entrapment and no-knock raids, the drug war tended to alienate the police from the communities in which they worked. Other changes that took place around the same time - including the proliferation of newly created and poorly defined crimes, the revival of civil asset forfeiture, and the use of fines and fees as a source of revenue - had similar effects.

All of these factors will make it hard to persuade Blacks to support an expanded police presence in their communities, but that is not the only challenge intensive community policing will have to overcome. Other challenges include: reconciling the efficacy of swift and certain punishment with the requirements of due process; dealing effectively but humanely with those who suffer from untreated or unsuccessfully treated mental illness and addiction; and responding appropriately to the fact that racial disparities are likely to persist, and may even worsen, as crime rates go down.

For all these reasons, intensive community policing inevitably entails more than simply deploying large numbers of police officers in high-crime, high-disorder neighborhoods. A successful program will have to employ officers who are willing and able to adhere to high standards of professionalism, and it will have to provide them with state-of-the-art training, direction, and support. All of those things are possible, but accomplishing them will be expensive.

To begin with, because it has driven a significant number of officers out of the profession and discouraged many potential recruits from applying, the anti-police hysteria that gripped the country after the death of Floyd has probably made it impossible to maintain current police levels without significant pay increases. Expanding the number of police officers will likely require raising pay scales even more. Attracting recruits who can succeed in the daunting task of maintaining public order in communities in which anti-police sentiments continue to run higher than usual will likely require raising pay scales further still. And providing them with the training and support they will need will also add to the cost.

If the more cops/less crime thesis is correct, much of the added cost will eventually be offset by savings in other areas, including the costs of arrests, prosecutions, and incarceration, and they will be more than offset by the psychological and social benefits to those who would otherwise have been crime victims and to those who will enjoy more and better economic opportunities. In "When Brute Force Fails: Strategic Thinking for Crime Control," Mark A.R. Kleiman calculated that a $5 billion investment in additional police officers would generate about $25 billion in benefits. 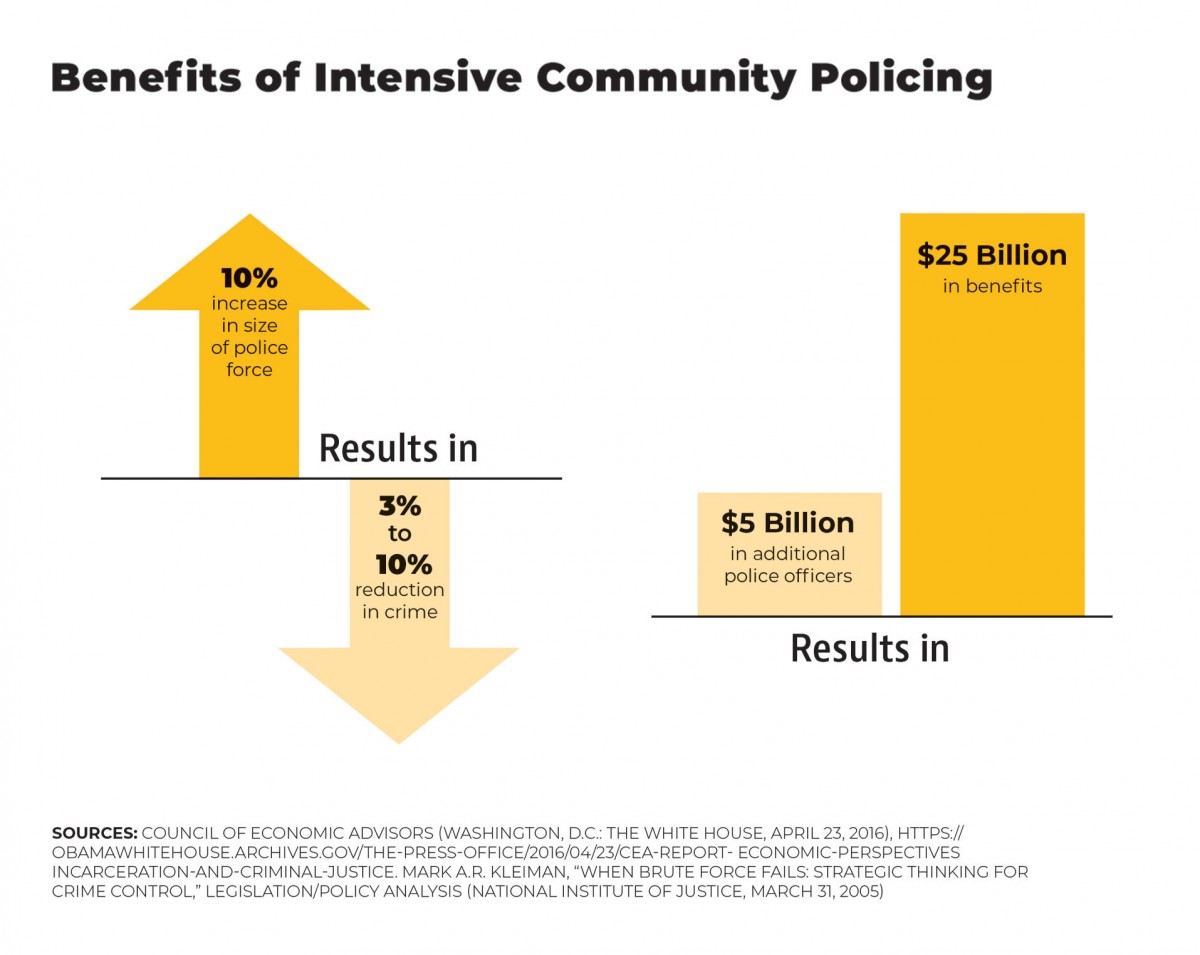 Notwithstanding those long-term savings and benefits, however, the initial costs will be significant. At a time when anti-police hysteria remains high and "defund the police" continues to be a popular slogan in some quarters, persuading policymakers and the public that those costs are worth paying could be difficult. Nevertheless, there are reasons to believe it can be done. Those reasons for optimism will be the topic of the next installment in this series.
Go Back