Theft in San Francisco Triggers Debate on Crime and Capitalism | Beaufort County Now | A tweet went viral this week of a San Fransisco Walgreens store that appears to have nearly everything under lock-and-key.

Theft in San Francisco Triggers Debate on Crime and Capitalism

A tweet went viral this week of a San Fransisco Walgreens store that appears to have nearly everything under lock-and-key.

Every item in this SF Walgreens is under lock and key.There's practically nothing you can buy without having to call an associate to unlock something.I've never been in a country that lives this way. pic.twitter.com/omFdoqH2CL

There were seemingly two reactions to this tweet. One common reaction was blaming leftist policies - something along the lines of, "Progressives don't take property crimes seriously enough, which leads to increases in the kinds of crime that would cause a store to install such a theft-protection measure."

The second was blaming capitalism (and the conservatives that promote it). The thought process is something along the lines of, "Capitalism does not do enough to support the poor, so they result to stealing. People wouldn't need to steal if we just gave them more financial support." One popular comment on the picture read "if only people could have their basics needs met maybe they wouldn't take to stealing as a mode of survival."

Of course, I am rephrasing these responses in a slightly more professional way. This is Twitter, after all. Rarely does anyone say anything kindly. But let's analyze the merit of these two general responses.

Anyone familiar with California property crimes would remember Proposition 47, a law passed in 2014 that lowered criminal penalties for theft under $950. Prior to the passing of this law, thefts above $400 could be prosecuted as felonies-now they are classified as misdemeanors. Misdemeanors carry lower sentences and penalties than felonies, so the theoretical deterrent effect of the law would have been lowered for thefts between $400 and $950. The question is: does the theory that Prop 47 contributed to an increase in property theft hold any water?

There is evidence that Prop 47 contributed to an increase in property crimes in California. The Public Policy Institute of California (a nonpartisan, but generally considered liberal-leaning think tank) states in their report of Prop 47's effects on crime:

"Statewide, property crime increased after 2014. While the reform had no apparent impact on burglaries or auto thefts, it may have contributed to a rise in larceny thefts, which increased by roughly 9 percent (about 135 more thefts per 100,000 residents) compared to other states."

Some people seemingly believe that Prop 47 legalized thefts under $950, which is not true. But there are legitimate concerns that lowering the categorization of offenses to misdemeanors has made perpetrators more likely to "get away with it." There are both quantitative data suggesting misdemeanor crimes are not being prosecuted at the same rate they used to be and qualitative testimony from San Fran police that support this theory. Data provided to the San Fransisco Examiner by the District Attorney's Office in the first half of 2021 show criminal charges were filed in only 52% of shoplifting cases in 2021, and just 43% in 2020 (compared to 70% in 2019 and 67% in 2018).

On the prosecution side, much of this drop-off has been attributed to DA Chesa Boudin, and the Examiner quotes Boudin on his change in approach to nonviolent crimes as stating, "We made an intentional decision to prioritize crimes involving violence, injury to human beings and use of weapons." On the law enforcement side, there is disincentive as well when tackling misdemeanor crimes. In an article for NBC, San Francisco Police Chief William Scott stated, "If it's a felony, our officers can take action... But if it's a misdemeanor, that arrest has to be a private person's arrest. And that makes a difference because they have to be willing to do that." 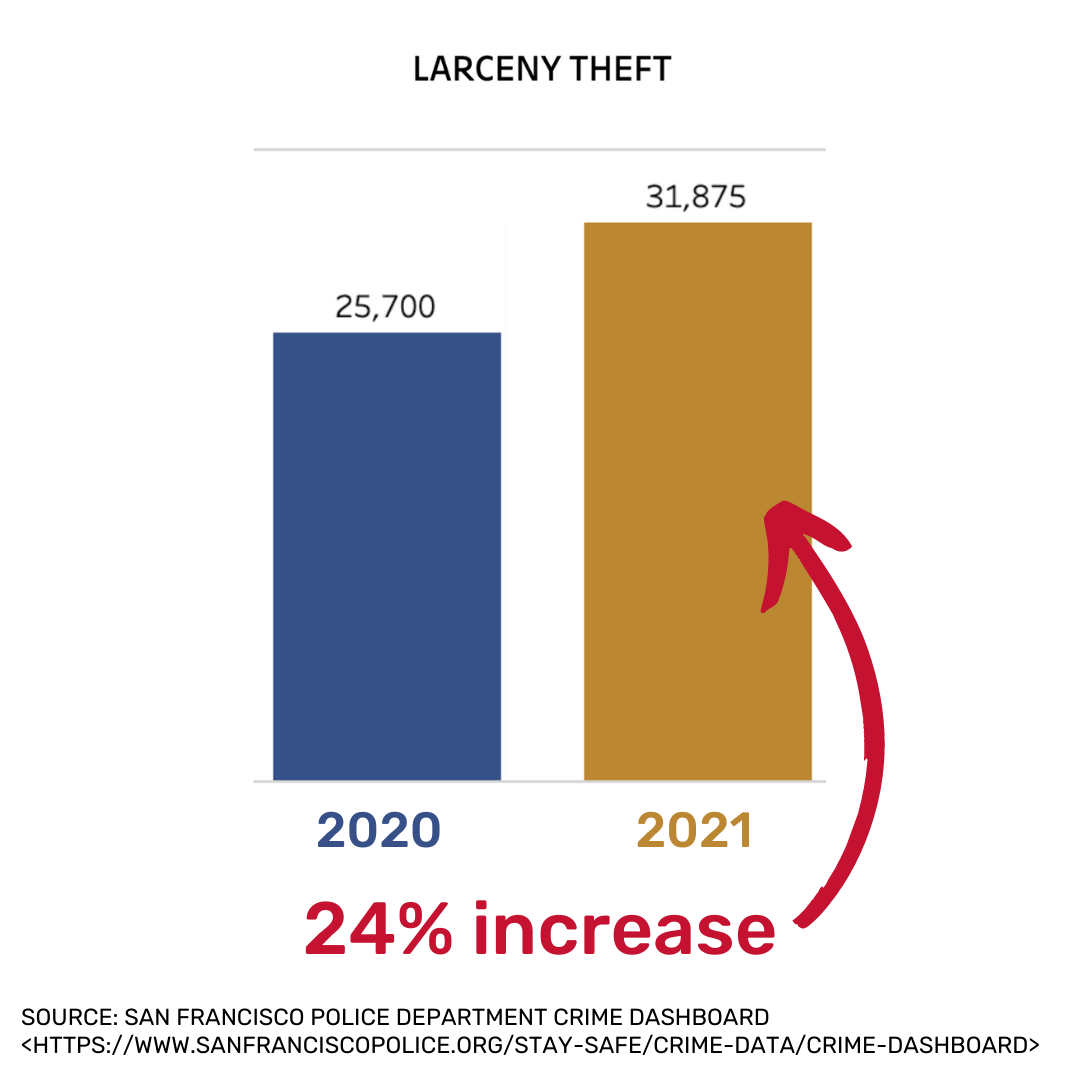 What is more, if we look at the image presented, you'll notice many of the items locked up are cosmetic items - not necessities. Stealing makeup is not "a mode of survival" or a crime of necessity as suggested by the commenter, but a petty crime for a want, not a need. As a woman, I understand the benefits makeup can afford a person and the desire many have to use makeup, but I can promise you it is not a necessity. In fact, the only thing I could truly consider a necessity in the picture is the only thing not locked up: sunscreen-a literal anti-cancer drug-most of which have a nourishing enough base to replace the lotion someone would've purchased (or stole) next to it.

As an aside, I would just like to take a moment to remind folks to wear sunscreen - it could very literally save your life. And the myth that people with darker skin don't need sunscreen is patently false.

There are also options for those who may not have the resources to purchase goods like makeup and toiletries to get them in San Fransisco thanks to the generous donations of people and businesses to nonprofits like Project Glimmer and Simply the Basics. Despite what anti-capitalist commenters on the internet may think, society does work to provide for people in need, and voluntary contributions help to provide things to people who need (or want) them without government coercion. Government programs are not the only way to give to folks who are struggling.

Based on the facts in front of us, Walgreen's choice to lock up its products is likely a result of lawlessness, not a failure of capitalism/society. Walgreens had to close many stores in San Francisco expressly due to theft. Vacant storefronts and the exodus of businesses like Walgreens aren't helping San Franciscans, and the decision to make thefts more difficult for law enforcement to tackle and the choice to not prosecute many of these cases is only further harming people and businesses.

Suggestions for reducing crime and best serving the communities affected by high crime can be found in our report, "Keeping the Peace Through Intensive Community Policing," available here.
Go Back