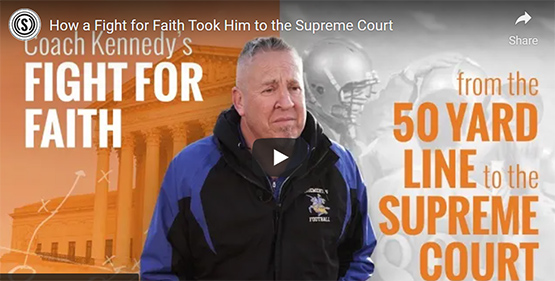 The First Amendment:  Congress shall make no law respecting an establishment of religion, or prohibiting the free exercise thereof…

Most likely you don’t know who Joe Kennedy is, but soon you will.

Joe Kennedy was, in his own words, “a pretty bad kid.” So, when he was given the opportunity to coach football at the high school where he graduated, it felt like an opportunity for “penance … to pay back all the debt,” Kennedy says.

He hoped to help prevent his players from falling into “the same traps that I did,” the coach adds.

But when Kennedy, 53, was forced to choose between his coaching position and his faith, the former Marine says that “was a no-brainer, and I stood up and fought.”

Kennedy’s fight for faith began in 2015, after he had been an assistant coach at Bremerton High School, a public school about 30 miles west of Seattle, for seven years.

From the time he began coaching in 2008, Kennedy recalls, he made a covenant with God that he would take a knee in prayer and thanksgiving at the end of every game.

“I don’t remember anything about the first time I took a knee, because it was not a big deal,” Kennedy told The Daily Signal in an interview for a documentary on his case. “It was just me going out there and taking a knee by myself, and giving thanks for what the players just did, and … being part of it.”

It did not take long before the football coach’s players wanted to know what he was doing at the 50-yard line at the end of each game.

Players asked Kennedy whether they could join him, and soon the post-game prayer became a new tradition for the team. During those moments, Kennedy also would deliver a brief motivational speech to his players.

No parent or student filed a complaint about the post-game prayers.

But in 2015, the Bremerton School District learned about the prayers and told Kennedy he no longer could pray with students.

“It was really simple for me to agree with them and say, ‘That’s not a problem.’ I never prayed with the kids ever again,” Kennedy recalls.

Kennedy continued to pray by himself after games, he says, but soon “school lawyers got involved, and they kind of kept moving the goal post.”

Supervisors told Kennedy that he could “no longer pray even by myself if people could see me,” he says. “And that’s where I just had to draw a line.”

The school district placed Kennedy on administrative leave because he refused to stop taking a knee in prayer after football games. When it came time for his contract to be renewed, he says, his year-end evaluation read “in great, big, bold letters … , ‘Do not rehire.’”

“Coach Kennedy was fired because he wanted to take a knee in private prayer by himself at the 50-yard line in view of  students,” said Jeremy Dys, an attorney with First Liberty Institute, a nationwide legal organization protecting religious liberty that represents Kennedy.

The coach says he decided to file a lawsuit against the Bremerton School District when he “realized that I was not going to be able to win this by myself.”

“There was no way I could talk to the school district anymore” Kennedy recalls. “Their lawyers said I was not to be in any contact with the school or anyone at the school, unless it was through the lawyers.”

After the 9th Circuit Court of Appeals ruled in favor of the Bremerton School District, Kennedy and his attorneys with First Liberty appealed to the Supreme Court.

Government employees “still have a right to live their life,” Kelly Shackelford, chief counsel, president, and CEO of First Liberty, told The Daily Signal outside the Supreme Court Building following the arguments. “They can go to church, they can speak, they can pray, and we should never allow the government to punish them for doing that.”

Richard Katskee, an attorney who is vice president and legal director of Americans United for the Separation of Church and State, represented Bremerton School District before the high court. Katskee told The Daily Signal that the public school district “did what schools everywhere should do: It respected the rights and religious freedom of all its students.”

The questions facing the justices are these: When a public school employee says a brief, quiet prayer by himself while at school and visible to students, is he engaged in government speech that lacks any First Amendment protection? And if not, assuming that kind of religious expression is private and protected by the First Amendment, does the Constitution’s establishment clause require the public school to prohibit it anyway?

The Supreme Court is expected to answer those questions in a ruling anticipated sometime in June.

All he wants from the Supreme Court is a ruling that allows him “to be a coach,” Kennedy says, “and … thank God afterwards.”