Working and earning a living is a right, not a privilege. Why, then, is North Carolina among the few states that still levies a "privilege" license tax?

As I wrote last month, a privilege license tax is essentially a tax imposed for the so-called privilege of conducting business in the state.

Now, with an appetite for more reform in the General Assembly, there is an opportunity to remove what remains of this perplexing and unwanted tax. The unfairness of imposing a tax on citizens' right to earn a living is grounds enough to eliminate it. But if that isn't reason enough, below are three key reasons to scrap the privilege tax.

First, the revenue brought in from the privilege license tax is low: less than one-quarter of one percent of the total state tax revenue, $41.2 million in Fiscal Year (FY) 2021.

Moreover, the majority of that revenue comes from installment paper dealer fees. Installment paper dealers must pay 0.277% of the total face value of the obligations "dealt in, bought, or discounted in the business of handling installment papers, notes, bonds, contracts, or evidences of debt" - a small amount relative to the money being handled, but a significant amount when looking at the composition of the privilege license tax revenue.

Without the installment paper fees, penalties, and interest, annual privilege license fees for FY 2021 were a much smaller $6.6 million.

The state budget would not be starved from losing the $6.6 million from privilege tax licenses. Countless pork projects in the last budget greatly exceeded this number.

The privilege license tax is levied on a random patchwork of occupations and persons. Even among those occupations, the rates are not neutral. Most pay $50 each year, but pawnbrokers and loan agencies must pay $250 each year. Accounting professionals must pay a $12.50 license tax for certain employees on top of the $50 annual tax.

However, among those required to pay the tax, the real estate sector pays the largest share: 39% of the $6.6 million total for FY 2021. The North Carolina Department of Revenue (DOR) processed more than 53,000 licensees or renewals for real estate agents in North Carolina in FY 2021. Physicians were the second largest group, with more than 16,000 licenses.

The pie chart below illustrates the 29 groups that pay the privilege license tax and how much they pay as a percentage. To simplify, I removed the percentage indicator on the chart for the 16 groups that made up less than 2% of the total ($6.6 million).

Why is the state government interested in making podiatrists, dentists, embalmers, and landscape architects pay this annual fee? The compliance cost is a heavy lift for businesses, while the revenue is insignificant for state government. 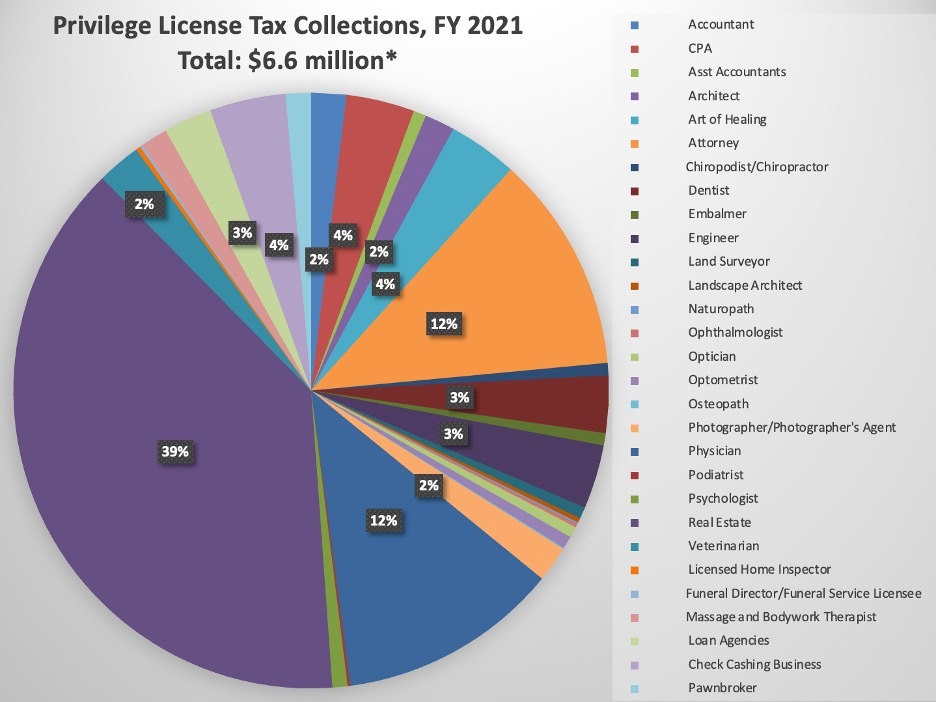 Source: Collections information for privilege licenses processed during 2020-21 received in email correspondence with the North Carolina Department of Revenue

If the above pie chart does not cause you to question the existence of this tax, learning about the compliance process surely will.

Individuals or businesses must pay these annual fees through "snail mail." An online process does not exist. According to DOR's web site, the tax "cannot be paid online or over the phone."

Moreover, the privilege license tax is not a one-time fee. The compliant business or individual must perform the entire renewal process each year by July 1 through a mailed form.

Should your business relocate, you must notify DOR via snail mail, but you must use a separate form from the annual fee form.

North Carolina is a model for tax reform. Over the past decade the General Assembly has consistently advanced pro-growth tax policies, letting hard-working North Carolinians keep more of their earnings. Removing what remains of the privilege license tax would be a natural next step for growth-minded leaders to ensure North Carolinians forgo the headache of a "privilege" fee to earn a living here.
Go Back