Published: Thursday, September 8th, 2022 @ 11:59 pm
By: Daily Wire   ( More Entries )
Publisher's Note: This post appears here courtesy of the The Daily Wire. The author of this post is Dillon Burroughs. 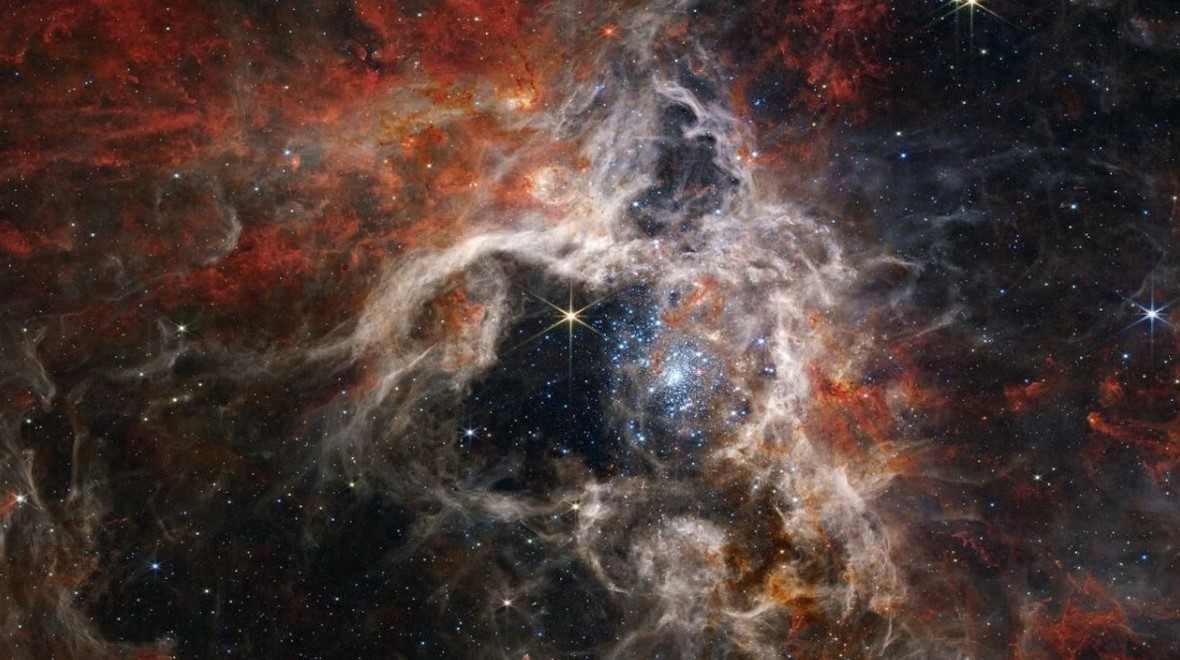 
Thousands of new stars were captured in an image of the Tarantula Nebula region released on Tuesday from the James Webb Space Telescope.

The image of the area (technically called Doradus 30) was shared in a new report by the European Space Agency (ESA) and offers unprecedented views from the collaborative project with NASA.


"In this mosaic image stretching 340 light-years across, Webb's Near-Infrared Camera (NIRCam) displays the Tarantula Nebula star-forming region in a new light, including tens of thousands of never-before-seen young stars that were previously shrouded in cosmic dust," the ESA reported.

"The most active region appears to sparkle with massive young stars, appearing pale blue. Scattered among them are still-embedded stars, appearing red, yet to emerge from the dusty cocoon of the nebula," it added.

The region was also imaged using the Mid-Infrared Instrument (MIRI) to better display the different wavelengths.

2/ Webb's #NIRCam image of the nebula resembles a tarantula's home lined with silk. The nebula's cavity has been hollowed out by blistering radiation from a cluster of young stars, sparkling pale blue in the image.


The stunning new details in the image reveal gas and dust in the nebula, along with distant background galaxies. The dense gas is noted as the material that will be used to form future stars.

"Astronomers used two of Webb's spectrographs to take a closer look at this region and determine the chemical makeup of the star and its surrounding gas," the ESA stated. "This spectral information will tell astronomers about the age of the nebula and how many generations of star birth it has seen."

The Tarantula Nebula is located within the Large Magellanic Cloud, a satellite galaxy of the Milky Way that is 163,000 light years from Earth, according to NASA. Within the region lies star cluster R136, one of the most energetic known star clusters.

The image is among many discoveries from the James Webb Space Telescope. The Daily Wire previously reported that the telescope captured the first direct image of an exoplanet - a planet beyond our solar system - in another first for the new space project.

The image was released on Thursday by NASA with four different light filters.

"This is a transformative moment, not only for Webb but also for astronomy generally," said Sasha Hinkley, associate professor of physics and astronomy at the University of Exeter in the United Kingdom, who led these observations with a large international collaboration.

The Webb Telescope is expected to operate for at least five years, with a goal of sending data for up to a decade. Its location is one million miles from Earth (1.5 million kilometers), according to the telescope's website.

At just 21.7 feet wide (6.6 meters), the relatively small device is making a giant impact through each image it communicates to Earth, offering glimpses of the universe previously never seen.
Go Back