Sunday Early Voting Site Debate Is Not About “Voter Suppression”


The North Carolina State Board of Elections (SBE) chose between competing "one-stop" early voting plans for several counties in their September 13 meeting. They will make final decisions about some other counties on September 20. One of the major areas of disagreement was Sunday voting.

Ahead of that meeting, the North Carolina Black Alliance put out a media release via email entitled "Voting Rights Under Attack in Counties Across NC." The group wants one-stop sites open across the state for both Sundays during the early voting period and considers not opening them on Sundays to be part of "subversive tactics of voter suppression rising in our state."

Why do they claim that?

Sunday Voting in 2020 By the Numbers

As can be seen with the John Locke Foundation's Vote Tracker app, 44 counties offered one-stop voting during the first Sunday of the early voting period in 2020 (October 18). Thirty-two percent of the voters on that day were Black and 47 percent were registered Democrats.

Forty-six counties offered one-stop voting on the second Sunday (October 25). Twenty-two percent of voters on that day were Black, and 35 percent were Democrats.

Voters in a majority of counties did not have access to any Sunday voting. Among all one-stop voters in 2020, 22 percent were Black, and 35 percent were Democrats.

Sundays typically have the smallest turnout of any day of one-stop voting. The figure below gives a look at the turnout for each day of one-stop voting in Mecklenburg County. The two Sundays, October 18 and 25, had the lowest number of votes. That was typical for most counties. Wake County was a notable exception, with Sunday voting being slightly higher than Saturday voting on both weekends. 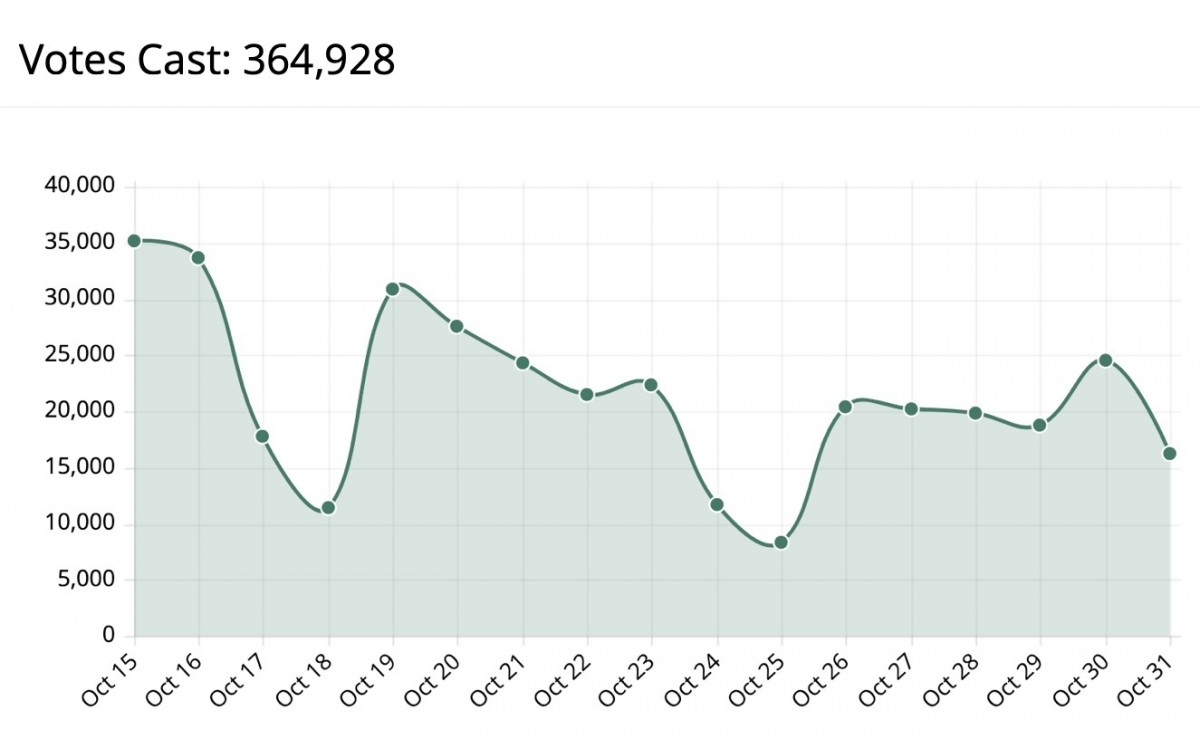 Sunday one-stop sites are typically open only on Sunday afternoons to accommodate church services for voters and election workers. There is little reason to believe that opening them on Sunday mornings would significantly increase turnout on those days, however. It is more likely that people would rather do other things with their Sundays. That contention is supported by the fact that Saturdays are the second least popular days to vote.

Souls - or "Racialized Social Constraint" - to the Polls

Sunday one-stop voting is associated with "souls to the polls," efforts by black churches and progressive groups to organize black voters after church on Sundays. Indeed, churches such as Saint Joseph AME in Durham held events such as voting caravans after Sunday services.

Of course, if Sunday voting was not an option, active voters would simply vote another day. The real targets of "souls to the polls" are reluctant Black voters or conservative Blacks who might have considered voting Republican. Using the social pressure of "group expectations" to "unify" Blacks in support of Democrats is what researchers Ismail K. White and Chryl N. Laird call "racialized social constraint" in their book, "Steadfast Democrats":

Since the 1960's blacks have become increasingly more moderate and even conservative on a number of important political issues including certain racial policies." Despite this viewpoint diversity, black voting behavior is particularly strategic and described in the book as, "racialized social constraint." Racialized social contraint [sic] is a process of norm compliance reinforced by in-group informational cues.

So, "souls to the polls" events are a means of putting social pressure on Blacks to vote Democratic through urging them to vote soon after Sunday church service. Presumably, an effort to get white evangelicals to vote immediately after church services would net a similar gain for Republicans.

Every day of one-stop voting costs county governments money. For example, the Columbus County report to the SBE on competing early voting plans showed that the one-stop plan without Sunday voting would cost the county $46,098, while the plan with one Sunday of voting would cost $49,644.

That $3,546 difference is not an insignificant amount in a small county like Columbus. Money spent on keeping one-stop voting sites open on Sunday is money that cannot be spent on things such as training for election workers or servicing voting equipment. The question is whether the increased opportunity to cast ballots is worth the additional expenditures.

Opening one-stop voting hours beyond what is needed to serve voters adequately wastes taxpayers' money and unnecessarily exhausts election workers. It also makes if harder for the major parties to cover all one-stop voting hours with election observers, the volunteers who watch over voting locations to help assure transparency and security in the voting process.

Advocates for Sunday voting say the cost is worth it, despite the relatively low rate of voting. As seen in public comments to the State Board of Elections, they believe that some people can only make it to vote on Sundays. If that were true, then North Carolina would be vulnerable to claims that voters in counties that do not offer Sunday voting are not being treated equally.

A Solution to Save Resources, Rest Election Workers, and Treat All Voters Equally

To balance the desire of some groups to have early voting on Sunday with the need to provide a day of rest to election workers and observers, the General Assembly should consider mandating Sunday voting statewide on the first Sunday of the early voting period and closing all one-stop voting locations on the second Sunday. Requiring voting statewide on the first Sunday would give voters across the state equal access to one-stop voting. Closing for the second Sunday would give election workers and observers a break about halfway through the early voting period. It is a compromise that would balance the competing considerations around Sunday voting.
Go Back