More foods will be gene edited than you think

By Camille Su for The Epoch Times

Gene editing has long been primarily used for research, treatment, and disease prevention. Currently, this technology is increasingly being applied to modify agricultural products to create more “perfect” species. More and more genetically edited foods are appearing on the market, including high-nutrient tomatoes and zero-trans-fat soybean oil.

Some argue that gene-edited foods are safer than genetically modified (GM) foods (pdf). The U.S. Department of Agriculture (USDA) specified in 2018 that most genetically edited foods do not need to be regulated. However, are these foods, which will increasingly appear on the table, really risk-free?

In September 2021, the first gene-edited food—Sicilian Rouge tomatoes—made with CRISPR-Cas9 technology were officially on sale.

Japanese researchers remove a gene from the genome of the common tomato. After the gene is removed, the activity of an enzyme in tomatoes increases, promoting the production of GABA. The GABA content in this tomato is four to five times higher than that of a regular tomato.

Warren H. J. Kuo, an emeritus professor of the Department of Agronomy at National Taiwan University, explains that both gene editing and transgenic organisms are genetic modification, also known as genetic engineering.

The earliest technique was genetic modification, that is, transgenic—in which a plant or animal is being inserted a gene from another species, such as a specific bacterial gene. The purpose of artificially modifying plants and animals is to improve their resistance against diseases and droughts, promote growth rates, increase yields, or improve nutrient content. However, the finished product will exhibit the foreign species’ genes.

Back in 2019, the United States had used another earlier gene-editing technique to create soybean oil with zero trans fat and introduced it into the market.

Gene-edited foods which have also been approved for sale worldwide by now include soybeans, corn, mushrooms, canola, and rice.

The number of genetically edited foods on the market is likely to increase. Patent applications relating to CRISPR-edited commercial agricultural products have skyrocketed since the 2014/2015 period. 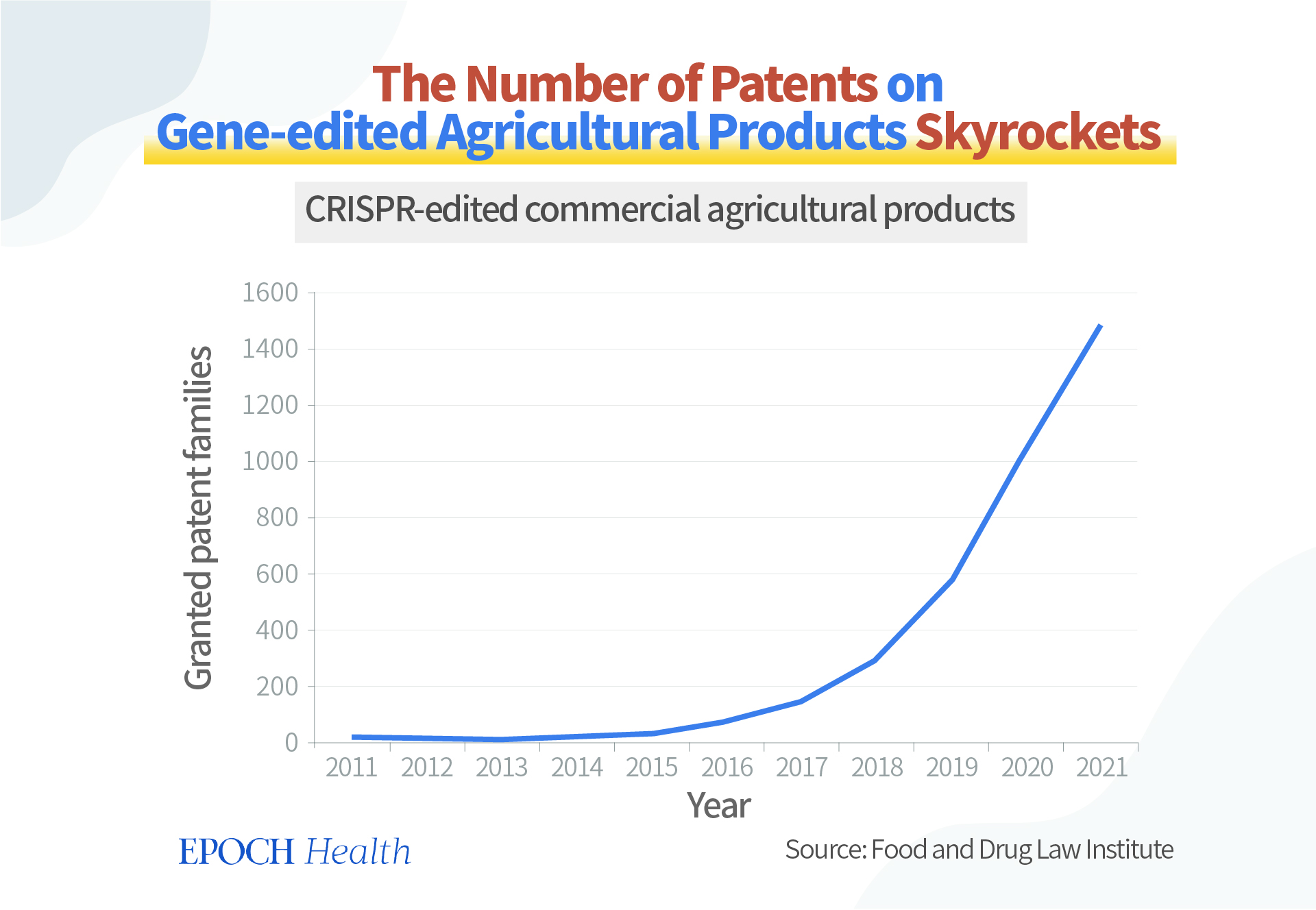 Proponents of genetic modification believe this is a method to perfect agricultural produce and solve problems such as pests, droughts, and nutritional deficiencies. But the technology is still a double-edged sword.

“Genetic engineering indeed has its benefits in the short term, but it may bring long-term pitfalls,” said Joe Wang, molecular biologist. Wang is currently a columnist with The Epoch Times.

Hornless cattle were once the celebrity of the animal kingdom, appearing in news stories one after another.

Many breeds of dairy cattle have horns, but they are dehorned to prevent them from harming humans and other animals, and to save more feeding trough space. To solve the “problem” of horns, the gene editing company Recombinetics successfully produced hornless cattle with gene-editing techniques many years ago.

The company simply added a few letters of DNA to the genome of ordinary cattle and their offspring didn’t grow horns, either.

However, a few years later, an accident happened.

The FDA found that a modified genetic sequence of a bull contained a stretch of bacterial DNA including a gene conferring antibiotic resistance, which has been one of the global health crises in recent years. Scientists aren’t clear whether this gene in gene-edited cattle will pose a greater risk than expected or not, and the FDA has stressed that it’s hazard-free. However, John Heritage, a retired microbiologist from Leeds University, told MIT Technology Review that the antibiotic resistance gene could be absorbed by gut bacteria in cattle and could create unpredictable opportunities for its spread.

In fact, this is one of the currently perceived risks of genetically edited foods.

The problem with unexpected accidents in the genetic modification process occurs in GM foods because transgenic techniques cannot control where the foreign gene is embedded in the chromosome.

In contrast, emerging gene editing techniques allow for more precise modification of specific genes (pdf). It’s like a tailor modifying a section of a zipper by cutting off a specific segment and replacing it with a new one. However, there may be mistakes and unexpected changes in the process of cutting and repairing, and another similar section of the zipper may also be cut off.

Kuo says that this process may have unforeseen side effects; for example, if during this, new allergy-causing proteins or new toxins are produced.

“The genetic engineering procedure, and this includes gene editing, has the potential to damage DNA,” said molecular geneticist Dr. Michael Antoniou, head of the Gene Expression and Therapy Group at King’s College London, in an interview in April 2022. “If you alter gene function, you automatically alter the biochemistry of the plant …  included within that altered biochemistry can be the production of novel toxins and allergens … that is my main concern.”

Another major concern with GM foods is herbicide residue.

Most crops, whether genetically edited or genetically modified, have herbicide-resistant genes incorporated into them. This is done so that when herbicides are applied to crops for weed control, the crops themselves won’t be harmed.

Since the introduction of herbicide-resistant GM crops in 1996, herbicides have experienced a significant growth in application every year. The herbicides residue in the crops grown are increasing as well.

One of the most widely used herbicides is glyphosate under the trade name Roundup. The International Agency for Research on Cancer (IARC) classifies glyphosate as a Group 2A carcinogen that is probably carcinogenic to humans.

In addition to carcinogenic concerns, glyphosate may have more harmful effects. They have collected and reviewed 286 studies and indicated that glyphosate inhibits the activity of an enzyme in the mitochondria of liver cells—cytochrome P450—which has the ability to detoxify and decompose foreign toxic substances. Moreover, glyphosate also has adverse effects on the gut microbiota. 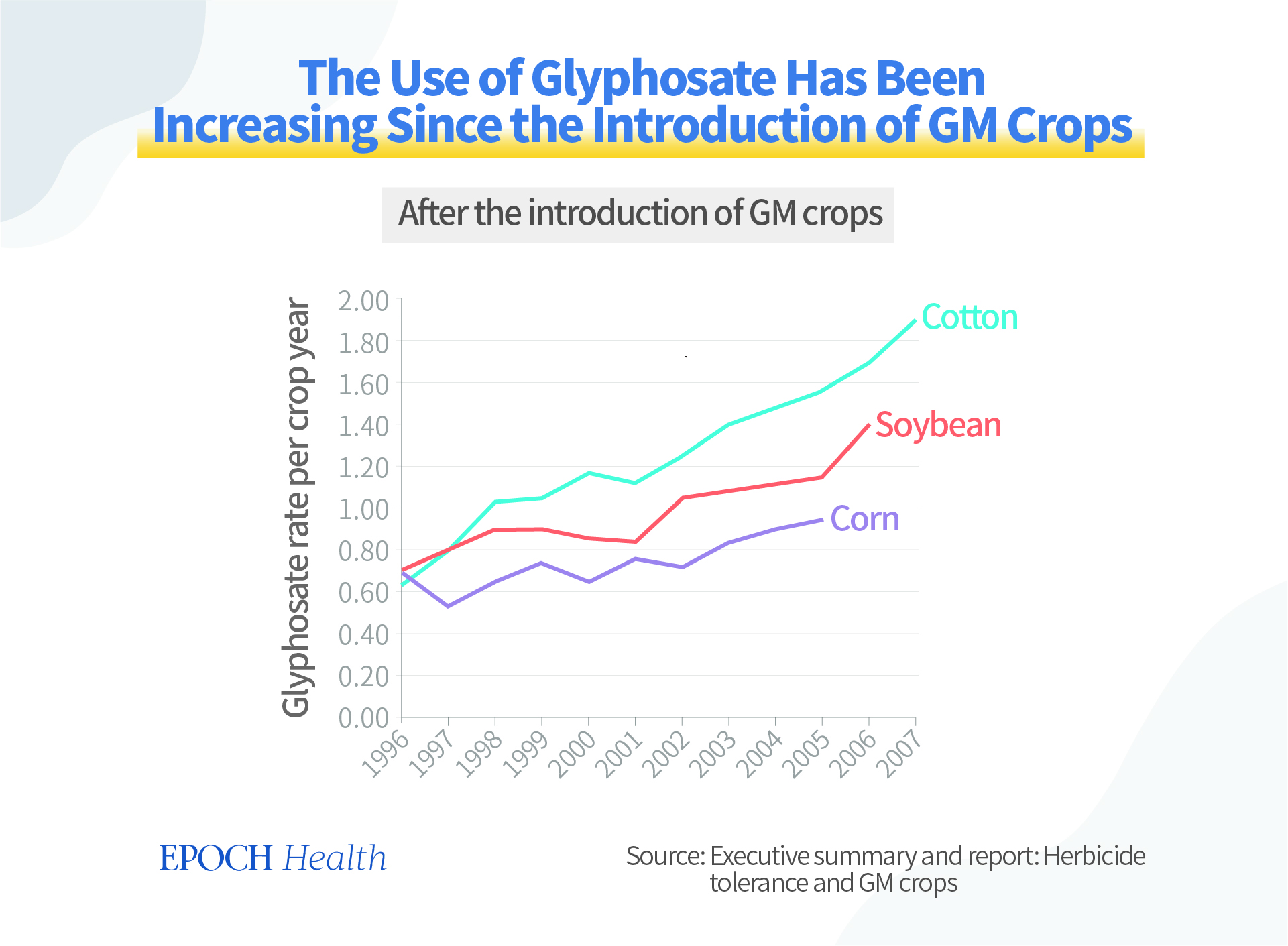 Should Gene-Edited Food Be Regulated?

The debate over whether GM food is safe or not has not yet settled. Many advocates of transgenic modification and gene editing believe that people have been eating GM crops for 20-plus years and still there is no evidence that they have caused problems to human health. Other argue they contribute to long term harm that is still being measured.

Kuo said that GM food is not a highly toxic drug causing immediate problems. Health problems can be the result of something cumulative, and hard to relate back to a single food cause. Whether GM foods are the culprit of such health problems has not been proven, nor ruled out.

At present, various countries have adopted an early warning principle for GM foods, stipulating that merchants label their products. It is the consumer’s decision to purchase them or not.

Will gene-edited food require specific labeling? Some argue that because these foods do not exhibit foreign genes, there should not be such regulation. Kuo believes this is a misleading argument, given that the tool used to edit the original genes were in fact foreign genes, and the method carries the risk that these foreign genes may not be completely removed.

Currently, the regulations for gene-edited foods in various countries are much looser than those for GM foods.

The USDA has consistently stated that gene-edited agricultural products are not regulated. Plant technologists are usually given the green light within months after submitting inquiries to the agency, allowing them to grow gene-edited foods without oversight.

In addition to the United States, Brazil and Australia and other countries have also adopted similar regulatory approaches. European regulations are still more stringent.

Antoniou argues that since these GM agricultural products are not monitored, the unexpected genes that they carry are released into the environment and will cause harm to it. They may also cause harm to the public due to the scientific community’s insufficient understanding of their risks.

Wang said that scientists who support gene editing believe that what they are doing now will also happen in nature, albeit at a slower pace. They simply speed it up. “However, humans are not gods and cannot control everything. When humans do such things, the odds of mistakes and danger are definitely higher than what happens naturally,” Wang said.

“We humans have violated the laws of nature for a long time,” Kuo said.