Political polls should not be taken too seriously 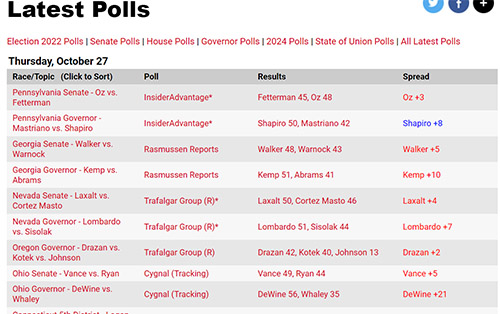 Ever wonders why political polls are so often so wrong?  We have and while we chalk it up to pollster’s bias, The Washington Free Beacon staff has published and article that explains how to read polls.  They explain that each polling group is adjusted based on the actual accuracy of that group in prior elections.  They report:

An analysis of recent polling in swing states found that Republicans may be on the cusp of major electoral gains if you consider the pollsters’ historic performance—or, more often, lack thereof.

The Polling Monitor, a project that launched this cycle, aims to give the public a more accurate understanding of polls that have in previous years been so off—Trump’s 2016 victory took the pollsters and, as a result, most of the public, entirely by surprise, for example, and in 2020 Republican congressional candidates made gains in places no polls suggested they could. The Polling Monitor calls this an "adjustment factor."

A CNN poll released on Monday, for example, found Fetterman leading Oz by 5 points, pulling in an impressive 51 percent of the vote. The Polling Monitor, however, found that CNN polling in Pennsylvania over the past three election cycles is off by an average of 8.8 percentage points in favor of Democrats. It says the poll showing Fetterman up by 5 should really be viewed by the public as an indication that Oz, the Republican, is up by 3.8. A CBS/YouGov poll this week found Fetterman up 51 to 49, but their Pennsylvania polls have been off in favor of Democrats by an average of 6.4, and it should also be viewed as data putting Oz in the lead, according to the analysis.

The effort comes as polling errors have solidified themselves as a fact of life in politics, and the industry's failures have had major repercussions. Polls are about more than just helping the public know what to expect on Election Day—the results also shape media coverage, voter turnout, and political donations, according to Spencer Abraham, who cofounded the Polling Monitor.

"What the media chooses to cover or not cover is based on polls saying an election is close or not close," Abraham told the Washington Free Beacon. "We think that the public should be able to understand polling to the best extent they can, and that's what we try to provide. Our goal is to share and give the world a tool to use to better understand where elections stand."

"We're just trying to add a tool that could be used to analyze the data a little better," Abraham said.

The database shows that some races being treated as close by the media likely won't be nail-biters on Election Day. In the Ohio Senate race, polls show a tight race between Democratic congressman Tim Ryan and Republican J.D. Vance, but pollsters seemingly always underestimate Republican performance. The Polling Monitor found that even the Trafalgar Group, a conservative polling outfit that recently found Vance up 3, needs an adjustment factor of 3.2 percentage points toward Republicans to be accurate. Pollsters at Suffolk University, which found the race to be neck and neck, earned an adjustment factor of nearly double digits toward Republicans.

Though polling error usually benefits Democrats in surveys, it's not always the case, according to the database. Trafalgar Group polls in Georgia, for example, were found to overstate the Republican vote share by 4.5 percentage points.

Pollsters say they are making efforts to produce more accurate surveys, but there are many challenges facing the industry. Among them are the death of the landline telephone, an unwillingness by many to talk to pollsters, and increased cost of conducting reliable polls.

We appreciate these data, but we are still skeptical the “adjustment” protocol is sufficient.  We suspect two adjustments are needed:  One two weeks before the election and another based on actual election results.  Our sense is that some of the polls know all along they are biased but in the final runup before election day they actually begin to pull their results more into the realm of reality.  Beyond that, our rule is:  Don’t take the polls to seriously at all.