What Do North Carolina Parents Think About Education and Their Schools?


Note: This article is the first in a four-part series. The first article will provide a brief review of results of three key questions regarding parents' views on the direction of education, how well our schools are performing, and major challenges facing our schools. The other articles will discuss teachers, what's going on in the classroom, who should direct the education of our children, and school boards. Before we review those topics, let's look at some key results

Local school boards are a staple of American democracy. In North Carolina, over 800 board members are elected to serve varying terms on 115 school boards throughout the state. The North Carolina Supreme Court has interpreted the State Constitution's guarantee of people's "right to the privilege of education" as a right to a "sound basic education."

Local school boards carry out this responsibility by performing three major functions: 1) maintaining general supervision and control of all functions pertaining to the public schools; 2) enforcing and executing school law; and 3) ensuring that the administration of schools is efficiently and economically accomplished. State law (Chapter 115C-47), the State Board of Education, and the North Carolina Department of Public Instruction outline policies, directive, and guidelines to aid in reaching these goals.

It shouldn't be forgotten that school boards are made up of elected individuals, who are ultimately responsible for representing the views of those they serve. However, the job of a school board member has changed dramatically in recent years. What was once considered an innocuous stepping stone to bigger and better political jobs is now suddenly at the vortex of social change, with many boards thrust into controversial decisions over such topics as school closures and re-openings, critical race theory, and gender identity.

These developments have motivated parental and citizen involvement, energizing a new generation of parent activists, leaders, and organizations all looking to affect schools by impacting the composition of the local school board and its policies.

With hundreds of school board members up for re-election in November, there is no better time to get a snapshot of what parents are thinking about education. Do parents like the direction of education in North Carolina? Do they think the schools are run well? What do they see are the major challenges facing our schools? Responses to these questions can aid the election process and inform school board members on public sentiment on important issues.

To that end, in mid-September the Civitas Poll was administered to 500 North Carolina parents with questions on a variety of topics. The poll's margin of error was +/-4.38 percent. Eighty-four percent of parents polled voted in the 2020 election. Poll results are available here.

The results and crosstabs offer a wealth of information on what parents think about education in North Carolina. This article will provide a brief review of results of three key questions regarding the direction of education, how well our schools are performing, and major challenges facing our schools. Let's look at some key results.

Is Education on the Right Track? 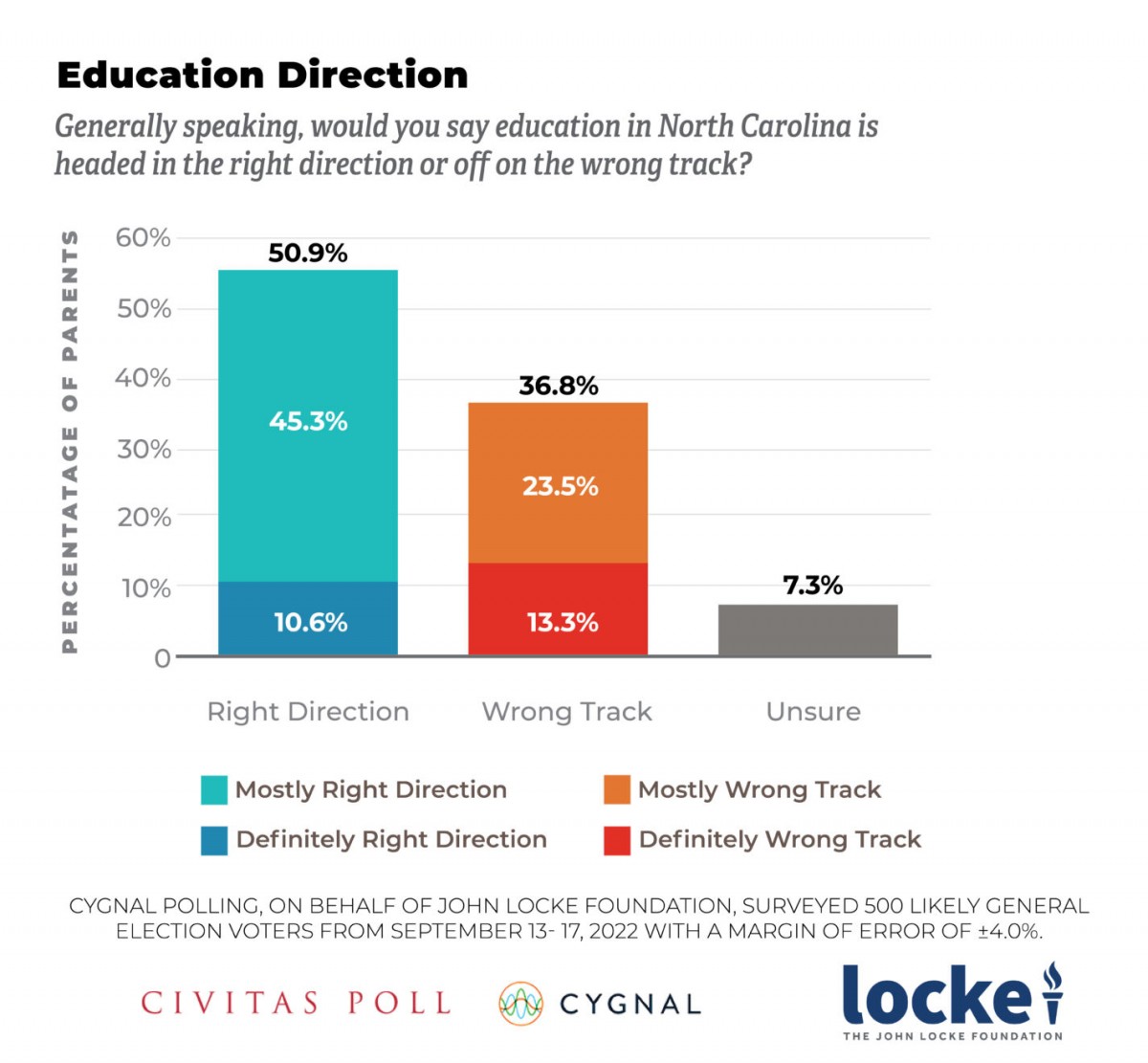 That's not to say everything is rosy. Get beneath the surface in the crosstabs and you begin to see differences emerge. For example, Democrats were more optimistic about the direction of education than Republicans and Independents. While 71 percent of Democrats agreed we're on the right path, those numbers were less for Republicans (46 percent) and Independents (49 percent). Fully half of all Republicans (50 percent) felt education was moving in the wrong direction, compared with 41 percent of Independents.

How Well Are Schools Performing?

The poll also asked parents how they thought public schools were performing. The vast majority of respondents said that the schools need to improve - the difference was on the severity of the changes needed. Republicans and Independents clearly favored major reforms, Democrats less so. 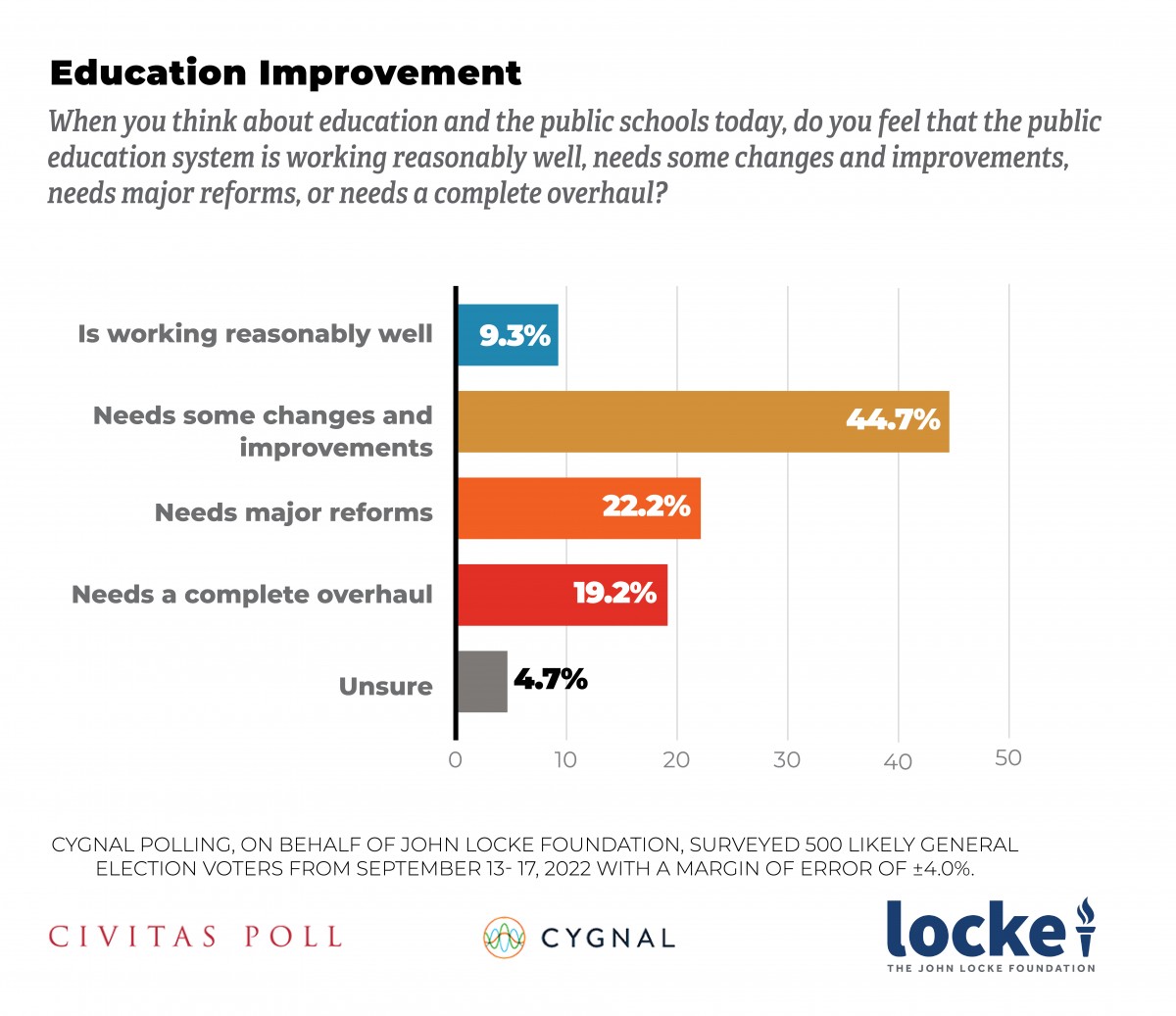 A large plurality of respondents - 45 percent - said public education "needs some changes and improvements." The next two most popular responses were "needs major reforms" (22 percent) and "needs a complete overhaul" (19 percent). Over 90 percent thought public schools needed some changes, with 41 percent thinking those changes needed to be dramatic.

What is also noticeable is the lack of confidence in the current public school system. Nearly one in five respondents said schools need a complete overhaul, and most of those were Republicans (23 percent) or Independents (26 percent). Only 9 percent said schools were "working reasonably well."

Yes, considering only 9 percent of parents surveyed thought the education system "is working reasonably well," it is surprising to find that 56 percent said education in North Carolina is on the right track. That topic might bear further discussion later.

Respondents were also asked to identify the biggest challenges facing the public schools. The most common response - although not by a large margin - was "Teacher shortages and lack of staff" (19 percent). Directly behind it was "Schools are not safe and there is too much violence in schools" (14 percent) and "Education has become too politicized" (12 percent). 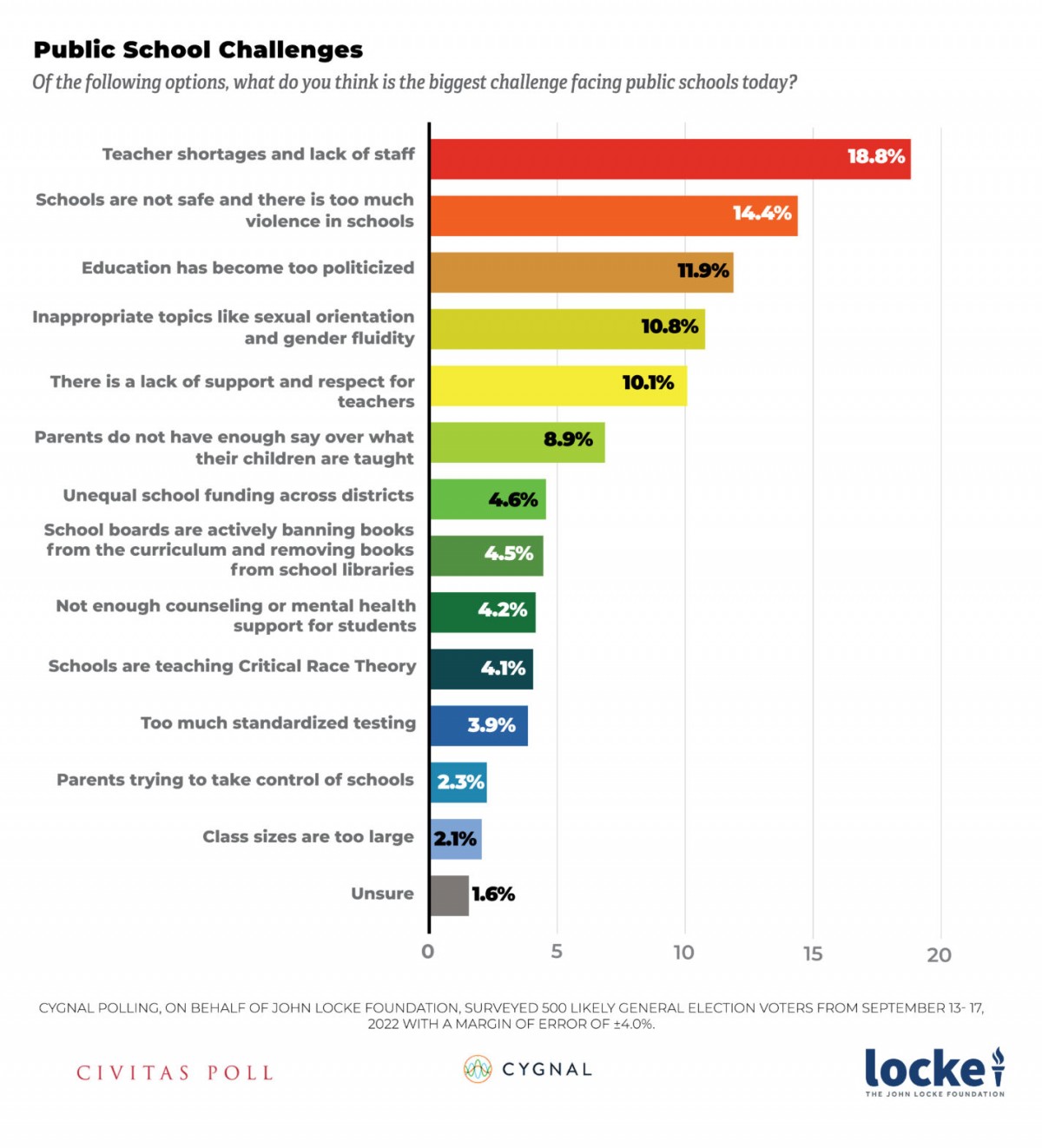 With a cursory review of the data, no single challenge jumped out. Attention was splintered. Still discontent is roiling beneath the surface. Summing responses such as education is too politicized (11.9 percent), inappropriate topics taught in school (10.8 percent), parents don't have enough say over what their children are taught (8.9 percent), and Critical Race Theory (4.1 percent) totals 35.7 percent of respondents, meaning over one-third of all parent respondents were concerned with what students were being taught. That number tops the most frequent response "teacher shortages and lack of staff" (18.8 percent) and the "schools are not safe (14.4 percent). The three highest responses still produced less than 50 percent of responses, however.

Democrats (24 percent) were more concerned about teacher shortages and lack of staff than Republicans (19 percent) and Independents (12 percent). Republicans (21 percent) were more concerned about inappropriate topics like sexual orientation and gender fluidity. Meanwhile, school safety and violence in the schools were a big concern among registered Democrats (18 percent), Independents (16 percent) and Blacks (25 percent).

What did we learn? North Carolina parents are generally happy with the direction of education although an uneasiness persists. Most everyone agrees improvements are needed to our schools. Parents of all persuasions also agree there are challenges facing our schools, but what those challenges are depends on who you ask.

In the next article in this series, we will look at results from poll questions regarding how schools address the topic of controversial books and the teaching of sex and gender in the classroom.
Go Back