The first article in this four-part series highlighted how education issues have thrust local school boards to center stage in the struggle for political and cultural change. It also discusses what parents think about the direction of education, how the public school system is performing, and what are the major challenges facing our schools.

This second article reviews poll findings concerning what parents think about how controversial books and topics are handled in the schools, as well as whether parents have a right to medical and psychological information about their child. Let's review some of the results.

How to Decide Questions of Controversial Books

In recent years, there has seemed no shortage of controversies concerning which books should be available in the classroom or in a library. Last year, parents in Wake County, the state's largest school district, filed a criminal complaint charging the district with distributing "obscene and pornographic material." In recent months, protestors have lobbied the school board to remove several books from school libraries.

The poll asked parents how schools should handle the presence of controversial books in the classroom or libraries. 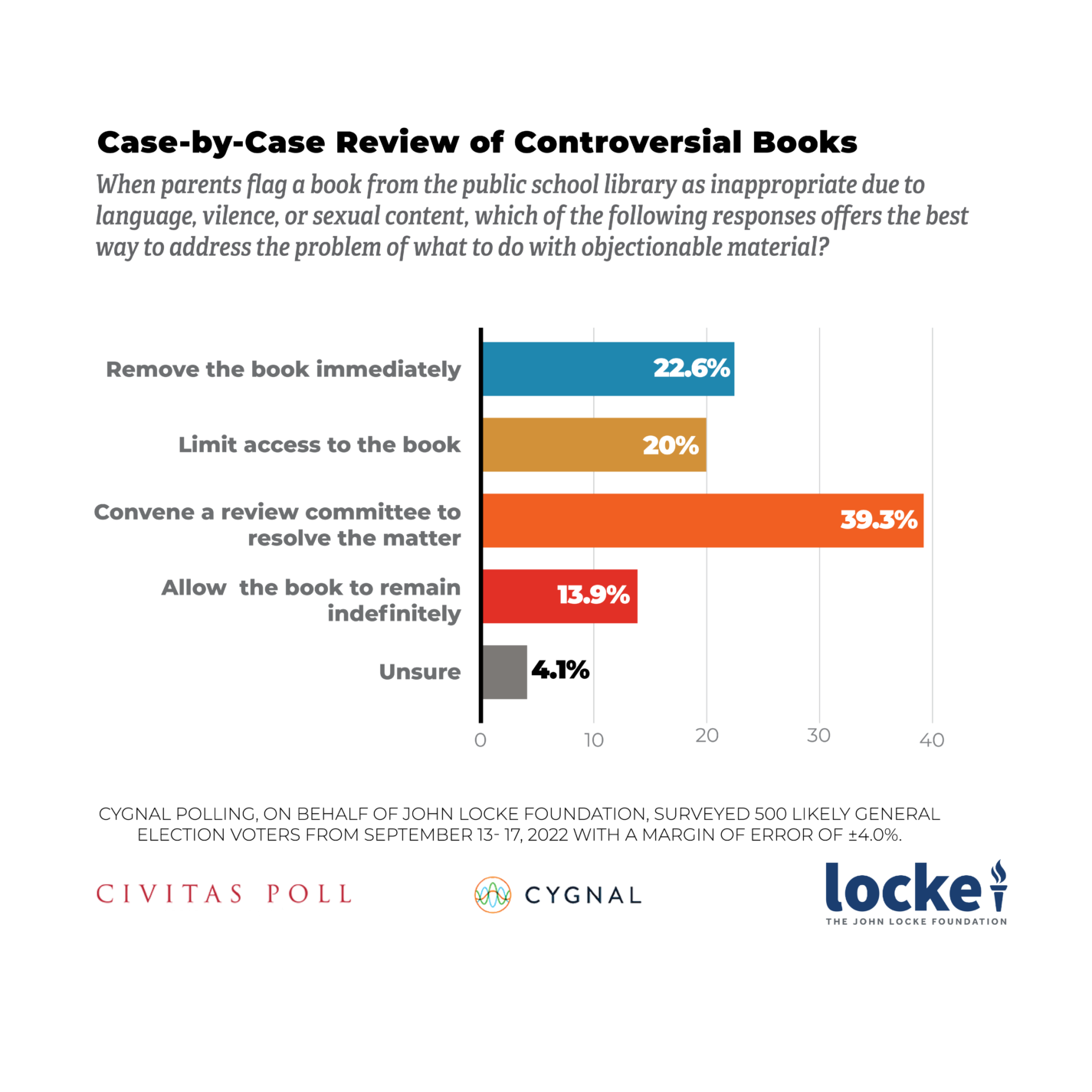 By a wide margin, most parents (39 percent) said controversial books should be reviewed on a case-by-case basis. How strong was this sentiment? Support for convening a review committee to decide each matter had strong support across the political spectrum - Republicans (32 percent), Democrats (43 percent), and Independents (45 percent). It had similarly strong support levels from respondents according to sex, geography, race, age, and education level. Providing yet more evidence that parents consider controversial books in the schools a real problem is the fact that the next two most common responses were "Remove the book immediately" (22 percent) and "Limit access to the book" (20 percent). Very few parents - only 14 percent - said that a controversial book should remain indefinitely on the shelves.

How to Handle Objectionable Material 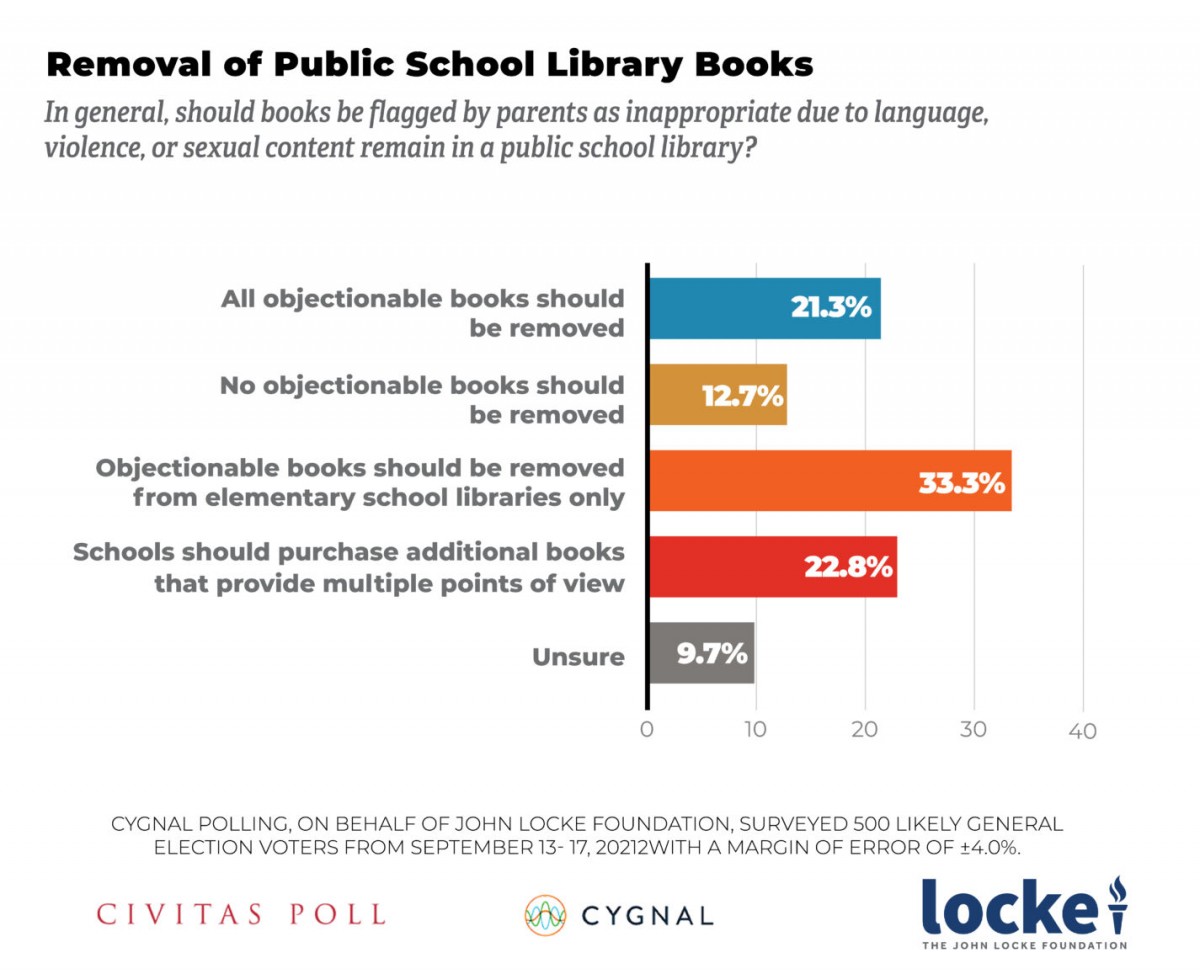 Again, a look at the crosstabs is helpful. Support for the dominant response - to remove objectionable books from elementary school libraries only - was deep and widespread among many groups. It was not partisan: 34 percent of Republicans along with 33 percent of both Democrats and Independents supported the option. Nor were there racial differences: 35 percent of Whites and 34 percent of Blacks supported removing objectionable material from elementary schools. Geographically, it was supported by 38 percent of rural respondents, 30 percent of suburban respondents, and 32 percent of urban respondents. Interestingly, responses from all income levels were strong, ranging from 31 percent among those with incomes less than $40,000 per year to 36 percent among those with annual incomes over $100,000. These results clash with the narrative that North Carolina parents are deeply divided on the issue of what to do with objectionable materials. 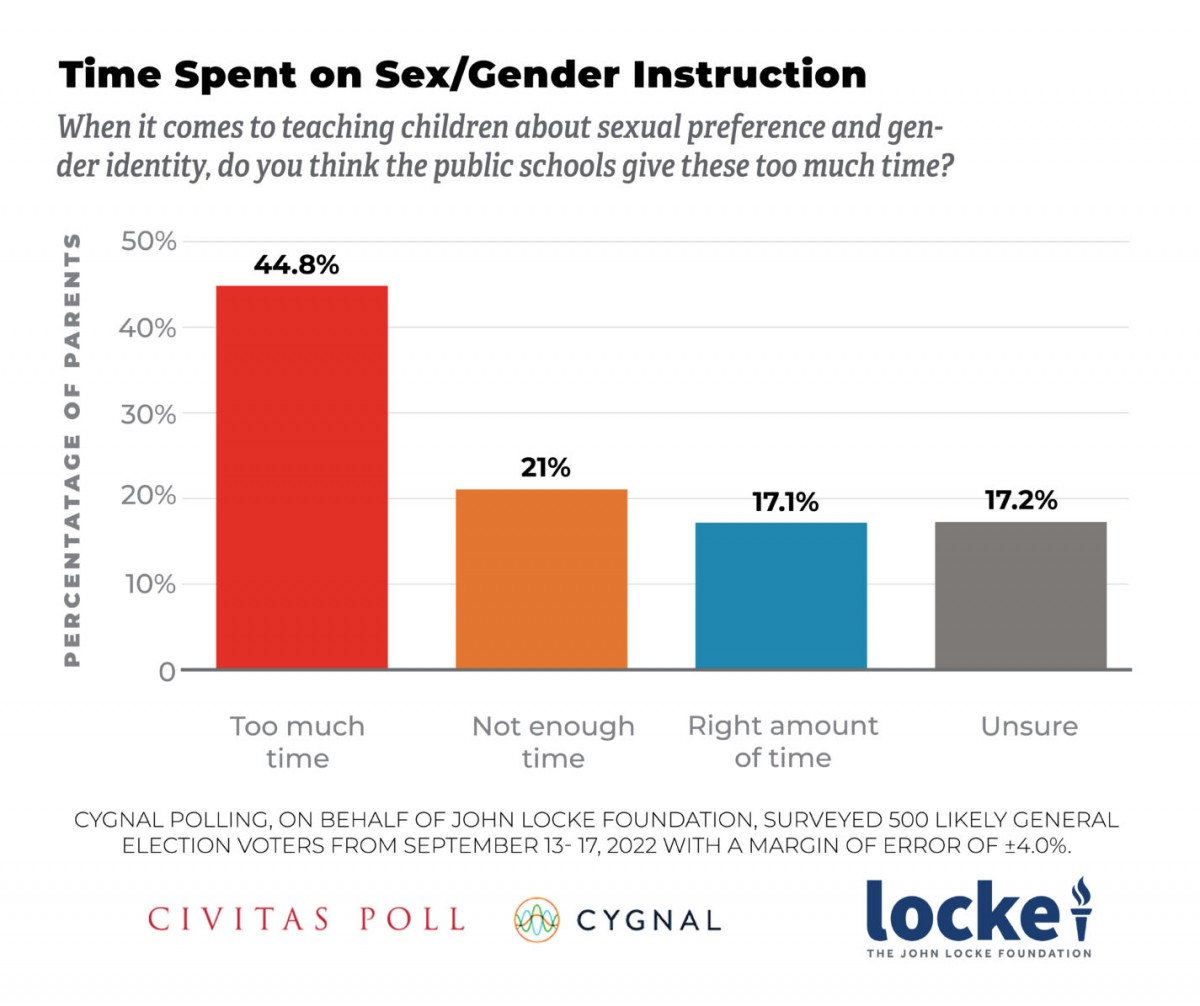 The poll found a sharp partisan divide on this question: 64 percent of Republicans and 48 percent of Independents said "too much time" is spent teaching children about sexual preference and gender identity, but only 26 percent of Democrats did. A larger proportion of Democrats (30 percent) selected the option "right amount of time." There was also a large racial divide, as 51 percent of Whites selected "too much time on sex/gender instruction," compared with 29 percent of Blacks.

Parental Right to Access a Child's Medical and Psychological Information, Including Gender Identity

Finally, the poll asked a question regarding how schools address the issue of informing parents about a child's gender identity and whether parents deserve to be privy to their child's medical and psychological information. 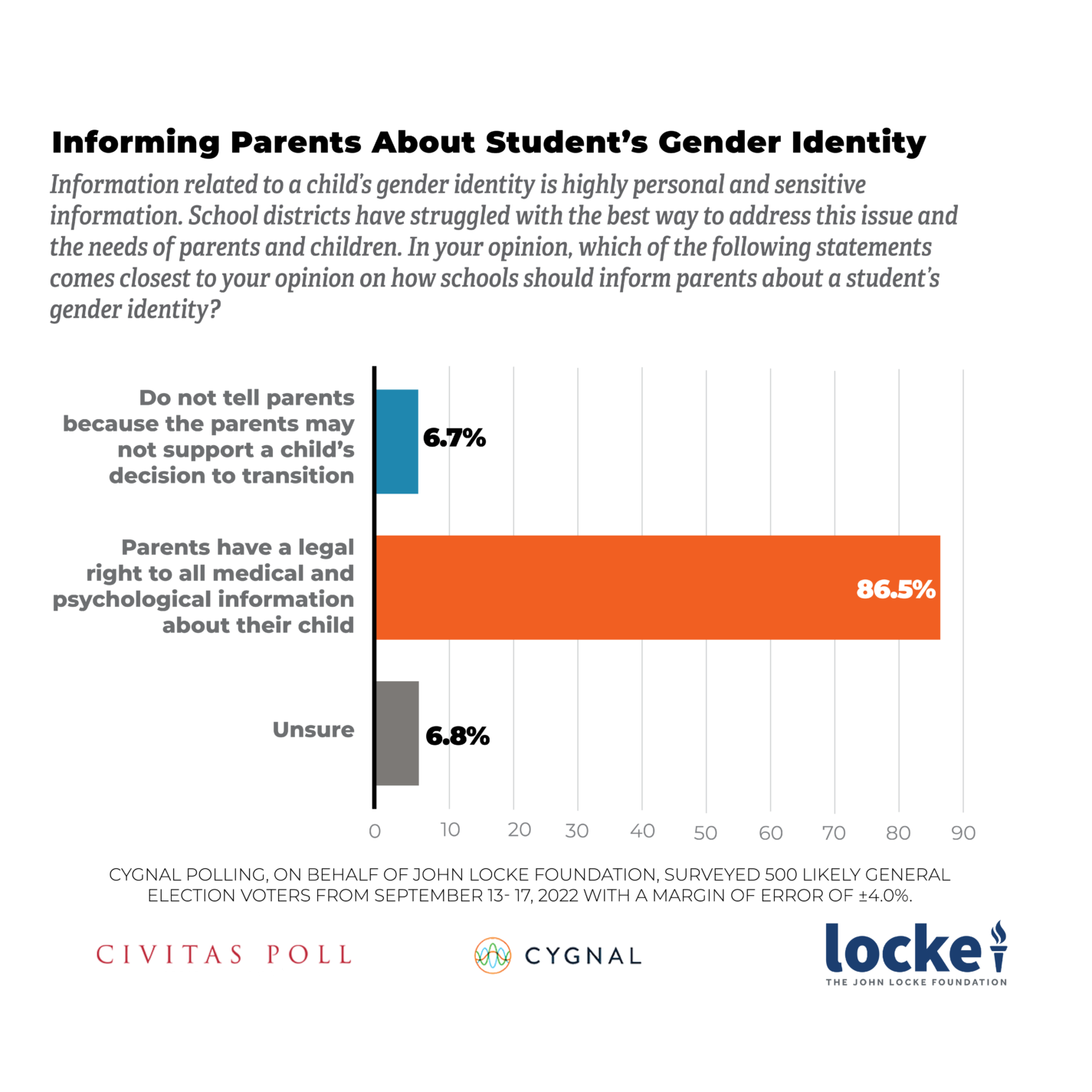 This finding revealed very strong and definitive support of parental rights to guide their child's medical care and psychological development.

Controversial books, the teaching of sexual orientation and gender identity, and parental access to their child's medical and psychological information are some topics of greatest concern to parents and policymakers alike. School districts in North Carolina have handled these subjects in ways that have either affirmed or alienated parents. Poll results found support for school committees reviewing and removing objectionable books and spending less time teaching about sexual preference and gender identity. They also found deep and overwhelming support for providing parents access to their child's medical and psychological information. The third and final articles in this series will explore parents' views on teachers, what's going on inside their child's classrooms, and what parents think about local school boards.