Who Do NC Parents Trust for Education Decisions, and How Do They Grade School Boards? | Eastern North Carolina Now

Who Do NC Parents Trust for Education Decisions, and How Do They Grade School Boards?


Voters across North Carolina will soon go to the polls to elect school board members in 115 districts. These elections are significant because they will help determine what and how our children learn and how our schools are administered.

To call the last two years frustrating for parents, educators, and students would be an understatement. Politicians and school officials closed schools and substituted online instruction for classroom learning. School districts have been embroiled in controversies over the teaching of Critical Race Theory and sexual orientation and gender identity. Parents continue to feel marginalized by school officials. They have difficulty finding out what is taught in the classroom and may even be prevented from accessing all their child's medical or mental health records.

A recent Civitas poll surveyed parents on those and other topics. This research brief reviews poll findings of who parents consider the best equipped individuals to make decisions about how and where children are educated, who they trust to have the "right" position on disputed education issues, and what they think about school boards. It's the final brief in a four-part series reviewing poll results. Previous entries examined parents' views on the general direction of public education and public schools, schools' handling of controversial books and topics, and teachers and classroom matters.

Who Should Direct a Child's Education?

The Civitas poll asked North Carolina parents who they think can best determine how and where a child is educated: parents and guardians, the State Board of Education, local school boards, the state legislature, or school principals. 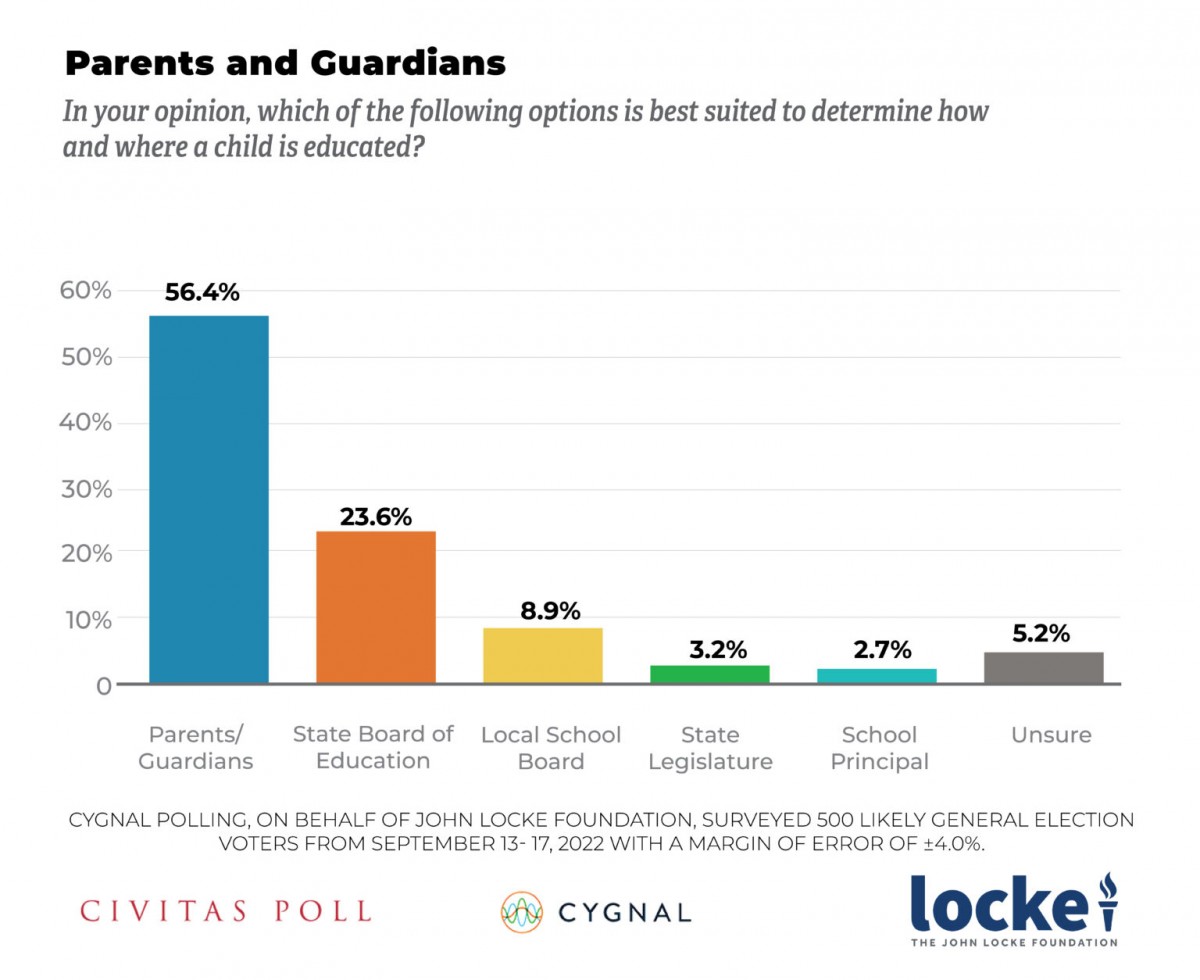 After parents/guardians, the next most frequent response was the State Board of Education, supported by about one-fourth (24 percent) of respondents. Democrats (36 percent) were most likely to favor that option, followed by high income earners (above $100K) and the highly educated (both at 30 percent) - but they all favored parents at higher rates.

Those two responses garnered 80 percent of respondents. Only a handful of parents apiece supported the other four responses, with local school boards getting the most (9 percent).

Who Do Parents Trust to Solve Education Issues?

A second question asked parents which group they would have more confidence in to have the "right position" on a disputed education issue, a group of parents or teachers. Specifically, the poll asked: 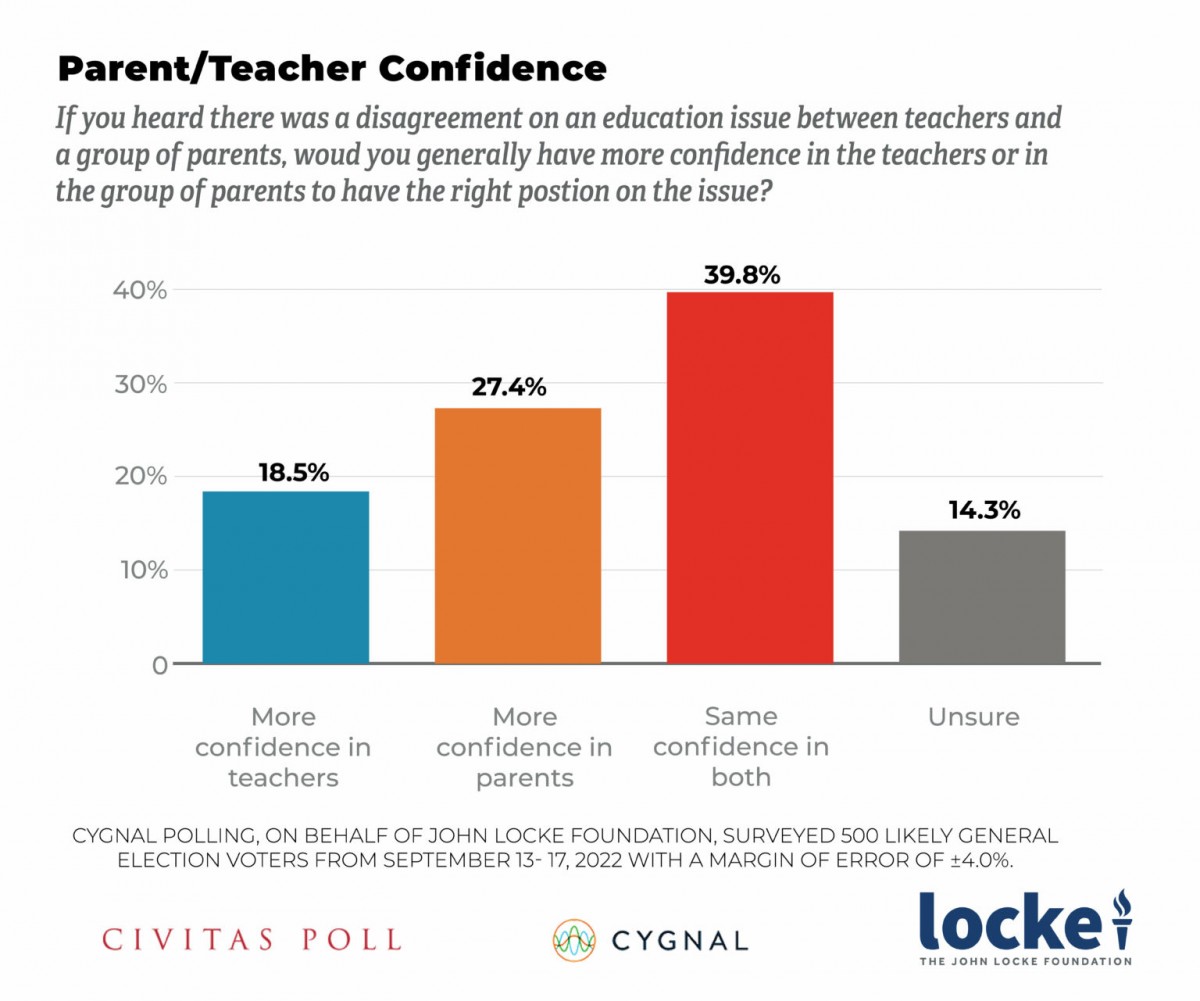 A majority of respondents (40 percent) said they had the "same confidence" in parents and teachers. Another 27 percent had more confidence in parents, while 18 percent trusted teachers more.

What Is the Proper Role for School Boards?

Next the Civitas Poll asked parents about the proper role of a school board. Specifically, we asked: 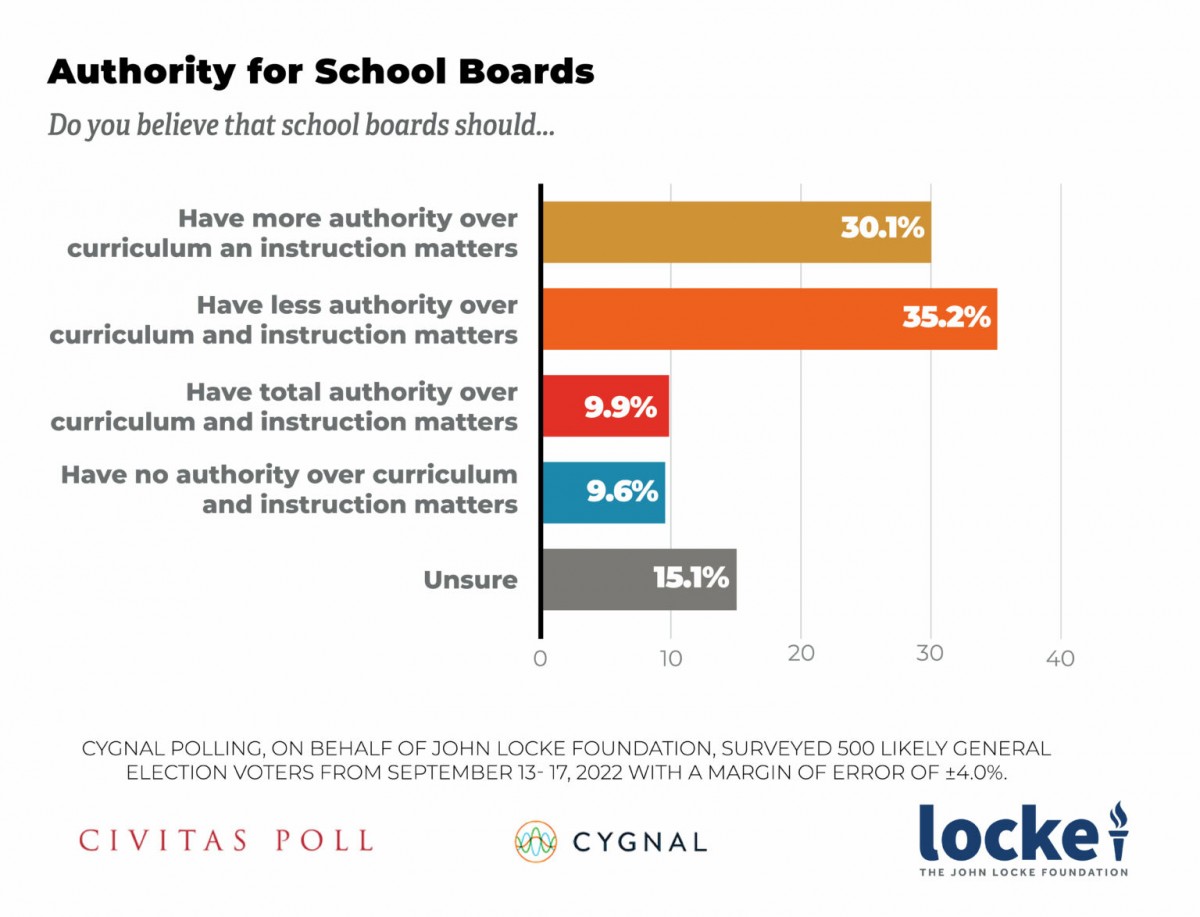 What did we find? A little over a third of respondents (35 percent) said school boards should "have less authority over curriculum and instruction matters." The next highest response (30 percent) favored "more authority." The other two responses, granting either total authority or none, were less popular, garnering about 10 percent each.

The poll concluded by asking parents to grade the work of school boards: 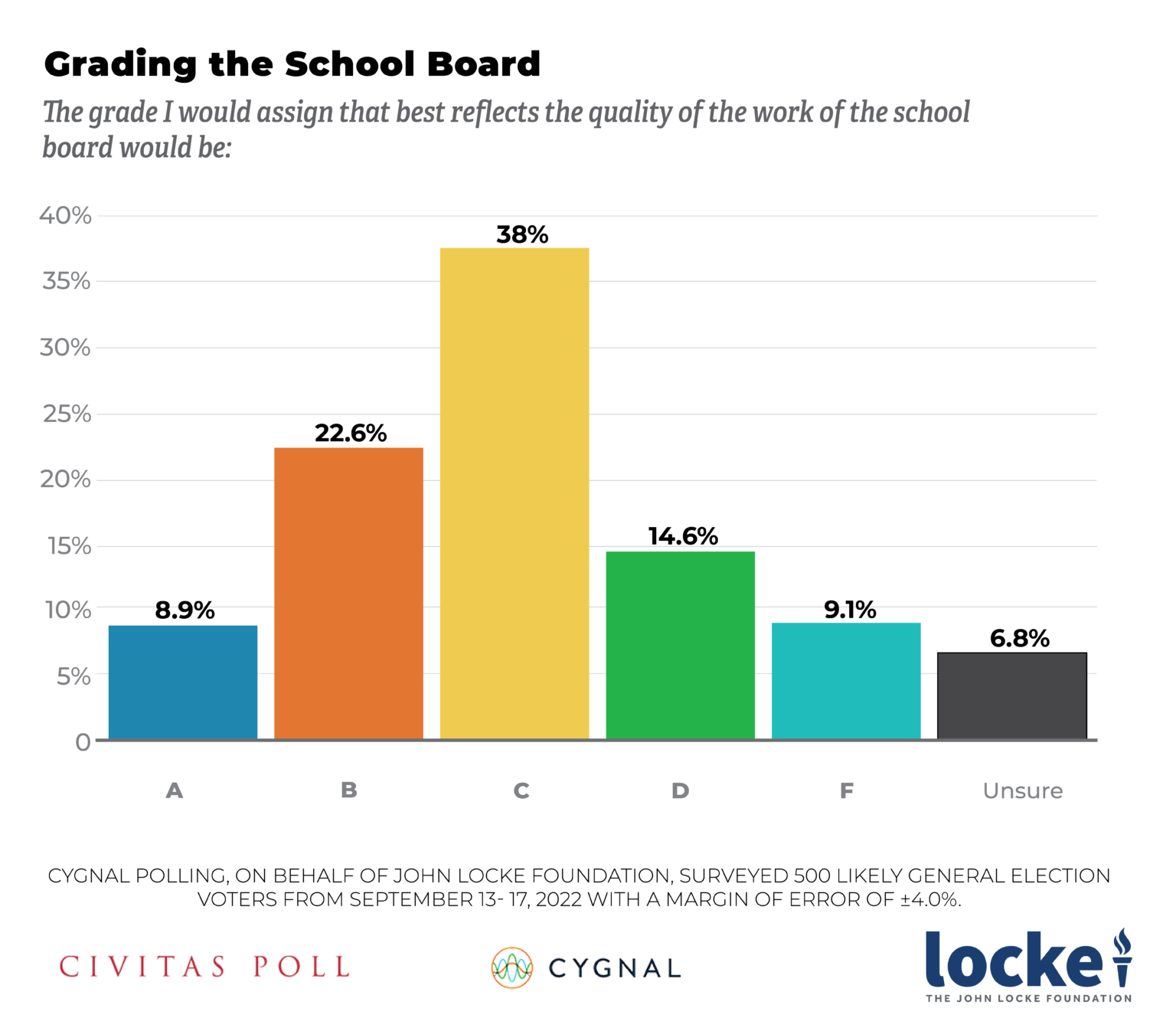 "C" was the most popular grade at 38 percent of respondents, followed by "B" (23 percent), D (15 percent), A (9 percent), and F (9 percent), with 7 percent unsure. This finding is not surprising, owing to the tendency of people to choose middle grades when asked to grade something.

Nevertheless, it is significant that school boards received grades of "C" from a large percentage of Republicans (38 percent), Democrats (35 percent), Independents (41 percent), and Moderates (42 percent). A "C" grade tells the recipient "not failing, but certainly needs improvement." That statement may best describe public education in North Carolina - and it may be one of the few things parents agree upon.

Parents in North Carolina go to the polls Tuesday, Nov. 8. They have experienced plenty of frustration over the last two years, not just from how schools and school boards handled the pandemic and post-pandemic education, but also over such issues as politicized classrooms and how schools and boards handle controversial topics and gender-identity issues. This frustration is evident in the Civitas poll numbers.

How will parental discontent impact their votes? We will find out soon.
Go Back