Third-quarter finance reports dropped Tuesday, November 2nd, and with them came insight into one of North Carolina's biggest questions for election day, will Republicans regain supermajorities in the state legislature?

According to AdImpact, a company that tracks national advertisement spending across the United States, campaign advertisement spending is on track to reach historic heights. Here in North Carolina, $314 million has gone into T.V., radio, and digital advertising. Nearly $133 million of that went into "downballot" races, including state legislative, judicial, and various local elections.

North Carolina Supreme court races have received $14 million in advertisements, making the state the second highest in the nation in Supreme Court election spending. Republican candidates hold a slight advantage in this regard. Richard Dietz and Trey Allen have received $8.8 million in advertisement spending compared to Democrats Lucy Inman and Sam Ervin at $6 million. This advantage for Republicans is, however, not reflected in candidate fundraising. Democrats have a heavy direct financing lead over Republicans.

Despite the fundraising disadvantage, both republican candidates hold the lead in the most recent Civitas poll.

In the House, Republicans must win in 14 of the 19 "toss-up" and "lean Democratic" districts in Table 1 to win a supermajority. Democrats must win 18 of them to get a simple majority. 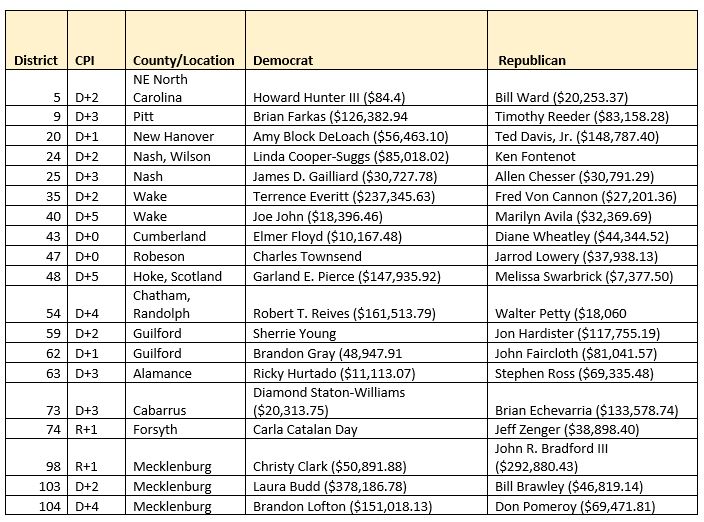 In the Senate, Republicans must win six of the nine seats in Table 2 to win a supermajority. Democrats must win all nine to gain a simple majority.

A complete listing of the critical elections' finances for both the House and Senate can be found here:

The latest Civitas poll has Republicans at a six-point advantage in the generic legislative ballot. This, alongside a lower turnout of registered Democrats during early voting compared to the last midterm election in 2018, bodes well for Republicans going into election day.
Go Back