For the first time in political polls in Austria, the populist nationalist anti-immigration Freedom Party has surged into the lead, with the Social Democrats Second and the traditional conservative Austrian Peoples Party third.  The liberal NEOS party, the Greens, and the Beer Party trailed far behind.  The Freedom Party by itself has about the same level of support of both of the governing coalition parties combined.  Two polls in a row, by different polling firms have shown the same result.

Since the last election, there has been a major realignment on the right with Peoples Party voters switching in large numbers to the Freedom Party.  That shift began when the odd couple government of the Peoples Party and the Greens ordered a draconian Covid lockdown and attempted to mandate Covid vaccination.  That also began a shift on the left of Green voters to the opposition Social Democrats.

The shift also reflects the loss of the Peoples Party's dynamic hard-right leader Chancellor Sebastian Kurz, who had been the world's youngest prime minister.  His Green Party "allies" controlling the Justice Ministry had trumped up phony allegations against Kurz to force him to step aside, and then Kurz got disgusted enough he quit politics altogether.  After becoming party leader, Kurz had taken the Peoples Party the farthest to the right it had ever been, and won the party's biggest election victory in many years, and he made further gains the following election.   Kurz' successor talks a lot like Kurz but does not follow through with action like Kurz did.  He was also the one who made the blunder of the draconian Covid policies, something Kurz was smart enough he would likely have avoided.

Immigration has become a big issue, and the current government is seen as not doing enough to stop it.  Citizens remember the last migrant surge, when Chancellor Kurz sent the Austrian army backed by armored vehicles to stop migrants from crossing the border.  Kurz first act as Chancellor had been to tell the EU that Austria would not obey the migrants quotas that the EU was then intent on imposing, scuttling that program.

Here are the poll results: 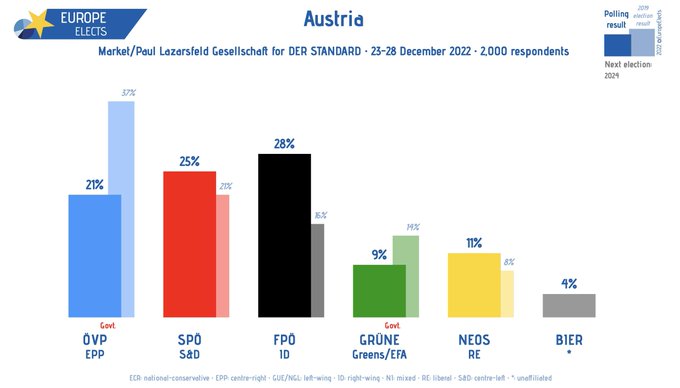 And here are the results of the earlier poll: