Why Raleigh Told Washington No | Eastern North Carolina Now | Now that the General Assembly has made it clear North Carolina will not set up state insurance exchanges or expand Medicaid under the terms of the Affordable Care Act, I'm going to remind Carolina Journal readers what they know about the complicated issues involved that readers and viewers of...

Why Raleigh Told Washington No

Published: Friday, February 15th, 2013 @ 3:08 pm
By: John Locke Foundation   ( More Entries )
Publisher's note: The article below appeared in John Hood's daily column in his publication, the Carolina Journal, which, because of Author / Publisher Hood, is inextricably linked to the John Locke Foundation.

RALEIGH     Now that the General Assembly has made it clear North Carolina will not set up state insurance exchanges or expand Medicaid under the terms of the Affordable Care Act, I'm going to remind Carolina Journal readers what they know about the complicated issues involved that readers and viewers of other media outlets likely don't know because of the embarrassingly poor news coverage the latter group has been provided.

To start with, the reason Gov. Pat McCrory and North Carolina lawmakers were faced with two difficult decisions about Obamacare is that it was a poorly conceived, sloppily written piece of legislation. Cobbled together from ill-fitting pieces in an attempt to please both the Center and Left of the Democratic Party, and to bribe certain members of Congress to vote for a measure their constituents did not favor, the bill contains contradictions, ambiguities, legal problems, and a huge transfer of policymaking authority from elected representatives (be they in Congress or state legislatures) to federal regulators.

John Hood
Regarding health exchanges, there is a key legal distinction between a state-run exchange and a federal exchange. According to the text of the Affordable Care Act, federal tax credits for the purchase of insurance plans are only available if individuals purchase those plans through state-run exchanges. The idea was to give states an incentive to set up their own exchanges, rather than default to a federal exchange.

Furthermore, all of the employer mandates to provide health insurance, and some of the individual mandates to purchase health insurance, are predicated on eligibility for those federal tax credits. As the U.S. Supreme Court later affirmed, Congress actually lacked the constitutional authority to compel Americans to purchase private health insurance. The reason Obamacare was upheld anyway is that Justice John Roberts deemed the taxes levied for noncompliance to be too low to constitute a real mandate. They are simply taxes - and in many cases they apply only when employees are eligible for federal tax credits.

If tax credits are disallowed under federal exchanges, such taxes are no longer applicable. Oklahoma and other states are currently suing the federal government to enforce these terms of the Affordable Care Act. The Obama administration has responded that regardless of what the law actually says, the intent was for everyone to be eligible for the credits and subject to the taxes. 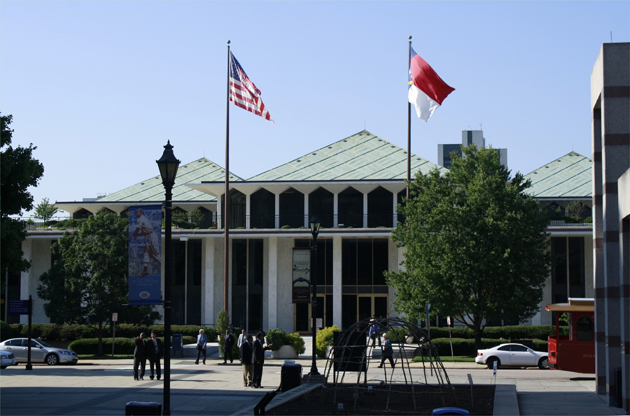 If the Oklahoma lawsuit succeeds, North Carolina's decision to default to a federal exchange will save employers and employees in our state a great deal of money. It will also likely lead to substantial revisions to the Affordable Care Act, which are necessary in any case to prevent the market for private health insurance from blowing up. If the lawsuit fails, North Carolina can revisit the idea of setting up a state exchange at that point, which may be prudent depending on the details of federal regulations to be issued in the meantime.

Now let's talk about how Medicaid expansion interacts with insurance exchanges. In states that expand Medicaid to households with up to 138 percent of poverty-line income (the threshold is actually 133 percent of poverty, but certain income is exempted from the calculation), the only way for people at or below that threshold to get subsidized health insurance is to enroll in Medicaid. They aren't eligible to enter the exchange and get private plans. Furthermore, it will make financial sense for people of low to moderate incomes who are currently insured through employer or individual plans to exit those plans and sign up for Medicaid. One way this will happen is that employers who hire mostly low-wage workers will end their plans, take whatever lumps may be required on their tax bills, and still come out way ahead.

The upshot is that many people who qualify for the expanded Medicaid coverage will either be previously insured (as has been true for past Medicaid expansions) or capable of being insured in the private system. Liberals who favor government-monopoly health insurance see this result as a feature, not a flaw, of Obamacare. Everyone else thinks replacing partially subsidized private plans (via current or future tax breaks) with a fully subsidized government plan is a horrible idea.

In states that don't expand Medicaid, eligibility for subsidized private insurance within the exchange is broader, stretching all the way down to the poverty line. So when North Carolinians were told that people from 100 percent of poverty to 138 percent of poverty would be out of luck if Medicaid weren't expanded, they were misinformed. Those who are really left out of the picture have incomes below the poverty line but don't qualify for Medicaid.

Republican and Democratic governors alike pointed out this screwy interaction between exchanges and Medicaid to the Obama administration and argued that they should be allowed a partial expansion of Medicaid, up to 100 percent of poverty for all residents, so that everyone else could enter the exchanges. They were turned down flat. Some Republican governors, such as Susanna Martinez of New Mexico and Brian Sandoval of Nevada, then decided to implement the full expansion despite their frustration with Washington and their misgivings about the long-term consequences. Others, including McCrory, have decided to decline the option for now, hoping that common sense may make an appearance in the nation's capital at some point in the next several years.

There are other reasons why implementing state exchanges and expanding Medicaid were bad ideas - including the basic fact that they are being funded by a combination of borrowed money and phantom Medicare cuts - but these two points alone are sufficient to explain the Republican decision in North Carolina.

The common denominator is that GOP leaders in our state know what many leaders of both parties are going to figure out soon: the Affordable Health Care is unworkable in its current form. Congress needs to try again to get health reform right. Even with divided government, there ought to be a path forward to something that makes more sense. The deal should look something like this:

• Create refundable tax credits for individuals to purchase private health plans, including within voluntary purchasing pools (exchanges). But don't require everyone to buy expensive, federally regulated plans that eliminate accurate risk-based pricing and discriminate against consumer-driven health plans in which patients use saved cash rather than insurance claims to pay for non-catastrophic medical bills.

• Set up subsidized high-risk pools for people with expensive preexisting medical conditions. They'll still pay something for their health care, as everyone should, but won't be either left outside the market altogether or completely subsidized by forcing young people with little disposable income to buy artificially expensive health plans or pay punitive taxes.

• Treat Medicaid as a safety-net program for poor and severely disabled people only, not as a vehicle for gradual adoption of a single-payer plan. Convert the program into block grants for states, so they can use competitive contracting and patient incentives to deliver necessary services more efficiently. In return, require states to make all people with poverty-level incomes eligible for Medicaid subsidy (although the subsidy might be used to enter the private market rather than restricted only to the government plan).

There are many other things that need to be done, both at the federal and state levels, to improve America's health care system. And Medicare reform is essential to balancing the federal budget in the long run. But this is the kind of deal that can and should be done in the near future.

State policymakers who favor such corrective action should say no to state-run exchanges and Medicaid expansion at this time. That's what North Carolina leaders are doing. If you are a Carolina Journal reader, you know why. It would be nice if other North Carolinians had been afforded the same opportunity to understand what was going on.
Go Back