Published: Sunday, January 29th, 2023 @ 9:00 am
By: The Correspondent   ( More Entries )
After the turn of the century
In the clear blue skies over Germany
Came a roar and a thunder men had never heard
Like the screamin' sound of a big war bird

Up in the sky, a man in a plane
Baron von Richthofen was his name
Eighty men tried, and eighty men died
Now they're buried together on the countryside

In the nick of time, a hero arose
A funny-looking dog with a big black nose
He flew into the sky to seek revenge
But the Baron shot him down ("Curses, foiled again!")

Now, Snoopy had sworn that he'd get that man
So he asked the Great Pumpkin for a new battle plan
He challenged the German to a real dogfight
While the Baron was laughing, he got him in his sight 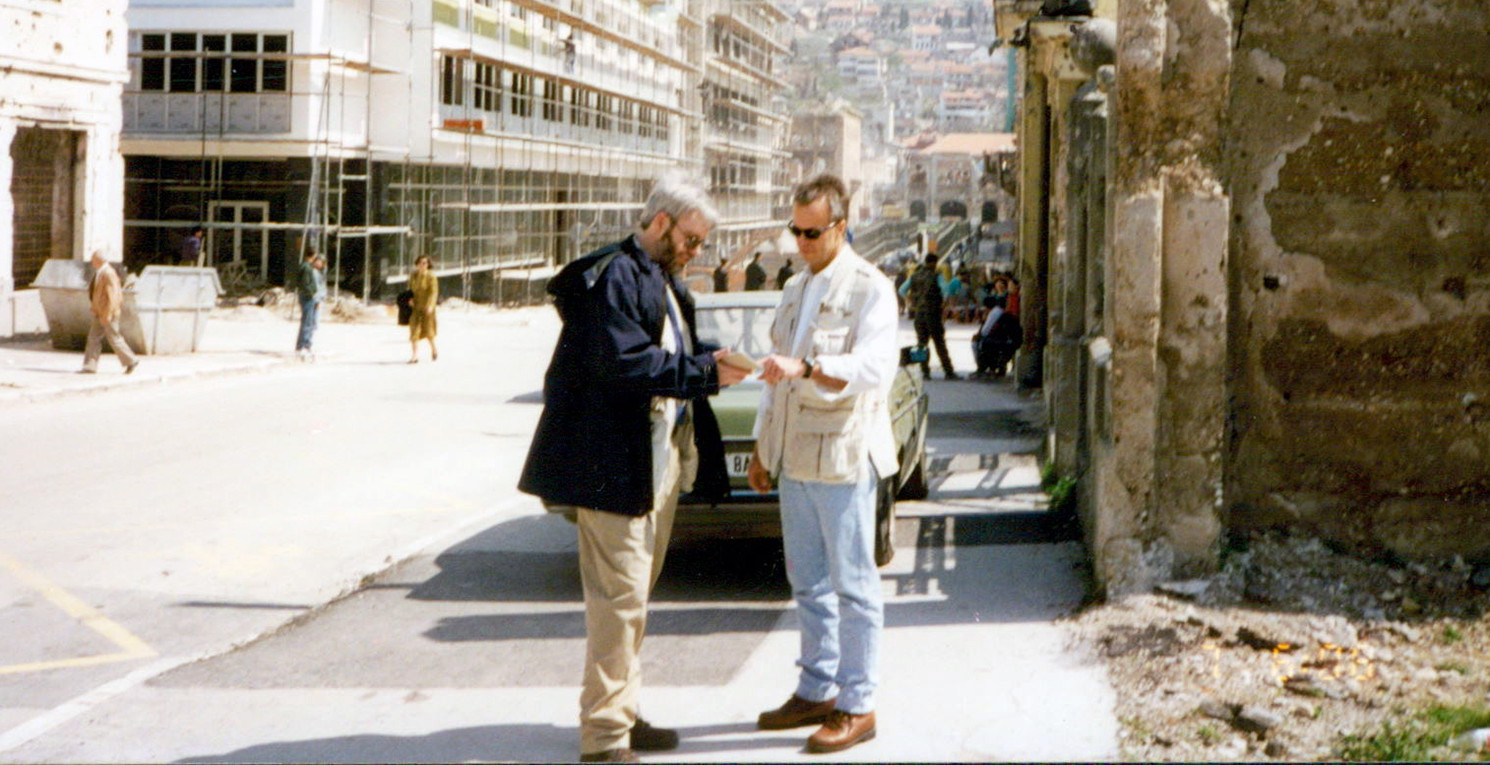 The Correspondent and the Hawk assess battle damage across Mostar, 1990-something: Above.     Click image to enlarge.

Berlin's decision to release Leopard II tanks signifies an escalation in the Third World War, as the shock optics of Panzers again rolling east across the steppe a harbinger of the Fourth Reich's fall. Meanwhile the top FBI agent responsible for investigating Russian collusion is arrested for colluding with Russia, in conjunction with Albanian intelligence elements.

Gee whiz Daddio, wonder if, as one of the top U.S. counter-intelligence agents investigating Trump, maybe some/all of his work was compromised? You know, like maybe he was taking Putin's gold while pretending to protect America -- and instead generated false intelligence about the one 20th century American president that had the economy rolling and inflation under control.

Nah. Joe Biden said all those classified documents he was hanging onto were nothing to see and that's just rain coming down our backs despite the strong ammonia smell. Joe knows smell.

Those Leopards, like the phantom European MiG jet fighters last spring, will never reach the front. They are top shelf, front-line Main Battle Tanks (MBT) most effective used en masse in the attack; the Ukies tactical doctrine, however, calls for them to be used as mobile direct-fire cannon in singles or pairs.

Manstein would not approve this message.

That is the same mistake the British high command made at Cambrai in 1917 and the French at first Meuse in 1940. The seminal purpose of armour is shock combat through paralyzing deep echelon strikes on critical command and communication nodes; such is a difficult mission within today's missile rich and drone friendly environment. The Russians, after reconstituting their air-defence umbrella, will demonstrate the correct usage of armour once their oft delayed 2023 offensive commences.

The Germans are caught in a very difficult position as without inexpensive Russian energy their industrial base cannot function and still stay solvent. Berlin's red herring gambit in linking their European partners' permission to send the Leopards to Kiev, only if combined with Washington's approval to release American Abrams MBT to the theater, failed miserably.

Fuel considerations aside (Turbo vs Diesel and resulting logistical challenges as this blend not available in Europe), the Pentagon would never allow these tanks to fall into Russian hands. Berlin knew all this but still launched their failed Hail Mary as they faced the starkest of choices: Continue alignment with the West and face the resulting economic suicide, or forge new economic partnerships with Moscow and turn back toward the East.

Meanwhile the Ukies continue suffering close to five hundred KIA each calendar day in Bakhmut; the Russian artillery fire is sustained and heavy as it obliterates a generation of Ukrainian youth. Zelensky, like Hitler before him, refuses to give up ground and thus Bakhmut becomes a 21st century Stalingrad redux. The slaughter sees regional morgues overflowing and refrigeration units overwhelmed with the stink of the dead.

Yet Joe Biden and his DC flunkies still send more American taxpayer monies to accelerate the slaughter and push Moscow toward the nuclear red line; Joe likes to read about those classified Russian nuclear strike packages while he sits in his garage doing the Nero and fiddling away. The ones he finds most interesting he can share with his FBI friends so they may deliver them to Moscow through Albanian intelligence agents.

Looks like Putin has been reading Joe's mail. Thankfully, the Russian attack from the north goes after what might be the last Super Bowl if those Leopards change their spots and roll east. Such would be a major escalation and the resulting Russian nuclear response would definitely ruin your whole weekend.

Finally, in terms of Joe Biden and the New World Order that seeks to enslave all mankind, we turn to that greatest of Americans, Mr Josey Wales for most nuanced insight. His words ring as true today as when he rode with Quantrill in defence of the women and children of Missouri:

"Don't piss down my back and tell me it's raining"


Super Bowl LVII goes in three weeks as we prepare to launch the epic multiple-unit Super Bowl safety play; the math is easy, the mass-psychosis event generated a bit more nuanced. From a math perspective the play is simple: There have been nine safeties in 56 Super Bowls or one every 6.22 games and the payoff is generally around +750.

Maffs are hard with public school education this century, but just realise if nine times 750 is more than 5700 you have what is known as an overlay. Overlays are mathematically sound moves and the primary reason why we spend the whole post-season building the bankroll to blow on this play. Yes, it is likely to lose and we get nothing for an entire campaign's work; but on occasion it hits and suddenly we are drowning in quam.

Hey Man, you gotta suffer for your art.

The local bar bookie unlikely to offer this opportunity for the big score. Those enlightened states with legalised internet or in-person wagering will have this one up, and it is still rare enough to enjoy competitive pricing. North Carolina residents once more denied this most basic global freedom and until this travesty against liberty remedied, one must wonder why?

Then again, one does on occasion see a foreign intelligence agent there on Jones Street. The cajun shrimp in the Member's dining hall is most exquisite during the week, and Moscow bag men gotta eat too.

That is the State Capitol's problem. Our challenge is to realise the safety is the only score that can be awarded by penalty (offensive holding or intentional grounding in the end zone) and that late in a game a team ahead by six, pinned deep, will often take an intentional safety to generate a free kick from the 20, then down four, following the field position realignment.

Sounds crazy but it happens. Even crazier is the theoretical rarest play in pro football; theoretical because it has never occurred -- the one point safety. The nuance of such beyond the current scope but suffice it to say a team can have a final score of one, but the winning team cannot. Unlike in Canadian football, an American game cannot end 1-0.

Should it ever occur, a one point safety will pay off just like a two pointer. Overall, the safety plus around 750 is a great play for the casual Super Bowl observer who wants to take a flyer and doesn't really care about the two teams or who wins. One thing is for sure, if you make this play at long odds you will watch the game much differently -- and you will learn to love the punt from midfield.

To get there, though, we need more winners. The Bills stumbled in the elements while the 49ers got 'er dun. We raised our playoff mark to 2-3 and down .8 unit, while still retaining a live two unit futures +575 ticket on the 49ers to win the Super Bowl.

We may collect on that futures ticket, we may not. However, at a bare minimum, it gives us a better value than taking the 49ers plus two and the hook laying the 11-10 (no juice on futures or money line tickets as it is calculated in the price) Sunday at Philly. We like the 49ers but our model does not require that move to most efficiently boost the bankroll.

We have Cincinnati's Joe Cool for that. Despite missing three offensive linemen out, Burrows tore apart the Bills and will be the most exciting QB in the Super Bowl since the original Joe Cool -- Broadway Joe Namath. Burrows makes all the plays and has all the heart. Red Baron Mahomes for the Chiefs makes all the plays too, but his high ankle sprain exposes all the Kansas City weakness; without von Mahomes at his peak, the Chiefs go from being a great team to merely a good one.

Early action has seen a strong Bengals motif as the opening price has been knocked down the hook to the current chalk. We have pondered how hard to hit this as we love the play; what we like even more is the gargantuan special teams edge the Bengals enjoy. Our call here is the BENGALS (+1) for four units and we should probably hit it twice as hard; but as they say, there are bold fighter pilots and old fighter pilots -- but there are no bold, old fighter pilots.

Whether it's having a zebra throw that end-zone safety-scoring hanky, fishing bodies out of the Tirana canal at daybreak, or collapsing Ukrainian espionage rings, you gotta believe in that fortuna redux like it is 19 BC again. Hard to believe what America has become as these Joe Biden dirty secrets finally being exposed by his own peeps. Easy to believe Joe Cool Burrows represents all that is good with America -- because whether over the clear blue skies of Germany, or a 24 degree Sunday evening in Kansas City, you can't go wrong with a Great Pumpkin believing underdog who ain't scared of nothing.
Go Back