A chance visit to a booth at an innovative health conference landed Brody School of Medicine student Dylan Suttle in a news video spot.

Suttle, who just finished his second year of medical school at East Carolina University, became the patient in a smartphone physical exam in April while attending the TEDMED conference, an annual gathering focusing on health and medicine held in Washington, D.C. 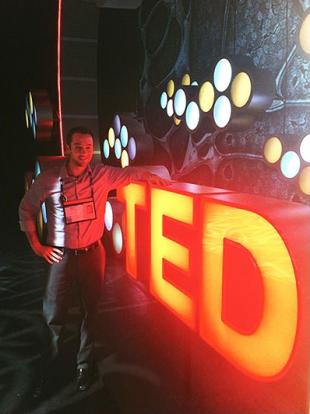 ECU student Dylan Suttle was featured in a news story about a new smartphone application while he was attending a TEDMED health conference on health care innovations. He is pictured above at the conference. (Contributed photos)
The conference fosters interaction among medicine's different disciplines by breaking down silos and gathering people from various concentrations, creating a massive exchange of ideas and connections, Suttle said.

"It's been very difficult for me to explain my experience at TEDMED because it was so unique," Suttle said. "Never have I been in an atmosphere where each individual is so passionately dedicated to improving health care yet from such a variety of backgrounds."

Suttle's trip was made possible by the ECU Medical & Health Sciences Foundation and a scholarship from Kaiser Permanente. He was one of 1,800 delegates, and one of only 200 to receive the scholarship, from around the world.

He also is the first student from the Brody School of Medicine to attend the conference, said Dr. Elizabeth Baxley, senior associate dean of academic affairs.

"Dylan's enthusiasm about the opportunity to learn from some of the brightest minds, and to engage with a diverse group of speakers and participants, was something we wanted to support from the beginning," Baxley said.

"As a student leader, we knew that Dylan would bring back some cutting edge ideas to ECU and would push us to consider the ways we do things from a much broader perspective. Taking advantages of opportunities outside of the classroom always expands the minds of our students - and we are wise to listen to what they teach us."

At a tent called the Hive, a common area featuring gourmet espresso and health food, 50 health start-up companies pitched their products to delegates.

One feature start up, the Smartphone Physical, took the vitals of participants like Suttle. An Associated Press news crew came by to interview the creators while Suttle was there, landing him a cameo in the feature story: http://www.usatoday.com/story/news/nation/2013/05/02/physical-smartphone-possibility/2129757/ .

Several devices are being developed for patients to track their vital signs like heart rate or blood pressure at home which can be wirelessly relayed to a physician through the internet for real-time observation. 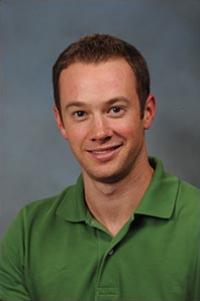 Dylan Suttle
"It's fascinating to think of the endless possibilities of how technology will shape my career as a physician," Suttle said.

Suttle, who is an avid user of apps, said he is excited about the possibility of patients taking a more active role in managing their health in partnership with their physician through new technologies.

"I see this as the perfect answer for solving the problem, particularly in eastern North Carolina, of the lack of access to health care," Suttle said. "Forget making the patient find a way to travel to your clinic. Instead give them the tools they need to manage their care and use technology to reach out to them."

Each TEDMED delegate received a digital pedometer and health tracking device called Fitbit. Participants were challenged to walk the equivalent of circling the globe while they were in D.C.

While falling short of the goal, Suttle has continued using the device. "Having access to these numbers has transformed how I think about the need to stay active," he said. "I believe this would be true if patients received similar tracking technology of their own health."

Suttle said he would challenge Greenville's leaders to pave more sidewalks, ramp up health education in schools and enforce healthier food options in restaurants to make it a model healthy city in North Carolina.

"I believe we play at integral part as a medical school in helping to make this happen, but it will certainly take the whole community buying in and working together to yield such results," Suttle said.

Suttle, a Monroe native who earned his undergraduate degree at the University of North Carolina at Chapel Hill, worked as a radiologic technologist in interventional radiology before entering medical school.