Silver Linings Playbook | Eastern North Carolina Now | They say love can make you a little crazy. And the movie begins by showing how 2 people are living proof of that.

Login to Send a Private Message to Diane Rufino
Publisher's note: When you finish this Diane Rufino review, please spend a few moments using our Movie Database, and feel welcome to return. Nearly everything important to movies, plus great images are there.

Love is Many Things, Although ...

They say love can make you a little crazy. And the movie begins by showing how 2 people are living proof of that. Pat (Bradley Cooper) loves his wife, Nikki. But after he came home unexpectedly and 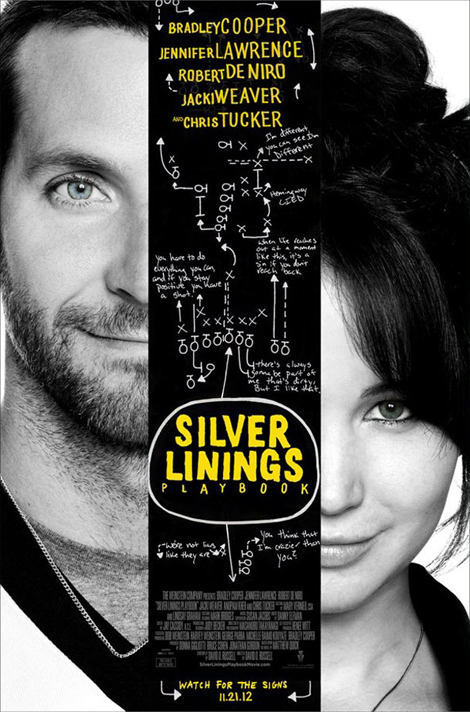 caught her in the shower with another man, he nearly killed him. As part of a plea bargain, he agreed to spend 8 months in a psychiatric ward and take medication for his bipolar disorder. During that time, he became determined to win his wife back through hard work and selfless acts.

Tiffany (Jennifer Lawrence, Academy-award winner) loved her husband. And after he died in a tragic car accident she felt responsible for him being out driving at the time and she sank into a deep funk - interrupted only by frequent, meaningless sex.

The title of the movie is "Silver Linings Playbook" and that's because Pat is determined to find the silver lining in his series of misfortunes. In fact, he adopts a personal motto - "Excelsior," a Latin word meaning "forever upward" - to guide him in his quest to win Nikki back and restore their marriage. For example, he believes he lost the affections of his wife because he was fat and inattentive and maybe even intellectually lazy. To win her back, was determined to better himself - running relentlessly, reading the books Nikki reads, and practicing being more attentive. He begins to ask himself: "What would Nikki want me to do?" 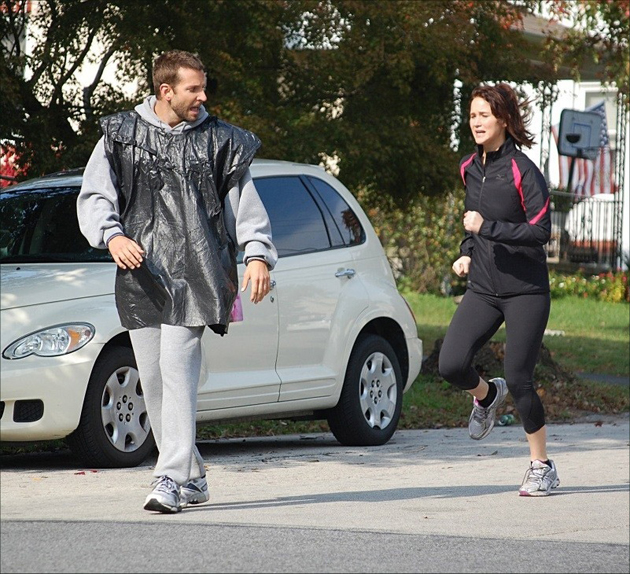 That whole crazy running thing for introspective acceptance, fun and some much needed exercise: Above and below.    Click the picture to expand to as much as 1000 pixels wide within most expanded images, and then push the arrows embedded in the center edge of the play-box to access the gallery, and slide new images into viewing within the center of the screen. 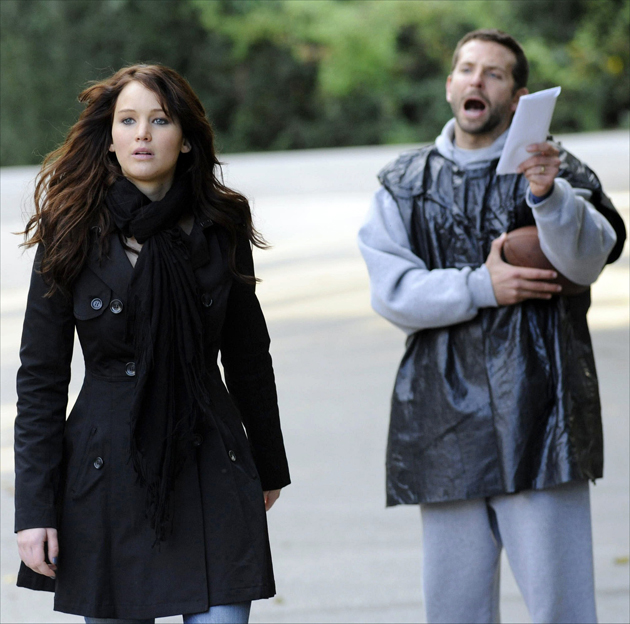 While at first his dedication to Excelsior and his desire to win Nikki back border on creepy, you can't help but find nobility in his drive to improve himself and to prove himself the man his wife would like him to be. But then you find yourself asking: "Was he crazy because of a chemical imbalance or crazy because he was with the wrong woman?"

When Pat meets Tiffany, there is an obvious attraction between two deeply flawed human beings but also some hostility. Each thinks the other is "crazier" and passes judgment. Pat calls Tiffany a slut and Tiffany accuses Pat of being a hypocrite for criticizing others while not acknowledging his own shortcomings. Underneath the tension, you sense a deep friendship will develop. Initially they are drawn to one another for the mutual benefit they can provide each other: Tiffany can sneak letters to Nikki from Pat (around the court's restraining order) and Pat can be the dance partner that Tiffany needs in order to enter a coveted dance competition that she's been dying to compete in. But in each other, their one-time faults are no longer that. They are comfortable with one another and no longer judge each other. He realizes she is a "beautiful bird with a hurt wing who just needs time to heal" and she realizes that Pat is uptight and quirky because of the tight constraints and high expectations that Nikki placed on him during their years together. She tells him: "You know what your problem is? You're afraid to live." 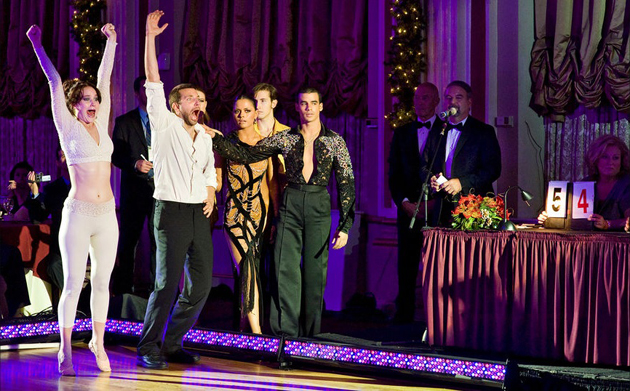 Dancing fools: Above.     It was an explosive relationship: Below. 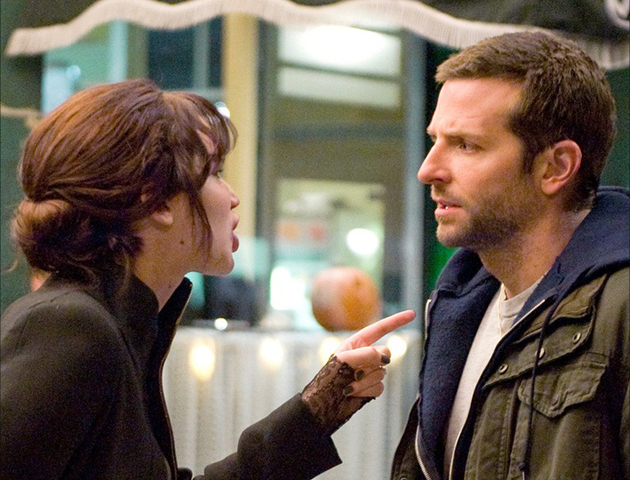 Silver Linings Playbook is true to its title. Pat and Tiffany both find the silver linings in their situations. Sure they were hurt and were hurting but those same unfortunate situations taught them valuable lessons about their humanity and helped them find the good in themselves. In Pat and Tiffany, we're see two hurting people who need each other and grow to love each other. Through their awkward, often sweet romance, we see them heal and grow. Their relationship forms a strange catalyst that helps smooth over old family wounds and conflicts. After the dance competition, Pat sees Nikki in the audience and walks over to her, clearly thrusting a dagger into Tiffany's heart. He has a short conversation with her (he whispers in her ear so you don't know what he says to her) but then looks for Tiffany to celebrate their accomplishment - their dance scores. At that time, he gives her the last letter he will write. With that said, and without giving the ending away, let's just say that by the end of the movie, everyone is happier, healthier, and optimistic about their shared futures. 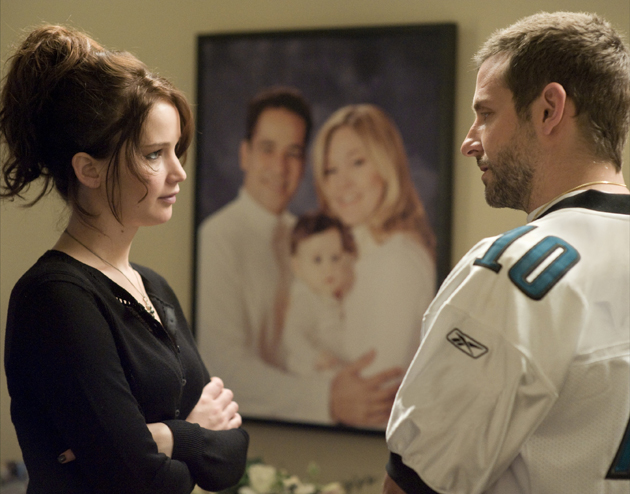 Bradley Cooper is a most versatile actor: Above and below.    Click the picture to expand to as much as 1000 pixels wide within most expanded images, and then push the arrows embedded in the center edge of the play-box to access the gallery, and slide new images into viewing within the center of the screen. 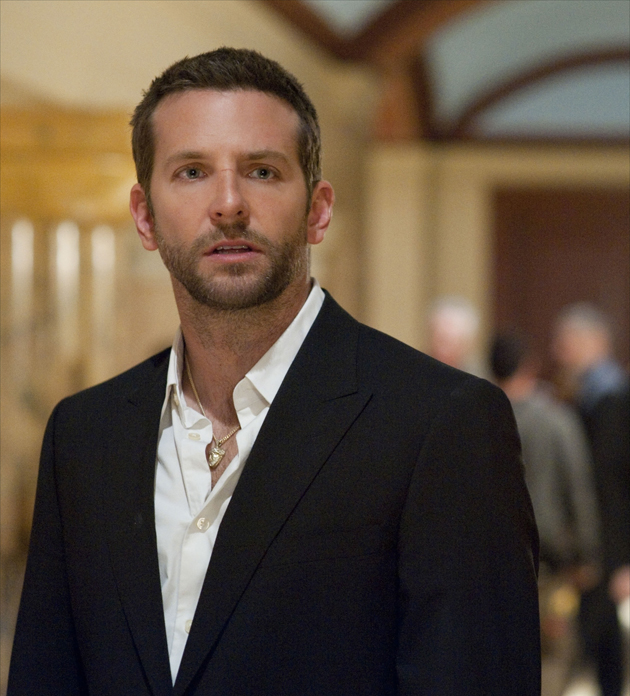