Return of the Light | Beaufort County Now | The Roanoke Marshes Lighthouse resides in a new home along the waterfront in Manteo.

Return of the Light

Published: Tuesday, November 3rd, 2009 @ 2:19 am
By: Bryan Oesterreich   ( More Entries )
First built in the Croatan Sound in 1857 and disassembled a century later, the screwpile Roanoke Marshes Lighthouse shines again in Manteo as an architecturally identical replica.

“Nothing indicates the liberality, prosperity, or intelligence of a nation more clearly than the facilities which it affords for the safe approach of the mariner to its shores.” — Report of the Light-house Board, 1868

After years of planning, permits, and funding, the story of the Roanoke Marshes Lighthouse is being retold, as the replica of the original structure, built in 1857 and first lit on April 15, 1858, stands proudly along the Manteo waterfront. The newly opened lighthouse guides not only mariners to safe harbor in Shallowbag Bay, it guides tourists,students, and scholars with its beacon.

When someone says “lighthouse,” many people envision the traditional coastal structures built on land, with a large base tapering upward, like the Cape Hatteras Lighthouse. There are approximately 600 traditional land-based lighthouses in the United States. The Roanoke Marshes Lighthouse, however, belongs to a much different genre — screwpile lighthouses.

A posting from the Light-house [sic] Board, dated March 15, 1858, includes the following: The lighthouse will be set in four feet of water in a channel connecting the Pamlico and Croatan sounds; the structure will be erected on iron piles; the focal plane of the light is 34 feet above water level; the light should be visible at a distance of 10 nautical miles. And it was. 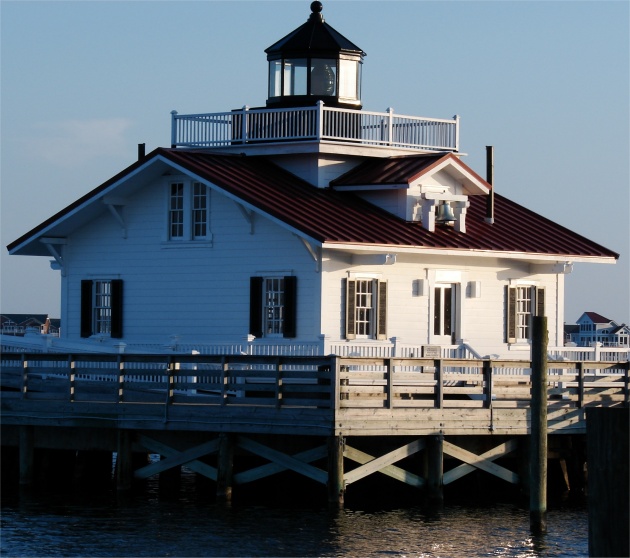 The Roanoke Marshes Lighthouse rests at its new home along the Manteo waterfront. The keeper's quarters was built around this screwpile lighthouse.

The Roanoke Marshes Lighthouse served pleasure and commercial vessels for 98 years before being decommissioned in 1955. It was disassembled and loaded on a barge to be shipped to Edenton. It never reached its destination. The lighthouse that had stood fast guiding mariners for 98 years ended up on the bottom of the sound when the barge transporting the lighthouse capsized. The lighthouse may have been sent to Davey Jones’ locker, but its spirit — and light — shine on.

At the beginning of the 20th century, screwpiles in this state outnumbered traditional beacons by two to one (15 were built). While traditional land-based lighthouses were designed to guide offshore vessels, screwpile lighthouses were built over water and were designed to allow safe navigation of shipping channels in the sounds of the Carolinas, Virginia, Delaware, and along the Gulf of Mexico. During the 1800s, as many as 100 were put in service.

“Screwpile” refers to the method by which the lighthouses were anchored in the sandy bottoms of the sounds. A broad-bladed screw at the end of each piling allowed it to be literally screwed into the sand beneath the water. This design enabled the lighthouse to be placed safely in shallow water areas that frequently faced strong winds and tides — the same winds and tides that made navigation treacherous for the ships that provided necessary goods for remote coastal communities.

“The spider-looking structures usually contained living quarters for keepers. David Farrow, a Manteo town commissioner for the past six years, speaks with authority on life aboard the Roanoke Marshes Lighthouse — he was stationed there in the mid-1950s as a Bosons Mate First Class. “At that time, there were two of us stationed on the light. We had to share all the duties — including cooking,” he says. Supplies were brought to the lighthouse by a small motor launch that was held aloft under the structure until needed. Keepers faced all manner of foul weather, but Farrow says the only time weather conditions bothered them was during what he refers to as “lighthouse devotion.” A small, unheated, shed-like structure was attached to the main house and acted as the lighthouse bathroom. “In February, when the temperature was in the 30s and the wind was blowing — let’s just say no one read any magazines out there,” Farrow says, grinning.

Many Down East cities and towns have turned to their waterfronts to revitalize their communities — Washington, Plymouth, Columbia, Hertford, Windsor, and Manteo have all seen the results of preserving their rich maritime histories. Last year, for example, the town of Plymouth constructed a screwpile lighthouse replica, similar to the Roanoke Lighthouse. The attraction, built on the banks of the Roanoke River, was modeled after one that guided mariners up the river from the Albemarle Sound since 1866. The replica has added another dimension to Plymouth’s growing waterfront renovations. When town officials in Manteo decided to move forward with their lighthouse replica project, they learned all about government red tape. “We had quite a time getting all the necessary permits and approval from government agencies,” says Manteo town manager Kermit Skinner. “Our idea was to locate the lighthouse at our waterfront, so visitors could enjoy it.” The lighthouse now rests on pilings originally used for a water treatment plant that had been put out of service. The Army Corps of Engineers had to be convinced the lighthouse posed no danger to “safe navigation.” That task, which took several years, was challenging, according to Skinner, but the town was up for it. “We were determined to make this happen.”

The lighthouse, which opened earlier this year, is architecturally identical to the original — except for the enlarged deck that surrounds the house. The original structure measured approximately 26-by-26 feet on the first floor and included a coat room, store room, living room, kitchen, and a spiral staircase that led to two second floor bedrooms, a watch room, and the light itself.

Visitors, which will include students and instructors of all academic levels, can learn about the role played by the lighthouse when it was operational. Commercial fishing and merchant vessels found navigation in the sounds difficult at best. One trip across the sound at night will confirm this. A ship could easily ground on the ever-shifting bottoms. Lighthouses provided reliable points of reference long before the Loran and GPS systems in use today. 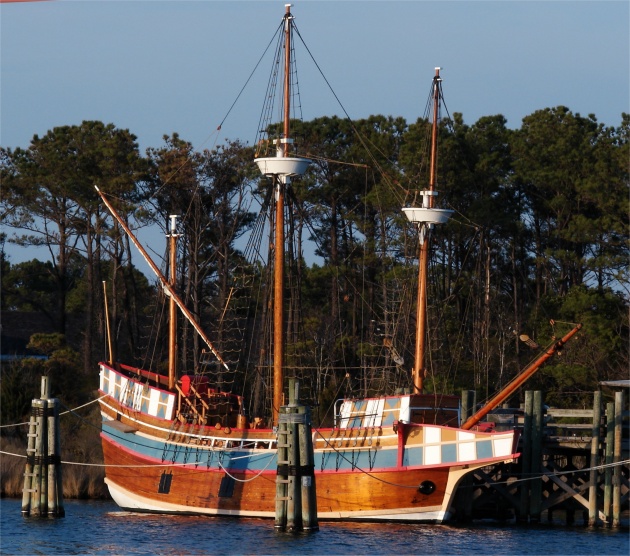 The Queen Elizabeth replica has a permanent across from the Lighthouse and the and the Town of Manteo.

And visitors have a majestic view of the Manteo harbor and waterfront while aboard the lighthouse. Visible from the lighthouse is the Elizabeth II sailing ship (a representation of a 16th-century English merchant ship), Roanoke Island Festival Park (which includes a film theater and the Adventure Museum), the George Washington Creef Boathouse (the North Carolina Maritime Museum on Roanoke Island, which holds a wealth of the island’s boat-building history), the Gazebo (a favorite spot for fishing), marina, specialty shops along the waterfront, and, of course, Shallowbag Bay.

The town of Manteo has additional long-range plans for the lighthouse, according to Skinner. “We’re hoping to develop a water taxi service,” he says. “People visiting the beaches of the Outer Banks who don’t have access to a boat would then be able to come to Manteo in a very fitting and popular manner — on the water.” 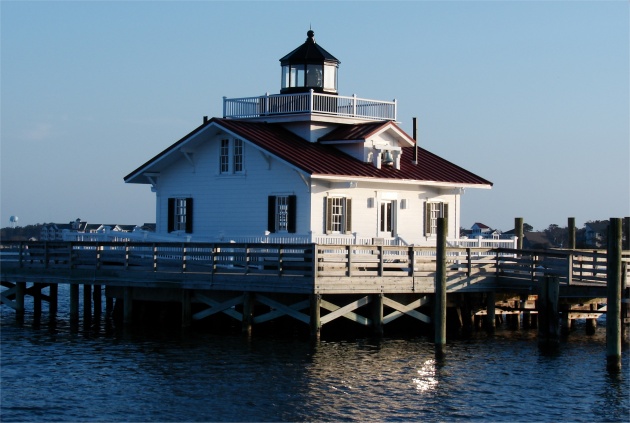 The Manteo Lighthous now rests at the end of a sturdy dock along the downtown Manteo waterfront.

Vacationers driving through Manteo on their way to the beaches of the Outer Banks will be pleasantly surprised if they schedule time for a visit to the waterfront — just several blocks off the U.S. Highway 64/264 corridor. “People come up to me and tell me how glad they are that we’ve made sure our rich maritime history will never be forgotten,” says Skinner.

When Bryan Oesterreich is not writing for this and other regional publications, he teaches English at Beaufort County Community College.
Go Back