Belk Loses Law License for Three Years | Beaufort County Now | A three-member panel of the state's Disciplinary Hearing Commission decided at an Oct. 21 hearing to suspend former Mecklenburg County Judge Bill Belk's law license for three years for violating a rule of conduct. Belk, who insists the violation is nothing more than a misunderstanding he...

Published: Sunday, October 27th, 2013 @ 2:04 am
By: John Locke Foundation   ( More Entries )
Publisher's note: The author of this post is Don Carrington, who is executive editor for the Carolina Journal, John Hood Publisher.

Former Meck County judge penalized for what he calls 'misunderstanding' 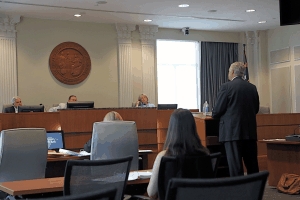 Former judge Bill Belk testifies Oct. 21 to (from left) Fayetteville attorney Renny Deese, New Bern attorney Joshua Willey Jr., and former legislator Karen Ray.(CJ Photo by Don Carrington)
RALEIGH  -  A three-member panel of the state's Disciplinary Hearing Commission decided at an Oct. 21 hearing to suspend former Mecklenburg County Judge Bill Belk's law license for three years for violating a rule of conduct. Belk, who insists the violation is nothing more than a misunderstanding he "tried to correct and that had no bearing on my role as a judge," could have been disbarred for life.

The panel also said that Belk could apply for a conditional reinstatement of his license after one year. He was ordered to cover the cost of the hearings in his case and administrative fees. Those costs were not available at press time.

After the hearing, Belk told Carolina Journal that he was disappointed with the punishment. Even though he does not practice law at this time, he said he will seek to have his license restored.

On Aug. 23 the same panel ruled Belk, 64, violated the Rules of Professional Conduct for attorneys because he was untruthful when interviewed four years ago about his outside activities while he was a District Court judge in Mecklenburg County.

It was the third time in four years that Belk has received discipline from a state agency monitoring members of the legal profession, even though none of the complaints involve actions he took as a judge or an attorney. (See related story here.)

Belk's troubles stemmed from a complaint by the North Carolina State Bar, the state agency that regulates attorneys. At the hearing, Belk and State Bar attorney Margaret Cloutier called witnesses who inform the panel of the factors it should consider before issuing any formal punishment. Cloutier called two attorneys who said it was important to maintain integrity within the legal profession. Belk's witnesses testified that he was an honest man, has done a lot for his community, and played a key role in several charitable causes and organizations.

In 2010, Belk received a lifetime ban from serving as a judge by the N.C. Supreme Court as a result of a complaint by the Judicial Standards Commission, the state agency that considers allegations of misconduct against judges.

The issue central to the bar complaint (and his lifetime ban from the judiciary) is his continued service on the board of directors of Sonic Automotive Inc., while he was a judge. The bar complaint alleged that Belk was being untruthful and misleading when he answered questions about health insurance coverage during a February 2009 interview with a Judicial Standards Commission investigator.

Belk told CJ he has been singled out unfairly and that the disciplinary systems for judges and lawyers in North Carolina need to be reformed. He blames his troubles on a broken system and specifically on Paul Ross, executive director of the state's Judicial Standards Commission, who initiated the initial complaint against Belk in 2009.

In August 2012, the state bar's Grievance Committee issued a reprimand to Belk based on an August 2010 judgment resulting from a civil action filed by his former wife. A Superior Court judge ruled that Belk had mismanaged some of the funds in a custodial account that he set up for their daughter.

Sonic is one of the nation's largest auto retailers, and Belk had been on the board since 1998. The N.C. Code of Judicial Conduct contains a provision that states a judge "should not serve as an officer, director, or manager of any business." Belk maintains that the provision does not prevent judges from having such corporate ties; otherwise, the language would be "shall," rather than "should." He also noted that South Carolina allows judges to serve on boards so long as that participation does not conflict with the judge's judicial duties or create the appearance of a conflict.

The state bar complaint alleges that in December 2008, Belk told Ross that Sonic was a source of Belk's health insurance and he wanted to remain on the Sonic board because he had medical issues. The complaint also alleges he told the same information to a commission investigator during an interview in February 2009.

Belk told CJ he did not lie to Ross or the investigator. In responses to commission and bar complaints, he said he wanted to remain on the board because he would be likely to get health insurance from Sonic if he served no more than one four-year term on the court. "While [I was] a judge I was receiving health insurance from the state and they should have known that," he said.

The Charlotte Observer reported that Sonic, founded by NASCAR promoter Bruton Smith, did not offer medical insurance to board members, but Belk told CJ he believed there was a possibility he could pursue health insurance through Sonic if he had no other health coverage. He had made a similar arrangement when he served on the board of directors of Monroe Hardware. Besides, Belk said, the state bar was more interested in forcing him to resign from the Sonic board rather than settling any uncertainty over what he had said about any medical benefits associated with Sonic.

In 1973, the General Assembly established the Judicial Standards Commission as the state agency to consider complaints of misconduct against judges. After an investigation, the commission may recommend to the N.C. Supreme Court that a judge should be disciplined. The Supreme Court then reviews the case and dismisses it or establishes disciplinary action ranging from a public reprimand to removal from office.

The commission is made up of 13 members, five of them judges appointed by the chief justice of the Supreme Court. The commission's chairman must be a member of the N.C. Court of Appeals. The State Bar Council appoints four attorneys, and the governor and general assembly appoint four citizen members.
Go Back