Friday Interview: Coolidge Shrank Government While Economy Grew | Eastern North Carolina Now | As Americans continue to struggle with a sluggish economy, policymakers could learn useful lessons from a president who served in office more than 80 years ago. That's the view of Amity Shlaes, director of the Four Percent Growth Project at the George W. Bush Center, nationally syndicated... 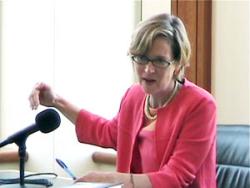 Amity Shlaes
RALEIGH  -  As Americans continue to struggle with a sluggish economy, policymakers could learn useful lessons from a president who served in office more than 80 years ago. That's the view of Amity Shlaes, director of the Four Percent Growth Project at the George W. Bush Center, nationally syndicated columnist, and author of three New York Times best-sellers, including a biography of the 30th American president, Calvin Coolidge. Shlaes outlined Coolidge's successful record for a recent John Locke Foundation Headliner event. She also discussed Coolidge during an interview with Mitch Kokai for Carolina Journal Radio. (Click here to find a station near you or to learn about the weekly CJ Radio podcast.)

Kokai: Calvin Coolidge. Why devote an entire book to this president who a lot of people don't even remember?

Shlaes: Well, today we wonder  -  we're a little worried about the debt today, right? And today we wonder if a president could ever cut debt really, could cut the budget really  -  especially in peacetime. That seems incompatible with our politicians. It's almost inconceivable.

And here was a U.S. president who cut the budget during peacetime and prosperity. The astounding fact, Mitch, about Coolidge was he came into office in 1923. He left in March '29, and when he left the White House, the federal budget was lower than when he came in. Actually lower, not just mess[ing] around with inflation  -  really, truly lower. Even as the economy expanded throughout the period, even as the population expanded, he managed to shrink the government. So how did he do that? That's the subject of this book.

Kokai: I imagine some people will hear that and say, "Oh, but those were different times. It was so long ago. It must have been easy to cut the federal government back then." Your book details that even in the 1920s, it was hard to make these cuts. These weren't simple, easy decisions.

Shlaes: Well, yes. We always ask, "What direction is the country going in?" And if you ask President Obama what direction he was going in, it wouldn't be that much different, on paper, than where a Republican might be going. In that period, they had the Progressive Party. It wasn't shy about expansion of government. It wanted to nationalize the two most important industries at that time: the railroad and electric power. It wanted to nationalize the industries of the future. The Internet equivalent was utilities. It didn't mind the idea of a bunch of reforms at the federal level, some of which we wouldn't agree with, such as full national health like England. And this was the coming party. If you [asked], "What is the future of the U.S.?" you'd say, "It was the Progressive Party."

And, indeed, in 1924, in the election in which Coolidge, as president, did compete, the Progressives got 17 percent. So they were saying the Republican Party is dying, the Progressives are going to take over, and America is going to shift left.

So imagine as executive you're competing with that. And instead of saying, "Yeah, I'll do a little national health. Yeah, I'll do a little for the veterans." (The great entitlement group at that time was the veterans, the ones seeking entitlements. One-third were disabled from World War I. They were angry, and they had no pension.) Instead of saying, "Yeah, I'll concede there," Coolidge just said, "No." So to sketch it as a job without challenges or without pressure from the left is to misrepresent history.

Kokai: The Progressives were a separate party eventually, but there were a lot of Progressives within the Republican Party, and Calvin Coolidge, we learn from your book, really had to come to grips with what he thought about that element of his own party and whether he would stand with Progressive Republicans or with another group that was more for limited government. How did he end up coming to the stance that he did?

Shlaes: One of the interesting things about the period is the Republican Party thinks it's in crisis today; it was really in crisis then. There were many new immigrants. They weren't necessarily going to vote for Republicans. They were in traditional Republican territory. The Progressive movement was growing.

Coolidge was a professional politician. He spent his entire career in politics in a very interesting way, moving up the ladder from little mayor of Northampton or even the city solicitor, all the way to governor of Massachusetts and then to Washington, vice president, president. He had to figure out where he fit in this. And as a young man, a young Republican coming out of college in 1895, who is the star of his party in the first 10 years of his adulthood? Theodore Roosevelt, the great Progressive.

And there's an amusing section in the book. Coolidge's honeymoon, he goes to Canada. And even in the Canadian papers, Theodore Roosevelt is it. Coolidge as a young man believed in Progressivism and passed Progressive laws, endorsed them, sponsored them as a lawmaker in the state of Massachusetts and Boston. He even had an antitrust law he wanted for theaters. So these Progressive concepts  -  help for workers, minimum wage, things like that  -  Coolidge, if you go look at the roster of the things he endorsed as a state politician, it's there. He was a Progressive.

And Coolidge saw the hypocrisy in this. There was a lack of functionality. And he began to say, "Well, maybe I'm not so progressive." And he was horrified at the disloyalty of Theodore Roosevelt, who ran off and founded his own party, the Bull Moose Party, and therefore gave the opposition power. Woodrow Wilson wouldn't have won if the Republicans hadn't split.

So a third factor, though, is federalism. Coolidge believed in states. He was a state Progressive. But the idea that Washington, which he called the national government, should promulgate Progressive policy, well, he wasn't so sure about that. So it's both a shift in temperament  -  through experience and philosophy, as a man ages and comes to maturity  -  and also a shift in level of government.

If Coolidge had always stayed Massachusetts' governor, we could do a hypothetical and say he might have been for some Progressive laws for Massachusetts, even as an old man. But he didn't. He went to Washington, to where he thought neither Progressive laws were a good idea nor, certainly, was it suitable for Washington to be promulgating them, to them come upon the states from Washington.

Kokai: What should today's politicians learn from Calvin Coolidge?

Shlaes: We think today that if a candidate is for cutting government, he's going to lose. We also think, by the way, that cutting government doesn't work. "Austerity," the dreaded red letter A, right? No politician can be for it, whatever party. What Coolidge showed is that you could be for austerity and have a good result with the economy. They had 4 percent growth, like the name of my project at the Bush Center. Something to which we today can only aspire: 4 percent growth. They had very low unemployment with a policy of austerity.

And the second thing is that austerity can win. People wondered whether Coolidge, when he did run for president in 1924  -  he had come [into office in 1923] after the death of a president  -  would he win? Would he make it? And the outstanding fact of the '24 election is that Coolidge, as a Republican, even with a third party taking 17 percent, prevailed. He had an absolute majority, not just a plurality, beating Democrats and Progressives combined. He was enormously popular. When he didn't run in '28 the Republican Party, neurotic [then] as now, had a nervous breakdown. So you can win politically and economically with a policy of government austerity. That's Coolidge's message.
Go Back