Published: Thursday, December 12th, 2013 @ 3:45 am
By: John Locke Foundation   ( More Entries )
Publisher's Note: These posts, by Dr. Terry Stoops, and aptly titled CommonTerry, appears courtesy of our friends at the John Locke Foundation. A full account of Dr. Stoops's posts, or mentioned as a credible source, are listed here in BCN.

Which school districts get the most bang for the buck?

It has been nearly three years since the left-leaning Center for American Progress published a superb report, Return on Educational Investment: A District-by-District Evaluation of U.S. Educational Productivity. In the report, CAP Senior Fellow Ulrich Boser made the case that decades of significant funding increases for our public schools failed to produce lasting innovation or progress. Consequently, public school systems needed to cease thinking of inputs and outcomes separately and embrace the concept that unifies them, educational productivity.

Unfortunately, Americans have been conditioned to equate the quality of education with the condition of various inputs -- per student spending, educational technology, teacher pay, class size, school buildings, and the like. Presumably, schools will succeed so long as governments furnish high tech gadgets, pay teachers a lot, have small class sizes, and construct magnificent school buildings. But no matter how many times researchers find weak empirical relationships between spending and performance, the public will insist that schools are one teacher pay raise away from educational glory.

In the spirit (and lacking the sophistication) of Boser's report, I examined NC DPI expenditure and student performance data for each of North Carolina's 115 school districts. For the purpose of this newsletter, I examined districts according to their "performance composite," the overall pass rate for tests administered in each district last year.

Union County Schools, Mooresville Graded Schools, and Wake County Schools performed very well despite spending less per student than the state average. Arguably, these were the three most productive school districts in the state. To put is another way, Union, Mooresville, and Wake "got the most bang for the buck."

Davidson County Schools, North Carolina's lowest spending district ($7,374 per student), had a respectable showing. Only 27 districts had a higher performance composite than Davidson. The state's highest roller, Hyde County, spent $17,557 per student but had a middling pass rate, 37.3 percent.

Speaking of big spenders, a number of districts, mostly in the northeastern part of the state, spent considerably more than average but had difficulty raising student achievement. Northampton, Bertie, Anson, Hertford, Weldon City, and Halifax spent between $10,000 and $13,000 per student but had overall pass rates that fell below 25 percent.

Obviously, performance composites are one of many measures of student performance. Graduation rates, ACT scores, SAT scores, Workkeys results, and testing pass rates by grade and subgroup are a few of the many ways to measure student outcomes. Likewise, per student expenditures are one of a number of inputs that may be employed. Regardless of the variables used, we need to begin thinking about education reform in terms of productivity and returns on investment, concepts that, by the way, do preclude conceptualizing education as a social good. 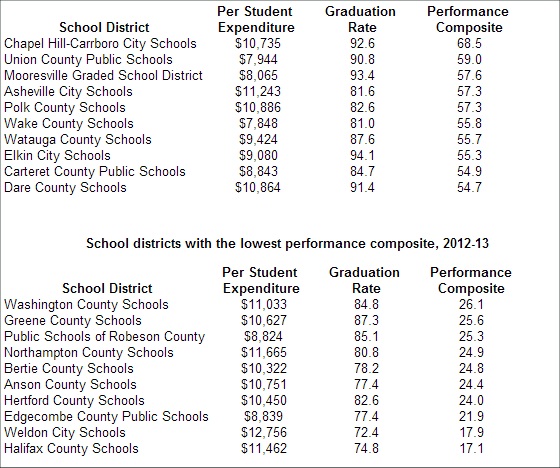 "For the next several years, preschool, K-12, and postsecondary educators are likely to face the challenge of doing more with less. My message is that this challenge can, and should be, embraced as an opportunity to make dramatic improvements. I believe enormous opportunities for improving the productivity of our education system lie ahead if we are smart, innovative, and courageous in rethinking the status quo." -- U.S. Secretary of Education Arne Duncan, "The New Normal: Doing More with Less--Secretary Arne Duncan's Remarks at the American Enterprise Institute," November 17, 2010

Click here for the Education Update archive.
Go Back