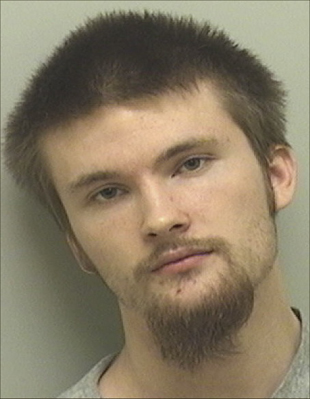 Tyler Joe Ussery
On December 12, 2013 at approximately 3:50 p.m., Deputies responded to the Beaufort County Detention Center in reference to a combative inmate. The inmate had been throwing toilet water on Detention Officers through the cell block bars. The inmate spit on the Detention Lieutenant when the Lieutenant tried to talk with him. The inmate also told officers that he was going to assault anyone who entered the cell block.

Before Deputies entered the cell block, the inmate attempted to use a bed sheet to tie the entrance door closed. This tactic prevents the electronic opening of the sliding bar doors in the facility and significantly slows the entry of officers into the cell block area. This would have subjected the officers to additional assaults as they worked to remove the sheet from the bars. To prevent this, the inmate was tasered and entrance was made into the block. Deputies secured the inmate in a restraint chair until he could be transported to a Department of Corrections facility.

As a result, Tyler Joe Ussery, age 19, of Morehead City, NC was charged with Felony Malicious Conduct by a Prisoner and six counts of Assault on a Government Official. Ussery was held on a $7,000.00 secured bond.