Inside Llewyn Davis | Beaufort County Now | The Folk scene in Greenwich Village, New York City, was a transformative time in American music. It does not particularly mean that all of the music was good, or especially unique, it just was a new wave of sound which should be understood from a historical context.

The Folk scene in Greenwich Village, New York City, circa 1961, was a trans-formative time in American music. It does not particularly mean that all of the music was good, or especially unique, it 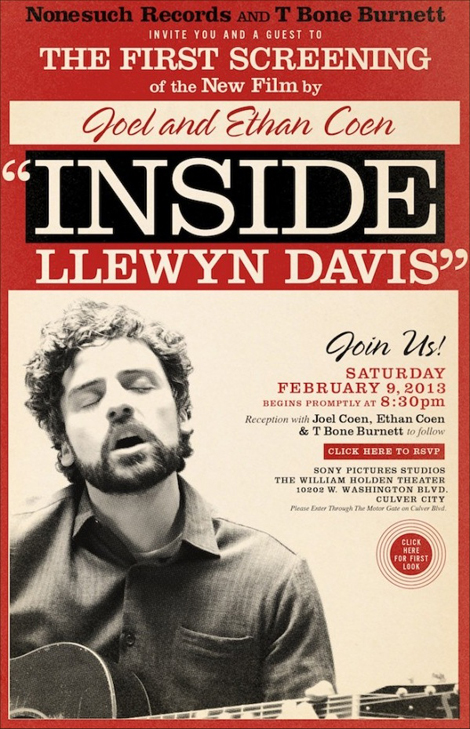 just was a new wave of sound, which should be understood from a historical context. For whatever purpose, Folkie Llewyn Davis just never fit into that time, in that place, in a manner comparable to his relative talent.

Llewyn Davis, played well enough by musician /actor Oscar Isaac, put up a wall around himself built upon the foundation of perpetual irony, which was destroying whatever career that he could have made for himself. Or possibly, the supreme irony would be that Llewyn would succeed because, or inspite of his impediment of an artist's unremarkable sense of misplaced priorities. We, the audience, however, will never know since all of this perfect prosperity for Llewyn was fundamentally fleeting. What we witnessed, after spending that one week in Llewyn's life, was that a talented Llewyn Davis was no closer to his objective of supporting himself by his melodious talents than when the week began; in fact, it did appear that, by the end of that week, he was drifting farther away from his original objective.

Llewyn's unsuccessful professional life was not only a product of his chronic inaptitude of misplaced priorities, but bad management, bad luck and no sense of promotion. All Llewyn did possess was an ample talent to create good music, and a profound knack of discovering his place in the supreme irony of perpetual 'bad karma'. In other words: No unique talent goes sufficiently rewarded in Llewyn Davis's bizarre world. 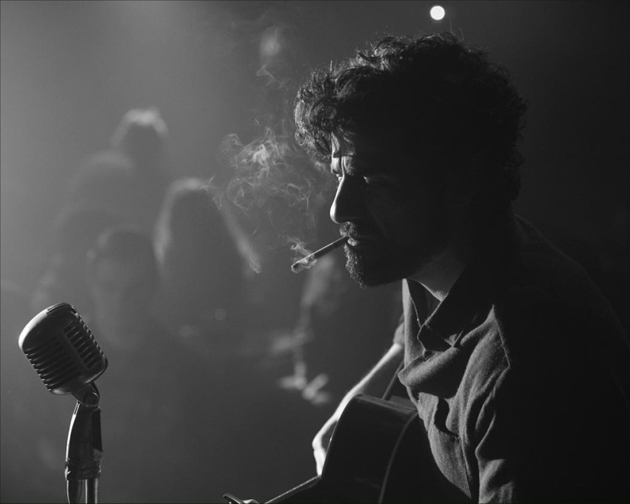 Llewyn Davis, Oscar Isaac, played his music well, but lived life on the run, and in the one week we get to know the man, we get a close sense that all is not regular or well, and chaos may be the man's only ally: Above and below.     Click image to expand. 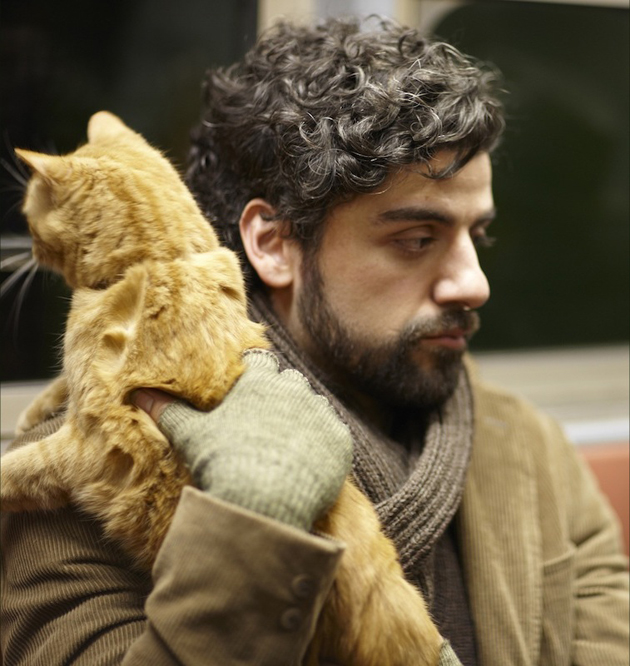 At one point during this unrelenting week of Llewyn's unrewarded life and avocation, he stated: "I'm tired. I thought I just needed a night's sleep but it's more than that."

The film, "Inside Llewyn Davis", was as much about the story of a misguided, poorly managed underdog as it was the nouveau-hip music scene in the Bohemian District of Greenwich Village, which took a variation of what was old and made it trendy, political. But the Coen brothers' film was not about politics - thank God - it was all about Llewyn Davis's life as a square peg in a very round scene, and Llewyn was losing ... badly. 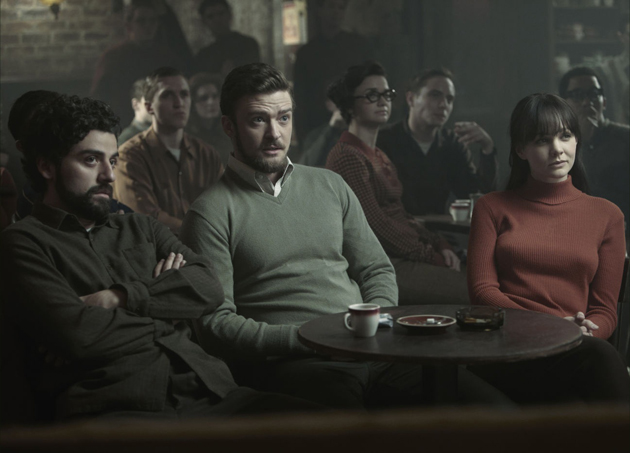 Llewyn Davis, Oscar Isaac, Jim Berkey, Justin Timberlake in a small but well performed role, and Jean Berkey, Carey Mulligan, survey the Folk scene at one of their usual clubs in Greenwich village, where they 'pass the hat' for remuneration: Above.    Llewyn Davis, Oscar Isaac, and Jim Berkey, Justin Timberlake, perform in the studio "Please Mr. Kennedy" - see the video at the bottom for the performance - worth your time to do so: Below.     Click image to expand. 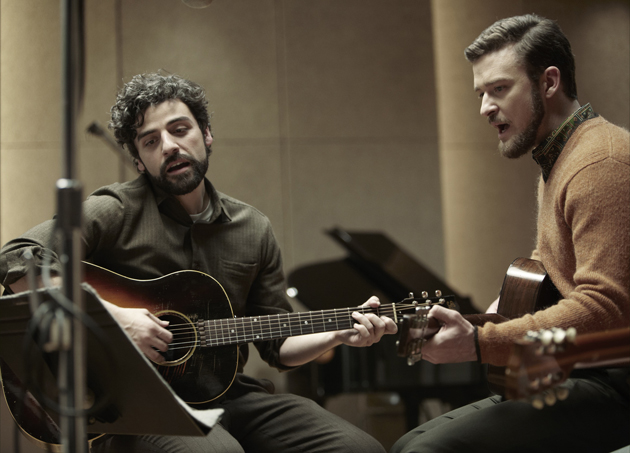 Joel and Ethan Coen have, once again, have written and directed a film that has purpose, however measured, and enough depth to make one wonder: Is this it for Llewyn ... does he make it ... or is this a formative part of his life as a poignant, possibly sad moment of remembrance in his golden years? You know, not everyone makes it; but most everyone contributes something. Llewyn contributed his musical talents, irrespective as to how well they were universally received. 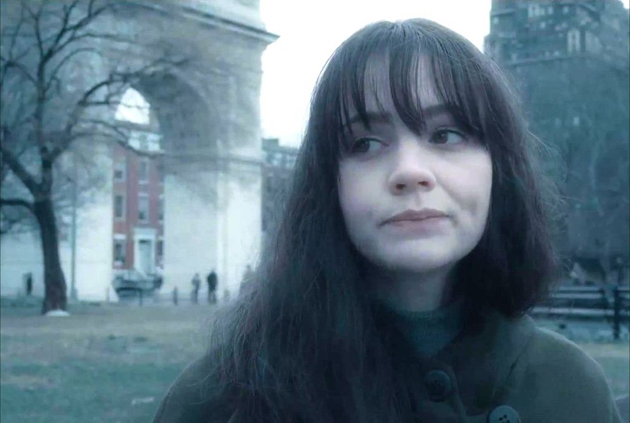 Jean Berkey, Carey Mulligan, may have had a venomous mouth in respect to Llewyn Davis, but she does cast an incredibly cute visage here with the iconic Arch of Washington Square in the background; Above.     Click image to expand.

Accordingly, not everyone felt that Llewyn contributed anything positive. The promiscuous Jean Berkey (and not just with Llewyn), played by Carey Mulligan, blamed Llewyn Davis for her most recent pregnancy, stating in a somewhat venomous manner: "I should have had you wear double condoms. But if you ever do it again, which is a favour to women everywhere you should not. But if you do, you should be wearing condom on condom. And then wrap it in electrical tape. You should just walk around always, inside a great big condom. Because you are shit!"

Sadly for Llewyn, he actually had feelings for Jean, regardless of her opinion of his person, which only serves to highlight Llewyn's most troubling flaw: He just did not understand people at their core - what made them who they are. That Llewyn made music, Folk music, that primarily spoke to 'better angels' within humanity is the film's supreme irony, amongst a backdrop of continual unrelenting multiples of ironies.
Go Back