Beyond Bricks And Mortar

In a display of patriotism, 166 miniature American flags were planted on East Carolina University's campus on Sunday.

In conjunction with Veterans Day, the Pirate Veterans Organization (PVO) is hosting the inaugural Field of Honor from Nov. 8-15 as a way for students, faculty and staff to recognize U.S. military service members. The display can be viewed in the Student Memorial Garden, which is located between the Erwin Building and Ledonia Wright Cultural Center.

"Most military bases put out a Field of Honor around their bases every year to honor those who have been killed in action," said Nicole Beck, president and co-founder of PVO. "We modified it so anyone who is serving, or has served, can be honored."

Each flag has a tag attached with the donor's name and who it honors, along with their rank, branch of service, years served and operations.

"We sold flags for $5 each and the proceeds from the flags are going to the Disabled American Veterans to help homeless veterans here in Pitt County," said Beck, who purchased flags for family members, her boyfriend and a friend who was killed in action.

The U.S. Department of Housing and Urban Development estimates that there are nearly 50,000 homeless veterans in the country. "Anyway we can help is amazing," said Beck, who served in the Army for almost nine years. "As a veteran, you never know - that could have been you."

Melissa Hall spent five years on active duty in the Marine Corps. She purchased flags to honor her grandfather and her husband's great-grandfather, who both served in World War II. She also contacted her former service members at the Marine Corps Base Camp Lejeune to tell them about PVO's event.

"Everybody chipped in to buy a bunch of flags for a Military Police dog handler killed in Afghanistan, Sgt. Joshua Ashley, and another Marine who was killed on duty recently, Lance Cpl. Mark Boterf," said Hall.

Now a junior at ECU studying mechanical engineering, Hall said she is proud to be a veteran. "I'm glad I did it, and it has helped me prepare for my future better," she said.

To learn more about the Pirate Veterans Organization, visit http://www.ecu.edu/cs-studentaffairs/studenttransitions/studentveterans/pirates_veterans_organizations.cfm. 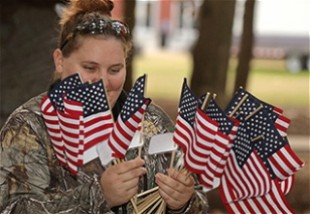 Nicole Beck sorts flags before placing them near the Memorial Garden. 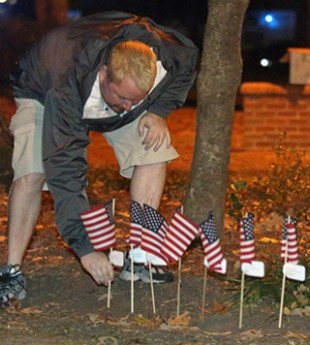 "Just being a veteran myself, to give back to other veterans, to me, it's the best thing," Causey said. "It was an honor to build it."

Causey and ECU masons John Phillips, Al Williams, Mike Gentile and the late James Boyd laid the bricks and mortar for the Memorial Walk and Freedom Wall on the west side of Christenbury Memorial Gymnasium in 2011. It was the first space set aside to honor military service on campus in nearly six decades.

"We did all this, the seat walls, all the pavers," Causey said pointing to the site of the annual Veterans Day ceremony at ECU.

Originally from Farmville, Causey served 12 years in the Army from 1983 until 1995 and is active in the N.C. National Guard. He fought in the Gulf War, and returned to Iraq with the National Guard.

He has been deployed twice in the eight years he has worked at ECU, the last about a year and a half ago to Egypt. "We were basically observing Egyptian and Israeli forces to make sure they complied with the peace treaty," he said.

Before taking the job with ECU, he worked many years with his father, also a brick mason who is now semi-retired. His uncles are brick masons, too.

"I've been doing this work since I've been old enough to tote a brick, roughly 30 years," Causey said. "I enjoy the art of it. Sometimes they give you an idea and you get to add in a little flair."

Causey also works with tile, block, stone and glass. "Basically anything with mortar in it," he said. "I love my job. I love the people I work with. The guys I work with are all very creative and very talented. You couldn't ask for a better environment."

Causey and his colleagues built the Student Memorial Garden, the retaining wall and step systems in front of Christenbury and revamped areas leading to McGinnis Theatre and Messick Theatre Arts Center. A Pirate football and baseball fan, Causey enjoyed building some brick-mounted benches at the ECU football practice field and, in the process, meeting Coach Ruffin McNeil.

There have been so many projects on campus it's hard to remember them all, he said, but the Memorial Walk is his favorite.

The design complemented the relocation of the Victory Bell - a memorial to World War II and Korean War veterans - and a granite panel honoring veterans from each branch of the armed services.

"The first year when we dedicated the site, the mason crew stood side by side on the sidewalk beside Christenbury gym. I'll never forget that sight," said Dr. Steve Duncan, assistant vice chancellor and director of military programs at ECU, who initiated the project. "They exuded pride in what they had done to recognize their veteran brothers and sisters over the years, and I feel honored to know that veterans like Ron Causey have left their print on this site for generations to come."

With the addition of 58 this fall, a total of 178 pavers now recognize the contributions of service members or supporters of veteran organizations and national defense.

"Interest has grown each year and I believe it is because this is a place of recognition and honor and very symbolic of our motto – To Serve," Duncan said.

Len Farris of Andover, Massachusetts, donated 30 of the pavers this year for his 1987 Air Force ROTC graduating class and staff at ECU. A Charlotte native, Farris said he chose to attend ECU because of its Air Force ROTC program. He earned a bachelor's in business administration and spent eight years on active duty as a navigator flying around the world. He participated in more than 25 combat support missions in Operation Desert Storm.

"I thought it would be an outstanding way to honor the men and women of our 1987 class and staff for their service and in turn to provide scholarship funding for a great program that meant so much to me and others," Farris said. Many in his class have participated in the donation, he said.

Causey expects the university will have to expand beyond the current site to add more brick pavers. "We always say, if they can draw it, we can do it."

Daren Roy helps sort flags for placement in the inaugural Veterans Field of Honor sponsored by the Pirates Veteran Organization to honor military service. (Photos by Cliff Hollis)
Go Back