An influential actress, producer, speaker and LGBT advocate brought an empowering message of moving beyond gender expectations and embracing differences to East Carolina University on Nov. 12.

"I stand before you this evening a proud African-American transgender woman," she said, receiving a standing ovation as soon as she appeared on stage. "It's important for me to say that because I haven't always been able to say that in public."

She rattled off sobering statistics of violence against transgender people. Last year, over 72 percent of all lesbian, gay, bisexual and transgender homicides were transgender women, and 67 percent of those were African-American. "Justice is what love looks like in public," she said. "Transgender people could use a little justice, a little love today."

Cox, who was born to a single mother in Mobile, Alabama, was bullied from preschool through high school because she acted too "feminine." She told the audience about how she swallowed a bottle of pills when she was in sixth grade and went to sleep praying she wouldn't wake up. "For many, many years, I didn't feel like I deserved love, but now I know I am worthy of love," she said.

Quoting several feminist authors, including Simone de Beauvoir, who said "One is not born, but rather becomes, a woman," Cox spoke about rising above heteronormative gender roles.

The take-home message was one of love and acceptance. "If we have misconceptions about people, I believe if we get to know them, those misconceptions will melt away," she said. "Difference is beautiful and it should be celebrated."

The free event, which filled every seat in Wright Auditorium, was sponsored by the Ledonia Wright Cultural Center, the LGBT Resource Office, Campus Living, the Office for Equity and Diversity, the Student Activities Board, the Department of Sociology and Student Involvement and Leadership.

"Tonight, I was proud to be a Pirate," said ECU senior Jessica Esterline. "I hope that the conversation continues and that we continue to educate one another on LGBTQ issues, because so many people need to know that they are valid, remarkable and useful in a society which continues to discriminate, especially towards transgender individuals."

Cox's appearance came at a pivotal time, as November is Transgender Awareness Month. The Transgender Day of Remembrance will be observed at 6 p.m. on Nov. 20 in the Green Room at the Croatan building.

"Each year we honor the memory of those lost to transphobia around the world," said Mark Rasdorf, assistant director for ECU's LGBT Resource Office. "The day is an important and very solemn recognition of the struggle for acceptance and equality within the trans community, and it's important for us to honor our brothers and sisters and to help educate people."

TRANS, a documentary featuring the lives of transgender people, will be shown in Hendrix Theater at 7 p.m. on Nov. 17.

The events are free and open to the public. For more information, visit http://www.ecu.edu/cs-cas/lgbt. 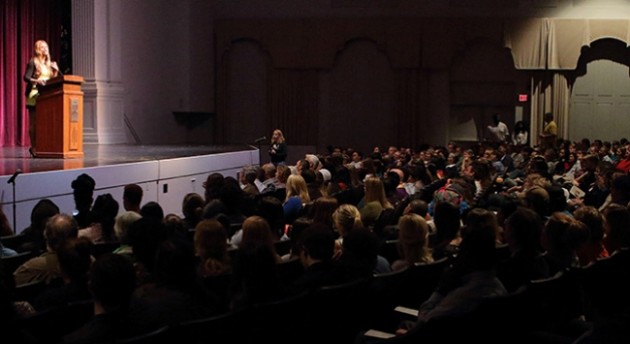 Wright Auditorium was sold out well in advance for the Nov. 12 presentation by Laverne Cox.

Transgender actress Laverne Cox urged the audience at ECU’s Wright Auditorium to celebrate differences during a presentation Nov. 12 on campus. (Photos by Cliff Hollis)
Go Back