The Judge | Beaufort County Now | Hey ... I got this joke: What is two lawyers, with the sir name of Palmer, chained to a engine block at the bottom of the river. Answer: A good start. Oh, you heard that one, or a variation of it, already.

Sometimes, you have to 'Go Home Again'

Hey ... I got this joke: What is two lawyers, with the sir name of Palmer, chained to a engine block at the bottom of the river. Answer: A good start. Oh, you heard that one, or a variation of it, already. 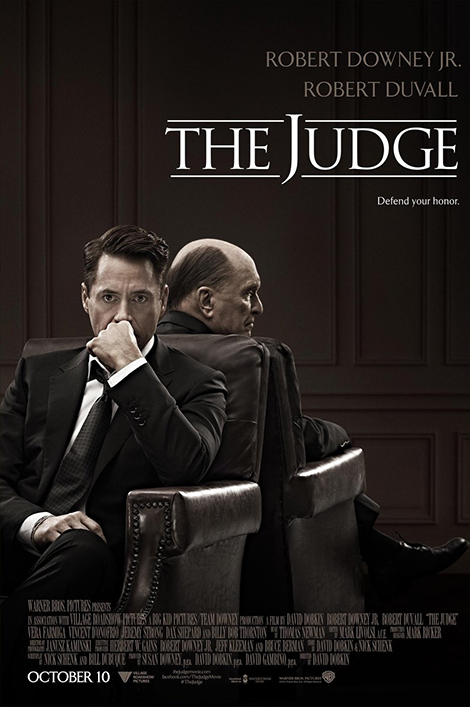 On the other hand, "The Judge" is no joke. It does sport some smart lines, peppy dialogue, and some well placed spasms of intended humor; however, it is a tale trampled into the familial mud of reality, and when that fabric is lifted from the dried up puddle; the caked mud shook free. It is a tale as real as Abraham and Issac. If not for the comic relief, the story would be lost in the tall weeds of anguish by proxy.

We good humans laugh at ourselves, and can surely laugh at the travails of strident lawyers bent on pressing their pedantic aura on their immediate audience. The Palmer lawyers, father and son - the judge, and the other a hired gun for law - were like two sides of the same mirror facing separate realities in opposing directions, but still similar in structured purpose. When we meet them, early in the film, we are immediately repulsed by their ever insistent egos. By the end of the film, we are drawn to their plight, as if we care for the story of their lives, the story of its associative outcome. I can only surmise that it must have been made possible by an excellent screenplay, by Director Nick Schenk, Screenplay Writer Bill Dubuque, and an outstanding cast of actors. 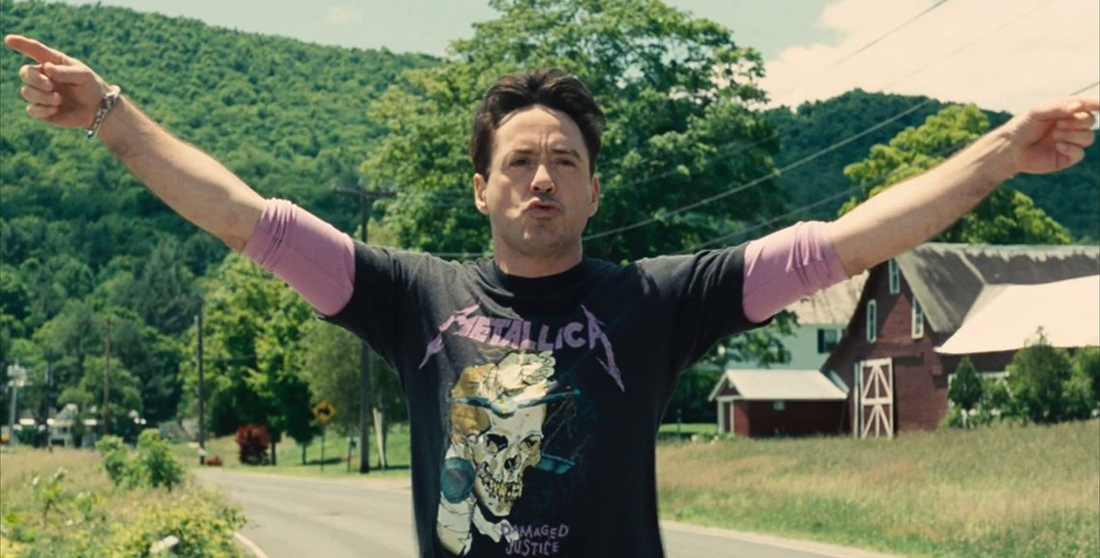 Those actors were phenomenal, and built the story into their every conscious exercise while deep into their characters' egos, the pathos to bring the audience along with them. In all story-driven films, like "The Judge", there must first be the content of the story, but then there must also exist the content of the character's dept to stand and deliver the essence of that story, so personal, so relevantly necessary. 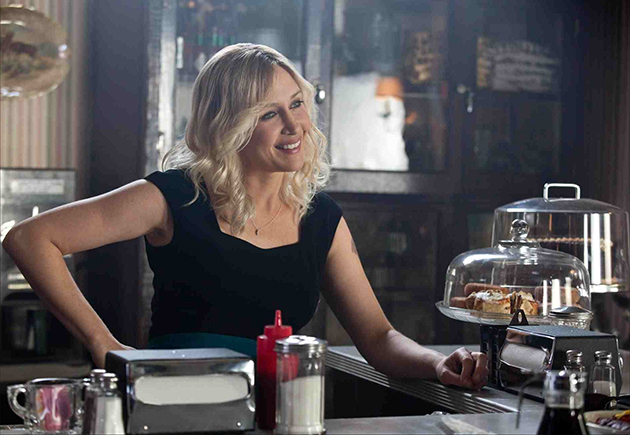 Those "poor players", who revealed so much to make this film work so well, are: Robert Downey Jr., as Hank Palmer; Robert Duvall, as Joseph Palmer; Vera Farmiga, as Samantha Powell; Billy Bob Thornton, as Dwight Dickham, Vincent D'Onofrio, as Glen Palmer; Jeremy Strong, as Dale Palmer. The film is centered around the Palmer family, therefore the strongest actors have the sir name of Palmer.

Judge Palmer, Robert Duvall, sets the stage for this obtuse morality play by being an Indiana judge for 42 years; actually, he became the Judge, dispensing justice, meting out punishment to all, especially his own, and especially his middle son, Henry "Hank" Palmer, a talented lawyer to the highest bidder.

Mike Kattan (assistant DA), played by David Krumholtz: "And how does it feel, Hank? Knowing that every client you represent is guilty?"

Hank Palmer, Robert Downey, Jr., in court, doing what he does best: Above.    Click image to expand.

Now, Hank is called to represent his father in the biggest case of his career, and he does it Pro Bono. Judge Joseph Palmer is arrested for killing a man on the same night of his wife's funeral, and Hank is raring to escape the estranged stranglehold that the Judge has over this familial compartment of Hank's battered and bruised ego. 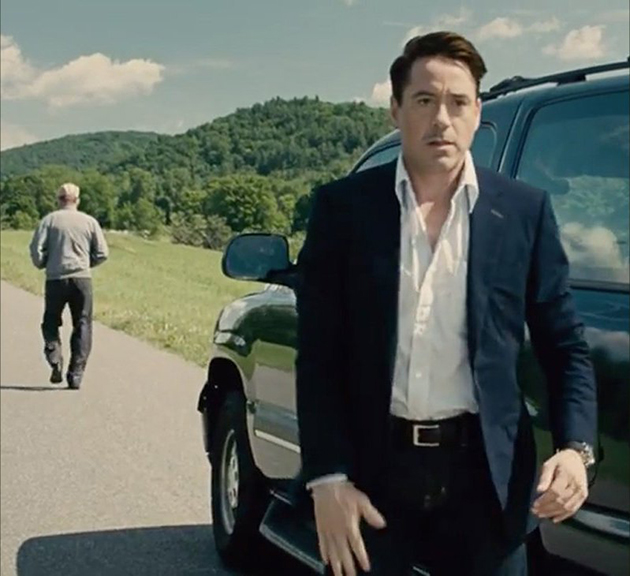 The Palmer lawyers, opposite in so many ways, heading in opposite directions, which is emblematic of their similar, yet estranged lives: Above.    Click image to expand.

It is an ego of a son, who had some tough adolescent years, who also deeply felt that his public servant father cared more about his job as the county's judge, than of his own son. Hank Palmer grew to have a 'chip on his shoulder', and made the most of every competitive situation, fairing well, except in the situation of living. And his deeply dysfunctional relationship with his father was the big meaty part of this sad soup.

Hank Palmer, Robert Downey, Jr.: [On the verge of tears] "You know, you'd invite people at the end of their parole back to court... You'd *recognize* those who did their time, turned their lives around, made something of themselves. Everyone in the court applauded, and you made sure they did! Tell them how *proud* you were... Proud of *fucking* strangers!"

Judge Joseph Palmer, Robert Duvall: "Is that all you wanted, Henry, was a kind word? An 'atta boy? Then to use your words, you should have *come* the *fuck* home! We all waited, *quietly*, but you never came. Okay? And I was the one she'd blame, because you wouldn't come home. Me. Now, was I tough on you? Yes. How'd you turn out, Henry? Waiting tables? A bum?"

One can imagine just how difficult it must have been for the Judge and the lawyer son to work together for a common goal - to seek a just resolution for the troubles at hand. 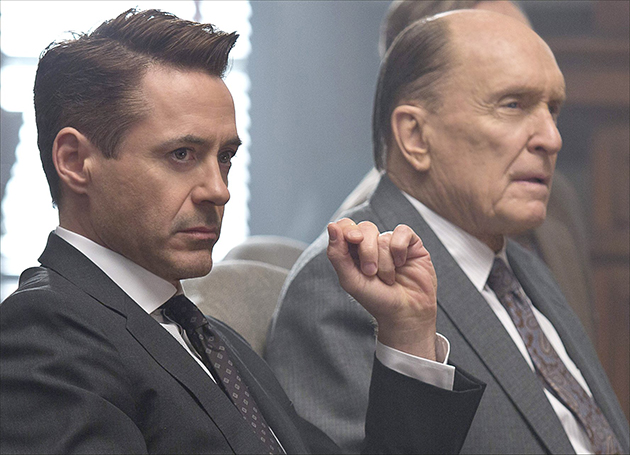 The Palmer lawyers, so much like one another, and yet so different: Above.    Click image to expand.

It was a tough case, and a tough time in the lives of father and son, and it was medicine that needed to be taken, without sugar, the full dose. Making matters worse is the prosecuting attorney, Dwight Dickham, brought in to prosecute the case. He was a screeching bird of prey, and he was ably prepared to do his job.

Dwight Dickham, Billy Bob Thornton: "You're a shined up wooden nickel, Mr Palmer. A bully with a bag of tricks. But unlike you, I have one simple belief. That the law is the only thing that's capable of making people equal. Now you may think that Mark Blackwell is white trash, and he may very well have been. But in the eyes of the state, his life matters. I'm going to impale your client on a first degree murder charge. And you get a front row seat." 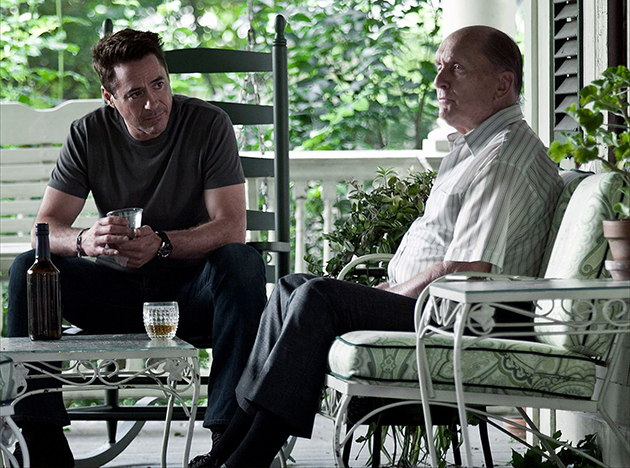 There is a possibility for peace. They are just so similar, these Palmers, these fine actors - Robert Downey, Jr. and the great Robert Duvall: Above.    Click image to expand.

This is no joke, the Palmers are impossible for an audience to love, but you may well care about them enough to care whether there is resolution to this story, and as convoluted as the path to reach that point, the story takes us there, and serves it up fresh and hard. To accomplish this feat, as difficult as a story of dysfunction can be, reminds me just how fine a film "The Judge" truly is.