The Interview | Beaufort County Now | I watched the comedy mostly out of morbid curiosity, with so much news devoted to the alleged North Korean hacking attack on Sony Films. To be honest, I did not expect much.

The Real World Contained Within an Interview ... NOT!

I watched the comedy mostly out of morbid curiosity, with so much news devoted to the alleged North Korean hacking attack on Sony Films. To be honest, I did not expect much. In recent Seth Rogen vehicles, like "Neighbors", 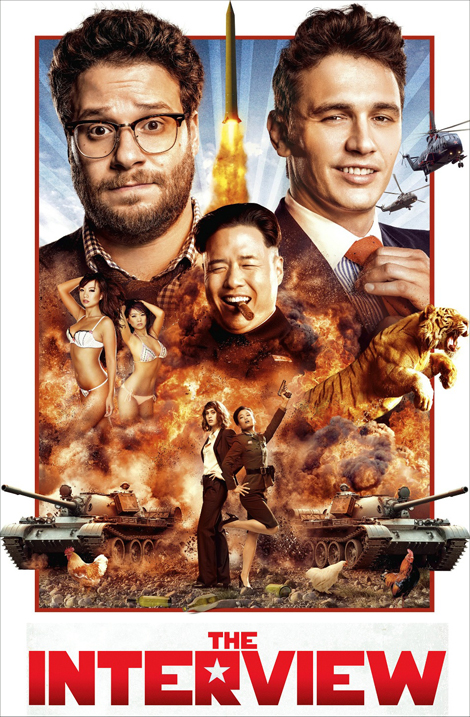 which was a poorly conceived sophomoric romp through an unrealistically contrived social experiment of pitting fraternity house next to a young, hip family. Couple that with Seth Rogen's insensitive, rather unsophisticated remarks about Chris Kyle's "American Sniper" did repel my ambition to view this much discussed comedy; however, I did acquiesce, and did experience "The Interview", as a thesis of an American pop journalist implored by the CIA to assassinate the North Korean totalitarian dictator, Kim Jong-un.

Crazy premise; might work for a comedy; however, I still almost did not see the movie, much less write the review due to Seth Rogen's inane comments likening American hero Chris Kyle to the Wehrmacht sniper from Inglourious Basterds. Then it hit me, as it is my nature to be resoundingly fair, I should see the film, do the review since it is a much storied project, and guess what I discovered? It was not a bad comedy, and yes, a bunch of funny moments.

Much of those funny moments are built around James Franco's 'over-the-top' performance, as Dave Skylark - the gonzo pop journalist, who dances well along the fringes of idiocy - becomes the fulcrum where the bulk of the comedy is catapulted. Seth Rogen, as Aaron Rapaport the producer, who is only marginally the adult, is the straight man to James Franco's functional idiot Dave Sylark. As a comedy, Writer Rogen styled many funny moments; however, as a story, Writer Rogen left enough holes to drive a vintage Russian built tank through - one that a M1 Abrams could dispatch in tens of seconds if necessary. Fortunately, the film succeeds by the 'skin of its teeth', and escapes the killing blow of just being too bad to consider as a viable movie. 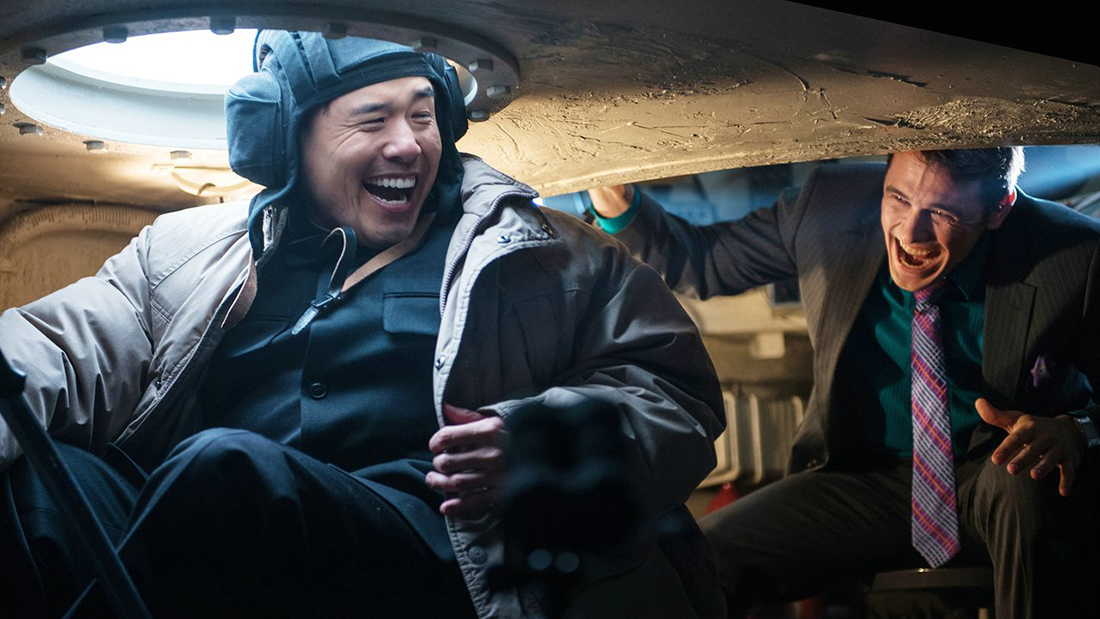 In the Russian built tank with Lil' Kim (left), played by Randall Park (actually, his performance is one of the best of the movie), and Dave Skylark (right), James Franco: Above.     Click on image to expand.

It is a comedy built upon an unrealistic premise of Kim Jong-un inviting this pop journalist, Dave Skylark, to interview him as a point of propaganda. Enter the CIA, who requests that the quasi-journalist, Skylark assassinate the diminutive monster who, as a nuclear totalitarian, continues to terrorize his country, and the world at large. 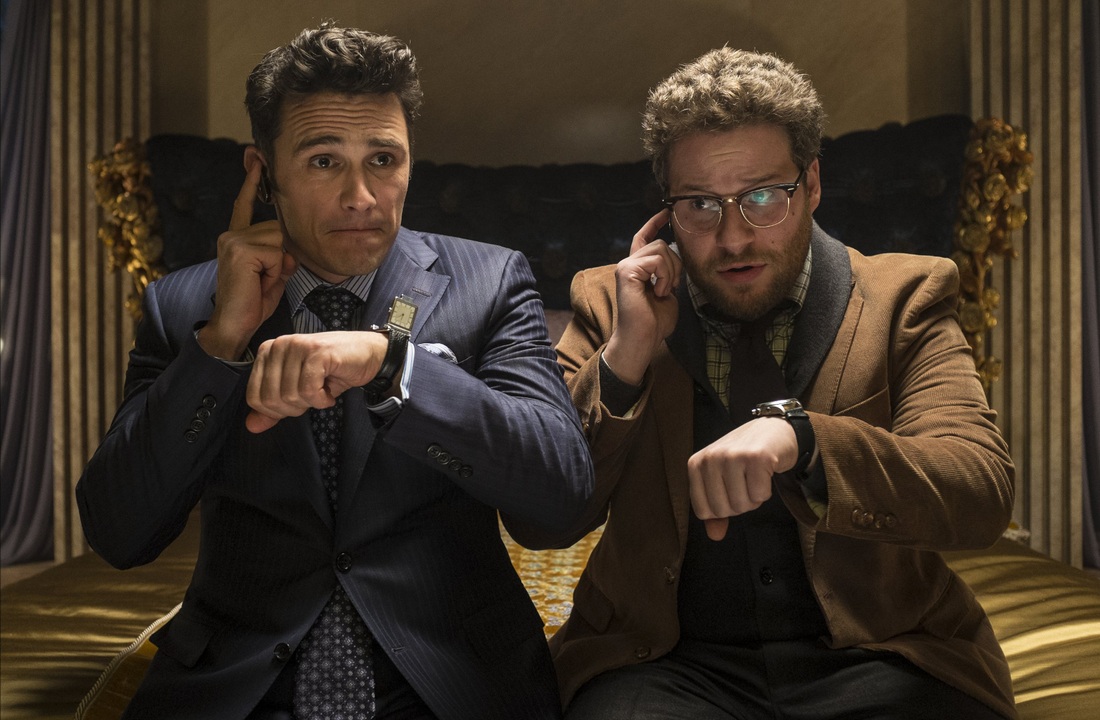 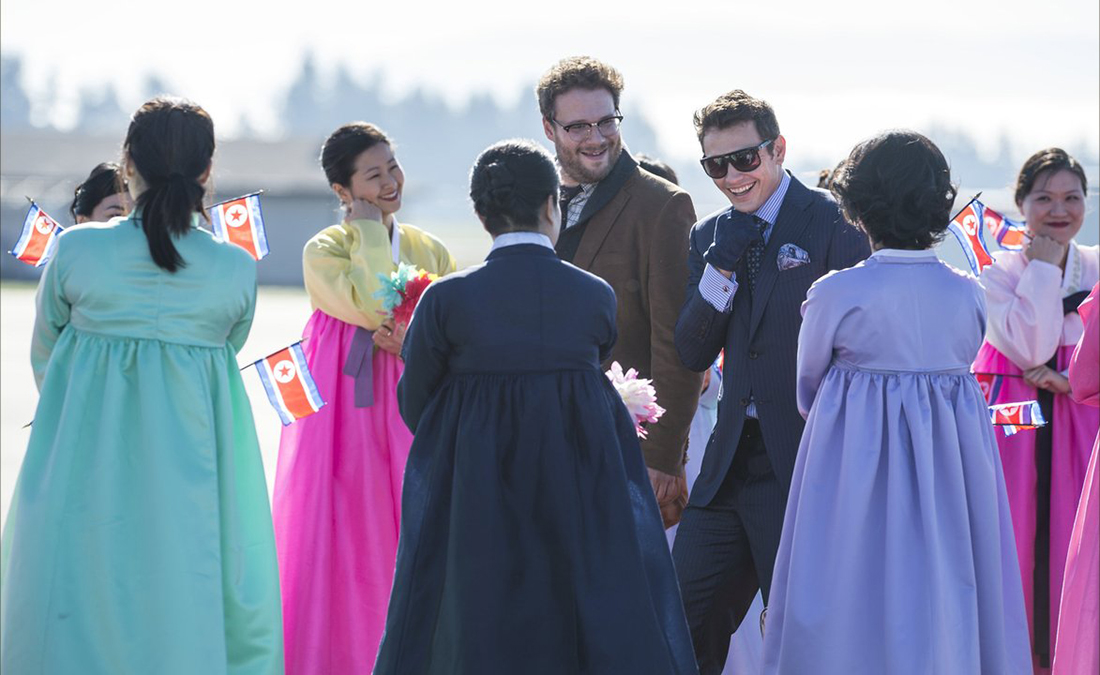 "The Interview" is crass, crude, irreverent and vulgar, and while it is a major detraction; because the movie is crass, crude, irreverent and vulgar it is also an asset to propel the movie into a functioning comedy. Should you view "The Interview"? Only if you are not easily offended. Offensive comedy works, but only if the creators of such dance a delicate line with folks like me. I can not be responsible for your sensibilities to make it through this movie with one hour and fifty-two minutes of runtime. 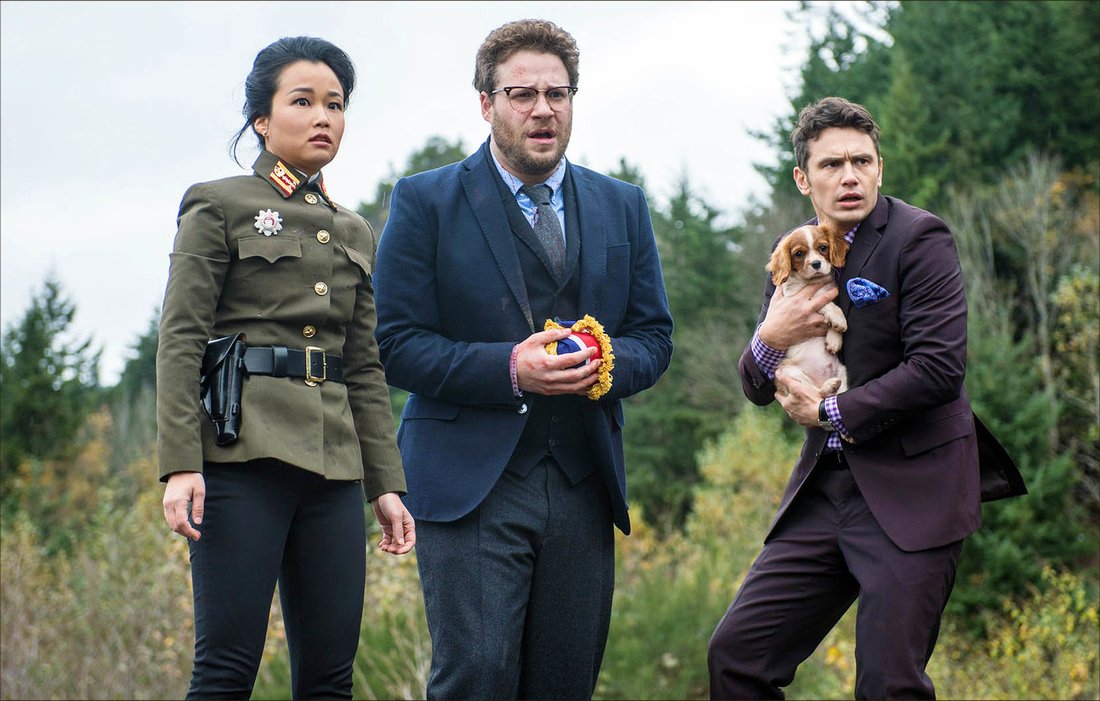 At the end of the movie, these unlikely heroes: Seth Rogen is missing fingers, James Franco is still a functioning idiot, and Diana Bang, as Sook, is still a badly dressed dwarf, but hey, that's comedy.

Released on a variety of platforms in the month of January, 2015, with an extreme limited release on Christmas Day. Rated R.

Come join us at our new Movie Database. We welcome you to our latest feature to sort through film data to discover information on actors, directors, film images, or just what is playing, when it will pay, or when it did play. It is a work in progress, so we would appreciate your input.

poll#67
Understanding that many strident Liberals have an abject repulsion to the biopic American Sniper: What should be one's well considered reaction to some of their explicit speech?
77.85%   Chris Kyle was a true American hero, and Liberals should measure their harsh words.
0.63%   Chris Kyle was a murderer of women and children, which he did to satisfy his profound racism.
21.52%   It was an outstanding film that truly communicated its truth. Get over it.
158 total vote(s)     Voting has Ended!
Go Back