GDP Is Not Economic Growth


1. GDP is not economic growth

In his recent article titled "Fooled by GDP: Economic Activity vs Economic Growth" for the Freeman (monthly magazine of the Foundation for Economic Education), Professor Steve Horwitz of St. Lawrence University asks and answers a very important question: Does Gross Domestic Product (GDP) measure economic growth, as it is typically represented as doing? His answer is no. In fact he argues that at best it is a measure of economic activity, which is something that is really quite different than economic growth. I believe that his article should be required reading for every introductory course in macroeconomics.

Horwitz starts out by explaining what it is that GDP statistics are measuring.


GDP is calculated by attempting to measure the market value of final goods and services produced in a particular geographic area over a specific period. By "final" goods and services, we mean the goods and services purchased by the end consumer, and that means excluding the various exchanges of inputs that went into making them. We count the loaf of bread you buy for sandwiches, but not the purchase of flour by the firm that produced the bread.

This kind of explanation will be found in every textbook in macroeconomics. But his very next statement, or anything like it, while undeniably true, will typically be absent.


What GDP does not distinguish...is whether the exchanges that are taking place — even the total quantity of final goods — actually improve human lives.


consider how often people point to the supposed silver lining of natural disasters: all the jobs that will be created in the recovery process. I am writing this column at the airport in New Orleans, where, after Katrina, unemployment was very low and GDP measures were high. All of that cleanup activity counted as part of GDP, but I don't think we want to say that rebuilding a devastated city is "economic growth" — or even that it's any kind of silver lining. At best, such activity just returns us to where we were before the disaster, having used up in the process resources that could have been devoted to improving lives.

And what about nations that "devote a great deal of resources to building enormous monuments to their leaders"? I would add to this large and fancy government office buildings of the type found in Washington, DC, or even Raleigh.

As Horwitz notes these countries (or states):


will see their GDP rise as a result. The purchase of the final goods and labor services to make such monuments will add to GDP, but whether they improve human lives and should genuinely constitute "economic growth" is much less obvious.

Ultimately he notes that this understanding of GDP applies to communist nations like the former Soviet Union with a vengeance. For many decades people pointed to GDP in these countries as evidence that their systems could indeed produce economic growth. Of course the iron curtain finally fell, and the world had a chance to see first hand the difference between GDP and economic growth. The standard of living in many of these countries was at third world levels. Horwitz drives home the point:


The Soviet Union could indeed produce "stuff," but when you look at the actual lives of the typical citizen, the stuff being produced did not translate into meaningful improvements in those lives.

The 2015 ozone season began on April 1 and, as I have been doing since this newsletter was started, each week during the ozone season this newsletter will report how many, if any, high ozone days have been experienced throughout the state during the previous week, where they were experienced, and how many have been recorded during the entire season to date. (Note: ground level ozone, which is what we are reporting on, is often called "smog.") According to current EPA standards, a region or county experiences a high ozone day if a monitor in that area registers the amount of ozone in the air as 76 parts per billion (ppb) or greater. The official ozone season will end on October 31. All reported data is preliminary and issued by the North Carolina Division of Air Quality, which is part of the state's Department of Environment and Natural Resources. Thus far this season there have been three high ozone days recorded on any of the state's 42 monitors. All three occurred the week of June 25.

The table below shows all of the North Carolina's ozone monitors and the high reading on those monitors for each day of the 7-day period, July 27-August 2. 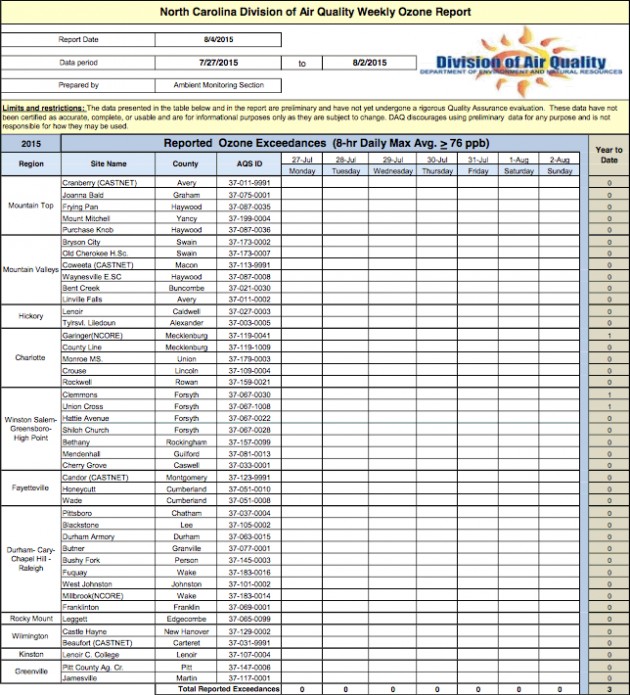