"While he now calls the practice 'diabolical' and 'unfair,' Raleigh Insider Roy Cooper was the gerrymandering king when he was in the legislature back in the 80s and 90s, even defending his redistricting maps all the way to the U.S. Supreme Court. With this flip-flop, Roy Cooper has shown North Carolinians that he will say or do anything to help resurrect the Democrat state machine in Raleigh."    - Kara Carter, NCGOP Press Secretary

In July, Roy Cooper tweeted his support for "nonpartisan redistricting," calling the practice of gerrymandering "diabolical" and "unfair" 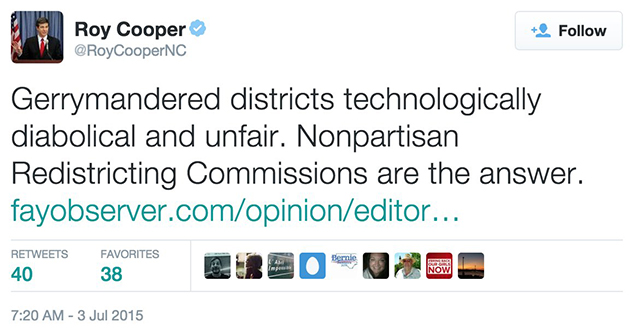 
When he was in charge of the redistricting process in the legislature for the Democrats, Roy Cooper was against nonpartisan redistricting commissions

•  "Cooper has some reservations about giving the task to a commission because redistricting is necessarily a political process. Leaving the job to a commission removes it another step from the people while raising the possibility that partisan influences might sneak in under cover of bipartisanship. The senator has a point." (Editorial: "LET AN OUTSIDE BODY DO THE REDISTRICTING," Greensboro News & Record, 1/29/1997)

While he served in the legislature, Roy Cooper controlled the Democrat's redistricting process

•  Roy Cooper: "North Carolina may be the Bermuda Triangle of redistricting." (Editorial: "Great Salt Lake, get over it," Wilmington Star-News, 4/1/2002)

By his own admission, Cooper hand-drew the 1997 legislative districts largely on the basis of race

•  "Even defenders have said the legislative districts may be on shaky ground. Sen. Roy Cooper, a Nash County Democrat who was chairman of the Senate's redistricting efforts last year, has said the legislative districts 'in my opinion will be very hard to defend, because race was the predominant factor.'" (Jim Morrill, "DISTRICTS COULD GET AX TODAY," Charlotte Observer, 3/31/1998)

•  "The 1997 e-mail from legislative staffer Gerry Cohen to former Democratic Sen. Leslie Winner of Charlotte and Sen. Roy Cooper, D-Nash - both active in the redistricting effort - reported transferring the "Greensboro Black community" into the 12th and 60,000 other voters, mainly white, out of it." (Jim Morrill, "SUPREME COURT EXAMINES 12TH DISTRICT'S ORIGINS," Charlotte Observer, 11/28/2000)

•  "A majority-black congressional district drawn by the General Assembly in 1997 is unconstitutional, a three-judge federal panel ruled Tuesday in a trial over whether race played too large a factor in creating the district's boundaries." ("N.C. District Unconstitutional," The Associated Press, 3/7/2000)

•  A three-judge federal district court found its boundaries unconstitutionally tainted because of their classification of voters by race in violation of the equal protection clause of the 14th Amendment. (Column: Bruce Fein, "Racism-lite in redistricting," The Washington Times, 4/21/2001)

Cooper appealed the case to the Supreme Court

•  "State Sen. Roy Cooper, D-Nash, head of the Senate's redistricting committee, said the state is appealing the ruling in hopes it can prevent the General Assembly's next redistricting effort from getting bogged down in a similar mess." (Taft Wireback, "STATE FIGHTS RULING ON 12TH DISTRICT: NORTH CAROLINA WILL ASK THE U.S. SUPREME COURT TO STAY A RULING THAT CASTS THE STATE'S CONGRESSIONAL PRIMARIES IN DOUBT AGAIN," Greensboro News & Record, 3/9/2000)

•  "The General Assembly is a body shaped and controlled by party politics, said Sen. Roy Cooper, a Rocky Mount Democrat and the chairman of the Senate's redistricting committee. Lawmakers of neither stripe will ever agree to new congressional districts that disrupt the political careers of their parties' candidates, Cooper said. 'You need a district plan that protects the incumbents to get it past the General Assembly,' he said." (John Cochran, "PARTIES PLAN SIMILAR MAP FOR DISTRICT," Greensboro News & Record, 2/22/1997)

•  "Sen. Roy Cooper, D-Nash, who heads the state Senate's redistricting committee, told the Democrats the plan offers them an 'excellent chance' for re-election" (Foon Rhee, "WHAT CAN YOU SAY GOOD ABOUT REDISTRICTING?" Charlotte Observer, 2/27/1997)