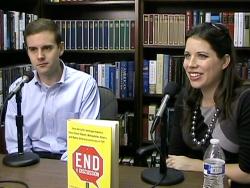 Guy Benson & Mary Katharine Ham
RALEIGH     Political discussion often involves debate over competing ideas. But some partisans want no debate. They would rather declare certain views off-limits. It's a tactic that disturbs Guy Benson and Mary Katharine Ham, co-authors of the book End of Discussion: How the Left's Outrage Industry Shuts Down Debate, Manipulates Voters, and Makes America Less Free (And Fun). Benson and Ham, who are also Fox News contributors, recently discussed their book during a John Locke Foundation Headliner luncheon. They shared themes from their work with Mitch Kokai for Carolina Journal Radio. (Click here to find a station near you or to learn about the weekly CJ Radio podcast.)

Kokai: We like to discuss things on this show, but now we're discussing a book called End of Discussion. Tell us what this is all about.

Benson: Well, we also like discussion, which is why we wrote End of Discussion. We're concerned about a trend that we recognize in this country that seems to be accelerating that is, I would say, mostly a product of the left — not exclusively, but mostly — where they are trying to "win" political debates and cultural debates by preventing those debates from ever happening.

Rather than taking on their ideas, or our ideas, or any ideas on an even or level playing field, they're trying to eject the opposition off of that playing field before the proverbial game gets going. So it's a project of disqualification, delegitimization, demonization, rather than actually grappling with thoughts and disagreements.

Ham: I think we've all felt it. Guy and I certainly have coming up in public commentary together. We've been friends for about eight to 10 years now, and we felt like, "Oh, there do seem to be a lot more topics that are off-limits or scary talk about where you're sort of walking on eggshells."

And even more concerning than that is we're public figures; we take on some language policing as part of our jobs. But just regular people are feeling this sort of becoming pariahs, being called racists, or homophobes, or whatever the ism of the day is, just for expressing a political position on Facebook. And we felt like this is not the America we want to live in, where this trend continues to accelerate.

Kokai: The subtitle of the book ... is How the Left's Outrage Industry Shuts Down Debate, Manipulates Voters, and Makes America Less Free (and Fun). So we're going to get into some of that. First of all, we've sort of talked about how the left is trying to shut down debate. How do they use this "end of discussion" to manipulate voters?

Benson: I think part of it is ... for example, we have a chapter in End of Discussion called "Anatomy of an Outrage," where we break down how one of these controversies got going, how it burst onto the scene, spread, and became a national news story. And it involves [U.S. Rep.] Paul Ryan of Wisconsin, who was of course on the Republican ticket in 2012, and he had put together, after many months of careful study, he put together an anti-poverty program that was conservative in nature, and he introduced it.

And he was giving an interview, a radio interview about his program, about his policy proposals, and at one point he was talking about cyclical, generational worklessness in "inner cities."

And that was immediately taken, spun into that he was talking about black people, which he never said, and that he was calling them lazy, which he also never said. And it sort of spread because there were a lot of different players. There was the Democratic Party, there was MSNBC and the left-wing blogosphere. There were various activists around the country, some of whom went to town hall meetings that he was at, and the idea is to say, "Look at this prominent Republican just being a racist," rather than actually taking on his actual policy proposals and saying, "Hey, we might agree with this, we disagree with this. Here is why we think this would be bad policy for underprivileged Americans."

That was not the goal. The goal was to say "racist, bad, evil." "It doesn't matter what the fine print says. This is a bad, racist project." That is emotionally manipulative. And it's a shortcut to saying, "Hey, his motives here are questionable, so that's all you need to know."

Ham: And here is the thing: We run into people still who are news junkies, who are predisposed to like Paul Ryan who say to us, "Oh, I didn't know that's not what he said." Well, that's the point. And when it works that way, you don't get to learn what he's for, what he is proposing. You don't get an intellectual discussion of those policies. You don't get honest disagreement about things.

You just get name-calling and a bunch of people assuming that another person is bad because they happen to disagree with them, which does not get us anywhere closer to solving the poverty problem.

Benson: Right. And the thing is the left loves to say a couple of things. One is: "Conservatives don't care about poor people. They only care about protecting their rich buddies." That's one. And other one is: "Republicans, all they do is complain about Obama. They have no ideas, no alternatives."

Here is Paul Ryan crafting a very comprehensive, detailed project that demonstrates that he cares about poor people, that is an alternative to the status quo and to the Obama agenda. And rather than actually acknowledging any of that, they're just like, "Boom, racist, we're done here."

Ham: Something we talk about a lot in the book and we really wanted to make part of the book End of Discussion is, look, when you get outraged about every single thing every day, your fun quotient is going down every single day. And one of the things that the left is now very interested in doing, particularly on university campuses, is shielding people from entertainment choices because you can't possibly listen to a comedian who might say some things that offend you and recuperate from that.

College students need safe spaces from people who disagree with them. They need to disinvite every commencement speaker who might disagree with them. And so what we argue is, "Look, when you can't have a comedian on campus" — and, by the way, it's not just us saying this. It's Jerry Seinfeld saying, "I don't do college campuses." It's Jay Leno echoing those thoughts. [It's] Chris Rock saying, "These places are just too quick to call you racist or sexist, and so I don't do it anymore."

Benson: Yeah. And I think when we're talking about America becoming less free, there are so many examples that we get into in End of Discussion on very serious subjects. We have a chapter about sort of the tensions between gay rights and religious liberties, which I think is sort of ground zero of some of these fights that we're having, where people are deprived of their livelihood, people fired from jobs for thinking the wrong things.

There is definitely a stifling environment when it comes to basically thought crime that is making the country less free. But we really did want to emphasize the "less fun" part as well. We have an entire chapter on the war on comedy, and how the left and these nannies, these scolds, these neo-puritans, as Mary Katharine says, are robbing us of laughter and enjoyment for their own sort of political agenda. And that sucks.

Kokai: Is that the technical term?

Benson: It is. It's a term of art. We don't want to be a part of that. And it's also part of the reason that we wrote End of Discussion in the tone that we did. We did not want to write an outraged book about outrage.
Go Back