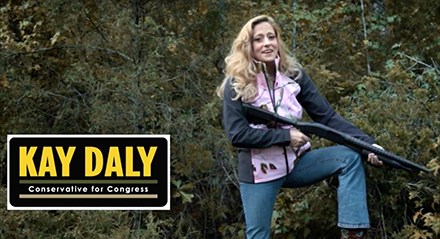 A lifelong conservative activist, Daly is the former Communications Director for the North Carolina Republican Party, and has experience as a staff member for both Senate and House Republicans going back nearly thirty years, including service as Press Secretary to former Congressman Fred Heineman (R-Wake/Chatham).

A complete list of the endorsements Kay Daly has received to date is available on her web site, www.KayDaly.com.

Daly lives in Moore County with her three children and her husband, who is an attorney, a disabled American veteran, and a former Chief of Staff for a United States Congressman himself. With her connections and experience, Daly enters the race as the presumptive favorite among the several rumored or announced candidates challenging the incumbent.

The seat is currently held by Renee Ellmers of Harnett County, whose abrasive personality, pro-amnesty stance, and generally moderate to liberal voting record have infuriated North Carolina conservatives and made Ellmers the consensus number one incumbent target in the country.

As rated by a composite of national conservative organizations, Ellmers presently has the least conservative voting record of any Republican elected to federal office in the Carolinas. Of the 20 such officials, Ellmers ranks 20th, just above South Carolina's Lindsey Graham. As a liberal Republican representing a very conservative district that gave George Bush 64% of the vote in 2004, experts consider Ellmers extremely vulnerable to challenge from the right; the race is thus widely expected to receive near constant national attention.

Daly's politics run decidedly to the right of Ellmers', who has previously identified herself as a feminist. Daly says she will make the latter's radical feminism and her support for amnesty for illegal aliens, tax increases, funding of Obamacare, the Equal Rights Amendment, homosexual marriage, and repeated raises of the debt ceiling central to her campaign. Daly also contends that Ellmers' votes to cut veterans' benefits and gut the military budget have betrayed her constituents, who include the residents of Fort Bragg, the most populous military base in America.

Daly's first television ad, which played throughout much of North Carolina Wednesday night during the Presidential Debate, takes an aggressive stance against Ellmers' liberal voting record. The transcript is as follows:

"This feminist voted to cut veterans' benefits and to gut the military budget. She sponsored a tax increase and the radical E.R.A., and voted to let homosexuals pretend they're married. She's a 'R.I.N.O.' who voted to fund Obamacare and to raise the debt ceiling - TWICE - to pay for abortions in D.C. and to fund Planned Butcherhood. She's pro-amnesty, and voted to let convicted illegal alien child molesters stay in America."

The ad features Renee Ellmers saying, "You know, as a Republican, you can be a RINO," and explains that "R.I.N.O." is an acronym for "Republican In Name Only."

Daly appears at the end of the advertisement in a wooded setting wearing hunting clothing with pink accents and carrying a shotgun, saying, "I'm Kay Daly, and this is my message. I'm hunting 'RINOs': care to join me?" The spot ends with her discharging the shotgun on camera.

"It's a hard hitting ad," says Daly, "and that's exactly the way I am going to conduct this campaign. There are very real differences between my principled conservatism and whatever it is that guides Ms. Ellmers' decisions, and I intend for the voters to see that clearly. Renee has betrayed her constituents, betrayed the military, betrayed her campaign promises, and betrayed the pro-life community. She has repeatedly voted with the Democrats to saddle my children with a debt burden that is so immense it cannot be repaid. This is for the future of our country, and I'm not going to pull any punches until the last vote is counted."

Conservatives have responded to Daly's candidacy with jubilation: "This is the big player we have been looking for to take on Ellmers," said Tea Party Nation founder Judson Phillips. "We've been praying for someone like her to agree to run, and now it has happened. This is a dream come true for conservatives in North Carolina's 2nd District and across the nation."