Login to Send a Private Message to Stan Deatherage
Not unlike the the Charlie Hebdo attack, January, 2015, where Islamist Terrorists attacked France at its heart, these 6 coordinated attacks of November 13, 2015 proved that France still is not ready to fight a very visible foe. Neither is Obama's America ready to fight this very estimable foe - not Obama's "Jayvee Team". 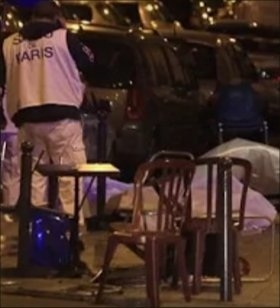 The "Jayvee Team", ISIS, as underplayed by American President Hussein Obama shortly after his Benghazi Cover-up was initiated, attacked multiple locations in Paris, France, killing many, wounding more. In these Friday the 13th Terrorist Attacks, ISIS has not claimed responsibility, but at least one arrested in conjunction to these attacks has claimed to be a member of ISIS.

America's Amateur President vowed to "Bring those responsible to justice"; but, we heard this all before. You remember all of these pronouncements before - at least twice: before the Benghazi cover-up (at least Obama put an American film maker in jail for over two years), and then after the IRS Political Targeting Scandal (feigned outrage at this news conference, and then promptly stonewalled congress's investigations, and summarily forgot; it was yet another Obama lie, or criminal act).

The worst of the terrorist attacks was at the Bataclan Theater, where over 115 attendees of a heavy metal concert by an American band, Eagles of Death Metal, died blood soaked deaths. It was grisly, and the French have every right to be concerned, even to the point of marshal law; however, they should not count on Obama for any measurable support. If by forthcoming measurable support, Obama could offer: 'leading from behind' as in the Libyan conflict; surrendering held territory as in Iraq; feigning outrage over the Benghazi Terrorist attack, and then did nearly nothing seek justice for these Islamist Terrorist murder; a 'red line in the sand' in Syria, then he shrank from his promise; negotiating away American prestige to Iran and with Islamist terrorists, and so much more; The Barack is your "peace-loving-man".

The full truth of the matter is trust in Obama, and trust in American is in limited quantity abroad, and is never feared by our collective enemies now when needed to be. While Hussein Obama is president, France, actually, no nation should depend on Obama's America for any real leadership or support. As ISIS comes knocking at our broad door, America will need a real president to lead our Republic and then to save it.


Video of the Bataclan Theater terrorist tragedy, where the Paris police tarried in their rescue, and was the worst of it in France: Below.