"Dr. King was the first to say that there are many heroes in the fight for equality," Governor McCrory said. "Today we not only honor those who fought for justice in the past, but celebrate young people who will take us to new heights of fellowship and scholarship."

The Hamlin Drug Company first opened its doors in downtown Raleigh in 1904 and Johnson, a pharmacist by trade, bought the drug store with a partner. The governor noted that Hamlin Drug has always welcomed customers through the front door and praised Johnson for his dedication for looking out for the health of his customers for nearly five decades.

Governor McCrory also presented the Order of the Long Leaf Pine posthumously to John and Selelia Griffith of Yancey County. The Griffiths sued the Yancey County School Board in federal court in 1959 to enforce integration provisions of the 1954 Supreme Court Brown v. Board of Education decision.

Despite the Brown ruling, Yancey County segregated students to the point of bussing black high school students and later elementary and middle school students 40 miles away to Asheville until the Griffiths won their court challenge in September 1960. 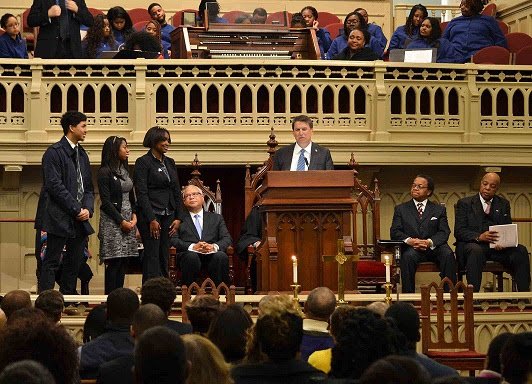 Stanley C. Melvin, Center Director at Pitt Regional Detention Center was awarded the John R. Larkins award, the highest civil rights honor that can be won by a state employee. The award was presented by Secretary of Administration and Human Relations.