Jewel's "Picking Up the Pieces" Tour Expands her Comfortable Range in Durham's Carolina Theater | Beaufort County Now | Jewel's "Picking Up the Pieces" Tour, showcased March 19, 2016 at Durham's Carolina Theater, is ancillary to her autobiography, "Never Broken", which is at the nexus of her every one woman show; it is her all consuming theme projected well, her life as a poetic masterpiece.

Login to Send a Private Message to Stan Deatherage
This is a work in progress, so please keep checking in on this post as I complete it and refine it. I may have much to say on this one.


Jewel Kilcher pronounces herself a feminist, infuses her estimable talent into the mix, then produces a message of wondrous hope and praise for the human condition. 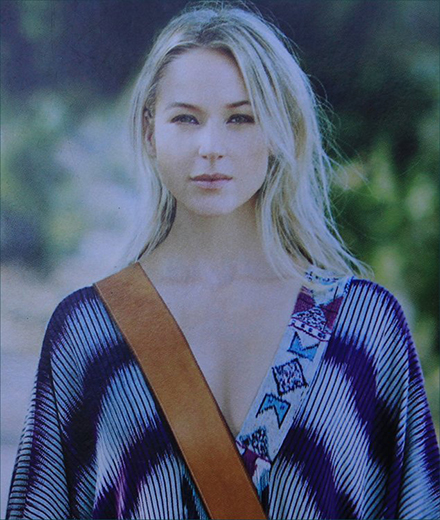 Jewel from her "Picking Up the Pieces" CD

Jewel's "Picking Up the Pieces" Tour, showcased March 19, 2016 at Durham's Carolina Theater, is ancillary to her recent autobiography, "Never Broken" (from her classic anthem "Hands"), which is at the nexus of her every one woman show (just Jewel and her guitars); it is her all-consuming theme projected incredibly well, her life as a poetic masterpiece.

Poetic to the point of pretentious reflection projected upon a crowd of total strangers ... or were we? Some possibly, most were longtime accomplices to Jewel's soulful renderings, her willing auditory muse, but, by the end of the evening, her receptive audience within this charming acoustically perfect theater were irrevocably mesmerized. Jewel, as a musical artist is mesmerizing; and, remarkably, her self-proclaimed "feminist" message, or, rather, her incomparable spirit "is never broken" - not this night.

And, that is her willful purpose: to project the incredible, the fantastic portable pieces of her life. Pieces segregated, well embellished, and then remixed into a poetic soup to be strewn publicly and exposed, vicariously understood, which is the art of it. Jewel, one of the most remarkable pure vocalists of a generation, is, moreover, a poignant communicator through verse, and now prose, which laid bare the hard-scrabbled beginnings of her extraordinary life as a successful artist - singer, songwriter, poet and author.

Jewel, at her spiritual core, is an artist. As an artist, she, foremost, endeavors to communicate by: verse, melody, her original voice, and her sheer force of will. Now, with her autobiography,"Never Broken: Songs Are Only Half The Story", complete in all its revealing glory, Jewel communicates by her recorded spoken word, which illuminates the onset of her set of songs for the evening. This is played over the audio system, and is laced throughout her older and newest melodies, and within the composition of her extra-personal monologue.

Here in the full shadow of Jewel's melodic expression of her abject vulnerable past, I almost feel as if I know the history of her sweet life as I do my own, and maybe more than those of my 3 lovely daughters. They don't tell me everything; I feel that Jewel possibly did.

Not only in her many spoken words, but in her poetic renderings of the life she well knows to express, Jewel laid bare her spirit as well as her past: An impoverished childhood in Homer, Alaska as the daughter of Lenedra Jewel and "Atz" Kilcher; her mother abandoned the family when Jewel was 8; sang in local bars with her father, Atz, until she left Alaska for Interlochen Arts Academy in Interlochen, Michigan, on a scholarship; when 18, with her high school diploma from Interlochen, Jewel lived in San Diego, sought menial work, and lost her job due to refusing the sexual advances of her unscrupulous boss, eventually, making her homeless. While homeless in San Diego, and living out of her Van, Jewel almost dies of infected kidneys when she is turned away from the treatment, and all this adversity while at the delicate age of 18 years.

From the resistance of adversity, rarely, but, on occasion, comes the proverbial living pearl of perfect beauty. Jewel Kilcher wrote her first song, "Who Will Save Your Soul", in 1990, and still one of her most popular songs, when she was sixteen. At the tender age of 18 years, while most teenagers are jousting opponents for the better prom dates, Jewel lies gravely ill in the the backseat of her car in a San Diego hospital parking lot. If not for the Good Samaritan kindness of a hospital doctor, who came to the sick teenager's aid, prescribing and providing the budding poet with curing antibiotics, Jewel may have died unnoticed in abject anonymity. From her experience with this warranted act of kindness, from her ascribed "angel", she wrote her unforgettable anthem "Hands", remarkably, at 18 years old, in 1992.

Beautifully arranged Christmas version with full orchestra. I still rather appreciate the Jewel /one guitar version that I witnessed live, and only about 7 rows from center stage on March 19, 2016.


I mention all of this Jewel Kilcher history for two reasons: 1) This spoken knowledge, via intermittent monologue, was a major component of Jewel's show at the Carolina Theater; 2) It would be false to assume that Jewel's unique life experiences were not the prime influence in her every creative musical endeavor.

On this cold, rainy March night in this Bull Durham town, the totality of Jewel's creative musical endeavor could best be represented by her evening's playlist here below:

performed by, and provided by Jewel


Somewhere Over the Rainbow
- greetings and chat
Without You By My Side
- monologue
Hands
Plain Jane
- monologue
My Father's Daughter
Angel Standing By
Morning Song
Leave Yourself At The Door (poetry reading)
Here When Gone
Everything Breaks
Standing Still
Intuition
- chat
Nicotine Love
You Were Meant For Me
Foolish Games
Goodbye Alice in Wonderland
Listen (poetry reading)
Mercy
- monologue
Who Will Save Your Soul
encore: Chime Bells


And what an evening of musical masterpieces, interlaced within Jewel's aforementioned theme of keeping it real and true, with words which honestly describe the paradigm that is the totality of Jewel Kilcher. In this and many other essential pieces of this night's performance, it was an extra-one-woman-show.

It was a one-woman musical presentation where Jewel walks in from the stage shadows to the soft light of center stage to sing, a capella, Somewhere Over the Rainbow, which is the beginning of every Jewel show, and for some time now. My guess is: This is Jewel's process of flexing her voice to sing the remaining 18 songs of her set, in perfect tone, in perfect pitch.

This version best represents what I heard that Saturday night in Durham. Pitch perfect, with all of Jewel's range and vocal power.


After that auspicious introduction to the probable evening that lain ahead, with Jewel's melodic company, the crowd settled in for more. That is where jewel's monologue began, and Jewel is pre-conditioned to talk. In fact, if Jewel elected to leave her perfect vocation, she would make an outstanding politician; she is an incredibly gifted, and naturally relaxed speaker. Her spoken words is where I derived 90% of this data in this report, the rest I researched just to fill in the gaps. Still, most in the crowd came for the playlist, and, intuitively sensing this, Jewel remarked while recounting her varied, and unusual life events: 'I promise; I will soon be singing.'

After the Jewel poem, "Without You by My Side", she well explained her next song "Plain Jane", from "Picking Up the Pieces, which contrasted herself as someone who arrived unremarkably dressed to the Upper East Side party (and was told so), with, moreover, the New York Fashion elites in the bargain, and the contrasts were a wide chasm in originality, or, the lack thereof. Jewel duly noted their institutional hypocrisy: "You make side comments in private ... But in public, you're fashionably green." And then to remind these superficial, pretentious people: "Beneath painted layers you're afraid they'll see what's really in your heart." 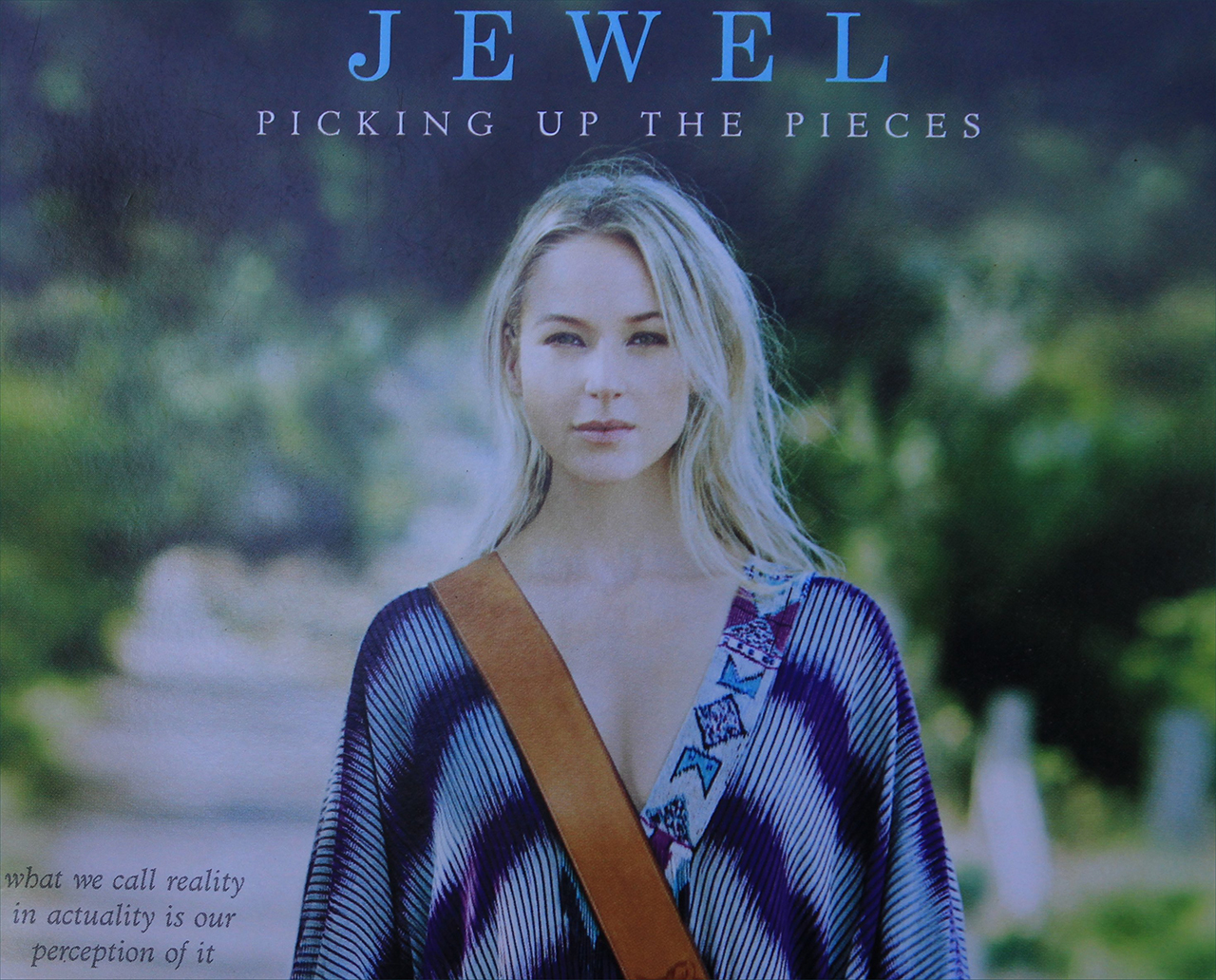 Both sides of the "Picking Up the Pieces" compact disc.    Click image to expand.
Go Back