Does The United States Still Exist? by Paul Craig Roberts 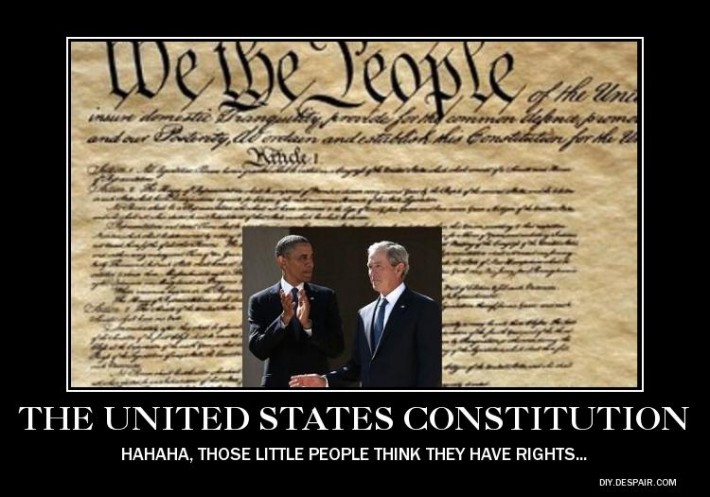 
An address delivered to the Libertarian Party of Florida on March 23, 2016 in Destin, Florida

Does the Constitution still exist? Let us examine the document and come to a conclusion.

The Constitution consists of a description of a republic with three independent branches, legislative, executive, and judicial, each with its own powers, and the Bill of Rights incorporated as constitutional amendments. The Bill of Rights describes the civil liberties of citizens that cannot be violated by the government.

The Bill of Rights protects citizens from the government by making law a shield of the people rather than a weapon in the hands of the government.

The First Amendment protects the freedom of speech, the press, and assembly or public protest.

The Second Amendment gives the people the right "to keep and bear arms."

The Third Amendment has to do with quartering of soldiers on civilians, a large complaint against King George III, but not a practice of present-day armies.

The Fourth Amendment grants "the right of the people to be secure in their persons, houses, papers, and effects, against unreasonable searches and seizures" and prevents the issue of warrants except "upon probable cause, supported by oath or affirmation, and particularly describing the place to be searched, and the persons or things to be seized." The Fourth Amendment prevents police and prosecutors from going on "fishing expeditions" in an effort to find some offense with which to charge a targeted individual.

The Fifth Amendment prohibits double jeopardy, self-incrimination, the taking of life, liberty, or property without due process and the prohibition of seizing property without just compensation.

The Sixth Amendment guarantees speedy and public trial, requires that a defendent be informed of the charge against him and to be confronted with the witnesses, to present witnesses in his favor, and to have the assistance of an attorney.

The Seventh Amendment gives the right of trial by jury to civil suits.

The Ninth Amendment says that the enumeration of certain rights in the Constitution does not deny or disparage others retained by the people. In other words, people have rights in addition to the those listed in the proscriptions against the government's use of abusive power.

The Tenth Amendment reserves the rights not delegated to the federal government to the states.

The Tenth Amendment is a dead letter amendment. The Third Amendment protects against an abandoned abusive practice of government. The Seventh Amendment is still relevant as it allows damages in civil suits to be determined by a jury, once a protection against unfairness and today not always the case.

The other seven amendments comprise the major protections of civil liberty. I will examine them in turn, but first let's look at Section 1 and Section 8 of Article I. These two articles describe the major powers of Congress, and both articles have been breached. The Constitution's grant of "all legislative powers" to Congress has been overturned by executive orders and signing statements. The president can use executive orders to legislate, and he can use signing statements to render sections of laws passed by Congress and signed by the president into non-enforced status. Legislative authority has also been lost by delegating to executive branch officials the power to write the regulations that implement the laws that are passed. The right that Section 8 gives to Congress to declare war has been usurped by the executive branch. Thus, major powers given to Congress have been lost to the executive branch.

The First Amendment has been compromised by executive branch claims of "national security" and by extensive classification. Whistleblowers are relentlessly prosecuted despite federal laws protecting them. The right of assembly and public protest are overturned by arrests, tear gas, clubs, rubber bullets, water cannons, and jail terms. Free speech is also limited by political correctness and taboo topics. Dissent shows signs of gradually becoming criminalized.

The Fourth Amendment is a dead letter amendment. In its place we have warrantless searches, SWAT team home invasions, strip and cavity searches, warrantless seizures of computers and cell phones, and the loss of all privacy to warrantless universal spying.

The Fifth Amendment is a dead letter amendment. The criminal justice system relies on self-incrimination as plea bargains are self-incrimination produced by psychological torture, and plea bargains are the basis of conviction in 97% of all felony cases. Moreover, physical torture is a feature of the "war on terror" despite its illegality under both US statute and international law and is also experienced by inmates in the US prison system.

The Fifth Amendment's protection against deprivation of life, liberty, and property without due process of law has been lost to indefinite detention, executive assassination, and property takings without compensation. The Racketer Influenced Corrupt Organizations Act (RICO) passed in 1970. The act permits asset freezes, which are takings. The Comprehensive Forfeiture Act passed in 1984 and permits police to confiscate property on "probable cause," which often means merely the presence of cash.

The Sixth Amendment is a dead letter amendment. Prosecutors routinely withhold exculpatory evidence, and judges at prosecutors' requests have limited attorneys' ability to defend clients.The "war on terror" has introduced secret evidence and secret witnesses, making it impossible for a defendant and his attorney to defend against the evidence.

The Eighth Amendment's prohibition of excessive bail and torture are routinely violated. It is another dead letter amendment.

It is paradoxical that every civil liberty in the Bill of Rights has been lost to a police state except for the Second Amendment, the gun rights of citizens. An armed citizenry is inconsistent with a police state, which the US now is.

Other aspects of our legal protections have been overturned, such as the long standing rule that crime requires intent. William Blackstone wrote: "An unwarrantable act without a vicious will is no crime at all." But today we have crimes without intent. You can commit a crime and not even know it. See for example, Harvey Silverglate, Three Felonies A Day: How the Feds Target the Innocent.

Attorney-client privilege has been lost. The indictment, prosecution, and imprisonment of defense attorney Lynne Stewart is a good example. The DOJ prevailed on her to defend a blind Muslim regarded by the DOJ as a "terrorist." She was informed that "special administrative measures" had been applied to her client. She received a letter from the federal prosecutor informing her that she and her client would not be permitted attorney-client privilege, and that she was required to permit the government to listen to her conversations with her client. She was told that she could not carry any communications from her client to the outside world. She regarded all this as illegal nonsense and proceeded to defend her client in accordance with attorney-client privilege. Lynne Stewart was convicted of violating a letter written by a prosecutor as if the prosecutor's letter were a law passed by Congress and present in the US code. Based on a prosecutor's letter, Lynne Stewart was sentenced to prison. No law exists that upholds her imprisonment.

Our civil liberties are often said to be "natural rights" to which we are entitled. However, in historical fact civil liberty is a human achievement that required centuries of struggle. The long struggle for accountable law that culminated in the Glorious Revolution in England in the late 17th century can be traced back to Alfred the Great's codification of English common law in the 9th century and to the Magna Carta in the early 13th century. Instead of issuing kingly edicts, Alfred based law on the traditional customs and behavior of the people. The Glorious Revolution established the supremacy of the people over the law and held the king and government accountable to law. The United States and other former British colonies inherited this accomplishment, an accomplishment that makes law a shield of the people and not a weapon in the hands of the state.

Today law as a shield of the people has been lost. The loss was gradual over time and culminated in the George W. Bush and Obama regime assaults on habeas corpus and due process. Lawrence Stratton and I explain how the law was lost in our book, The Tyranny of Good Intentions. Beginning with Jeremy Bentham in the late 18th century, liberals saw the protective shield of law as a constraint on the government's ability to do good. Bentham redefined liberty as the freedom of government from restraint, not the freedom of people from government. Bentham's influence grew over time until in our own day, to use the words of Sir Thomas More in A man for All Seasons, the law was cut down so as to better chase after devils.

We cut down the law so that we could better chase after the Mafia.

We cut down the law so that we could better chase after drug users.

We cut down the law so that we could better chase after child abusers.

We cut down the law so that we could better chase after "terrorists."

We cut down the law so that we could better chase after whistleblowers.

We cut down the law so that we could better cover up the government's crimes.

Today the law is cut down. Any one of us can be arrested on bogus charges and be helpless to do anything about it.

There is very little concern in legal circles about this. The American Civil Liberties Union (ACLU) does attempt to defend civil liberty. However, just as often the ACLU is not defending the civil liberties in the Bill of Rights that protect us from the abuse of government power, but newly invented "civil rights" that are not in the Constitution, such as "abortion rights," the right to homosexual marriage, and rights to preferential treatment for preferred minorities.

An attack on abortion rights, for example, produces a far greater outcry and resistance than the successful attack on habeas corpus and due process. President Obama was able to declare his power to execute citizens by executive branch decision alone without due process and conviction in court, and it produced barely audible protest.

Historically, a government that can, without due process, throw a citizen into a dungeon or summarily execute him is considered to be a tyranny, not a democracy. By any historical definition, the United States today is a tyranny.

This article was reposted with permission from Dr. Roberts.

Dr. Paul Craig Roberts was Assistant Secretary of the Treasury for Economic Policy and associate editor of the Wall Street Journal. He was columnist for Business Week, Scripps Howard News Service, and Creators Syndicate. He has had many university appointments. His internet columns have attracted a worldwide following. Roberts' latest books are The Failure of Laissez Faire Capitalism and Economic Dissolution of the West, How America Was Lost, and The Neoconservative Threat to World Order. Check out his website - http://www.paulcraigroberts.org/
Go Back