How to win a presidential Election | Beaufort County Now | As seen through the eyes of an unbiased MSNBC show, the election is a all about who you don't like. | Morning Joe, MSNBC, Trump, Hillary, New York crowd, liberal commentators, Bernie, establishment Republicans

How to win a presidential Election

Login to Send a Private Message to Bobby Tony
While I was getting my required far left fix (three times a week) this morning, I heard a quote on MSNBC about the election. Apparently during the pre-production meeting they decided that today they would focus on the Never Trump or Hillary theme. The whole broadcast was various good liberal commentators and some pseudo-conservative ones restating the premise that nobody likes Trump and some don't like Hillary. All this was the result of a recent poll or survey that indicated that about 30% of each candidate's supporters were anti one or the other and that was the main reason they had such strong support.

The same theme was being covered on both CNN and Fox news. It illustrated to me that all the New York crowd (I did not say Values) attend the same parties and adhere to the same group think.

I doubt this premise because I think that Bernie and Trump supporters are true believers. Hillary's supporters are the establishment Democrats, many of which would privately think that there were better choices than her but they are stuck with her. The establishment Republicans are confused because they don't know what to do about this upstart conservative movement that started forty years or so ago.

In my view both parties shot themselves in the foot or head if you will. Trump was not a Republican and Bernie was not a Democrat. For whatever reason both parties allowed a candidate that was a cursory affiliate of the party at best. After that, they lost control over the process and the voters asserted their power using the very party apparatus set up to prevent such things from happening. As I have said before the two-party system is not about governing but winning and perpetuating the parties. Whatever happens, I will bet you will see drastic changes in the primary system in future elections.

I can't say that I disagree with the general idea of negative voting, but it is clear to me that most Americans are fed up with the status quo and have decided to take a chance on another alternative to the way things have always been done. Early in this primary cycle, I was of the same opinion as many. I was amazed why anyone would support either Trump or Hillary but I have since 'moderated' (Like that Tmac?) my position because of being on the wrong side of the debate has left me with little choice. After all was said and done, the following quote came out which I think may hold a kernel of truth.

"The best way to get elected is to run against another un-electable person". (Source Morning Joe MSNBC)

That explains the 2016 presidential race in a nutshell. But I might add that is all based on polls which as we all know are always correct. Ask Harry Truman, he knows. He was plain spoken and given to some "colorful" language and it struck a nerve with the American public.

My favorite Truman story:
"There's a story going around about me these days. It says that some old party hen is supposed to have cornered Bess at some party, and said, "Mrs. Truman, isn't there anything you can do to get the President to stop using the word 'manure'?" And Bess is supposed to have replied, "It took me forty years to get him to use that word!" Harry Truman 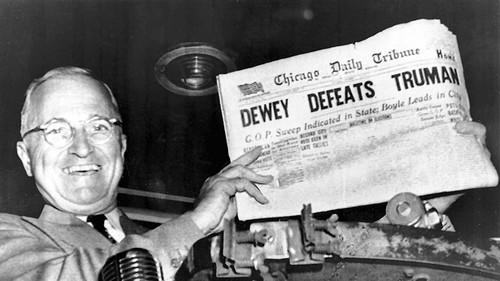 When do you think the parties and media will learn that the people just can't be trusted to select their leaders by vote. Out current POTUS has expanded the power of the executive branch but he is not the only one to have done this.