Raleigh, N.C. - Governor Pat McCrory provided an update on the state's response to three States of Emergency currently in effect regarding flooding in northeastern North Carolina, civil unrest in Charlotte and the statewide fuel shortage.

"Needless to say, over the past week North Carolina has faced three extremely difficult situations," said Governor McCrory. "Today, I want to assure our citizens that North Carolina is addressing each of these situations head on. We have been prepared and I am proud of the collaboration between our law enforcement and our emergency response teams to protect the citizens of our great state." 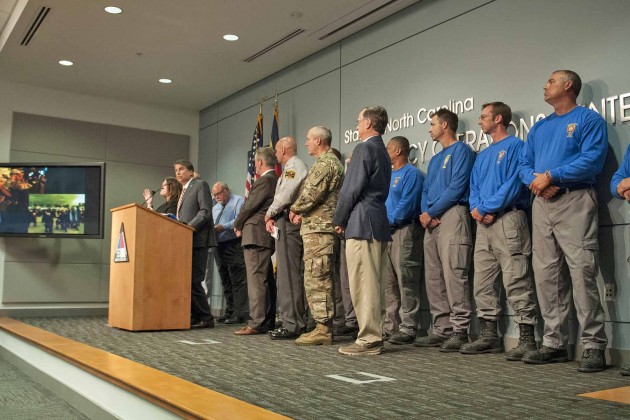 The state has deployed swift water rescue teams to help people stranded in floodwaters, and have rescued 138 people to date from homes and vehicles, including 61 residents and staff from a nursing home in Windsor. Earlier today the governor met with the Greensboro swift water rescue team that was on the ground yesterday and thanked them for their service.

State environmental officials are continuing to monitor conditions at public water systems, animal operations and water treatment plants. The governor is also monitoring the impact of the storms on the agricultural industry.

"It is a team effort and I am proud of how the community and our state has handled this national issue focused on North Carolina," said Governor McCrory. "I am especially proud that some of the most memorable images from last night were of peaceful protesters hugging and shaking hands with our National Guard members and law enforcement. This is the Charlotte and North Carolina I know."

The National Guard and State Highway Patrol will remain in Charlotte through Sunday to be available to help protect infrastructure and support local law enforcement as needed.

Governor McCrory confirmed that the State Bureau of Investigation has initiated an independent investigation into the officer-involved shooting.

The fuel shortage in North Carolina is now in its second week, and fortunately things are looking more optimistic now than they were a week ago. The Wilmington distribution terminal at the port has been operating around the clock at nearly four times the normal production capacity to help offset the shortage.

On Tuesday, Governor McCrory announced that the Colonial Pipeline bypass was completed. Delivery amounts are expected to continue to increase in the coming days.

The governor thanked North Carolinians for heeding calls to conserve fuel and encouraged people to continue until supplies return to normal.