As Governor McCrory and Roy Cooper Prepare to Debate on WRAL, a Primer on WRAL's Political Contributions to Cooper | Beaufort County Now | Ahead of tonight's televised gubernatorial debate on WRAL, Pat McCrory's campaign is drawing attention to the network's financial support of Roy Cooper's campaign.

As Governor McCrory and Roy Cooper Prepare to Debate on WRAL, a Primer on WRAL's Political Contributions to Cooper

Since Cooper's first bid for attorney general 16 years ago, WRAL's owner and family have contributed nearly $37,000 to Cooper's campaigns. During his campaign for governor, they have directly contributed $32,700 and even hosted fundraisers for Roy Cooper.

As CBC's president and CEO, Goodmon has been directly involved in Cooper's campaign, co-hosting a private fundraiser for Cooper alongside his wife. (Cooper for North Carolina fundraiser, 6/9/2016) 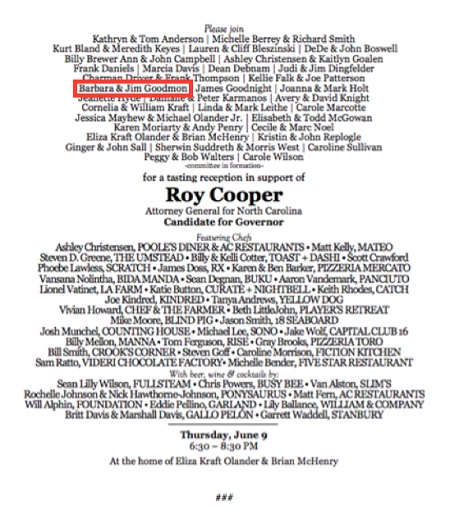 
WRAL reported on the leaked memo and describes Blueprint NC as affiliating with "left-of-center" groups" on its list of nonprofits "shaping political conversation," but failed to list the A.J. Fletcher Foundation as one of them, or note WRAL's connections to the organization. (Mark Binker, "Liberal groups lay out blueprint for attack on state leaders," WRAL, 2/21/2013; "Profiles: NC policy groups shaping political conversation," WRAL)

The Goodmons have contributed another $22,000 to other Democrats this election cycle, including Deborah Ross and Hillary Clinton. (Center for Responsive Politics)

WRAL isn't the only news organization contributing to Democrats. The Center for Public Integrity found that of the $396,000 members of the media contributed to the campaigns of the two presidential candidates: