Updated: Fascism is a Word that is Wrongly Tossed Around | Eastern North Carolina Now | Even the current accepted definition of Fascism is partially wrong describing Fascists as "right-wing", who despise liberalism, Marxism and anarchism, and even cite these "right-wingers" as "Authoritarians".

Updated: Fascism is a Word that is Wrongly Tossed Around

Login to Send a Private Message to Stan Deatherage
In America, the problem is that most people, even most learned people who rely on the word Fascist in their basic political discourse, know little of the word's core definition, regardless of their level of education.

Incredibly, the current accepted definition of Fascism is partially flawed, describing Fascists as "right-wing", who despise "liberalism, "Marxism and anarchism", and even cite these "right-wingers" as "Authoritarians", which is the truest connotation of Fascism; however, "right-wingers" have no lock on the worship of Authority. Regardless of Liberals' profound misunderstandings, with our historical perspective of Fascists and Fascism here in modern times, beginning in the 20 century, there is no excuse to not know the look of Fascism, especially if one uses the word in great abundance as an epithet, even while debating large Liberal issues.

Within the parameters of what is American here in these Modern times on the subject of what is Fascist, what is Fascism, I am more right in my understanding of any acceptable definition written by a Liberals, and, moreover, I understand this political epithet more than the Liberals that love to throw the word around so casually, without significant forethought of its meaning.

At the heart of my "right" argument is the simple premise that Fascists, at their core, are Authoritarians, or, conversely, those that crave the iron fist of Authority to which they surrender their lives unto its crushing weight. Wrongly, the accepted definition by Liberals of Fascism accuses the "Right-wing", not "liberalism, Marxism and anarchism" as the major condition of the "Authoritarianism" of Fascism - that which takes large sums from one to give to another - to keep Liberals in power.

Years ago, as a multi-term Conservative (a.k.a. "right-wing") county commissioner (I have mentioned this before), my core politics were evaluated by the UNC School of Government - no bastion of the "Right-wing" - through an extensive testing, a political catechism of sorts. In my years as a Conservative county commissioner, no one ever questioned my credentials as a Conservative; I reckon I was bona fide. So, did the UNC School of Government get it wrong when they evaluated me, at my political core, and determined that I was the direct antithesis of an Authoritarian? Me, Stan Deatherage, the "Right-wing" Conservative?

So, who is right: the UNC School Government, with Conservative County Commissioner Stan Deatherage as its perfect "petri dish", or the Liberals writing inaccurate definitions of Fascism, and throwing the word around that they can't etymologically fathom?

Remarkably, the word Fascist, and the act of Fascism is a modern political phenomenon, just beginning in Italy about 90 years ago, with the advent of Benito Mussolini. One would think that Liberals struggling to own the word Fascist, as an epithet, would have done more in an academic sense to understand the word, then use it properly.

Accordingly, I write this in light of two pieces of news last week: one large, one very small, so, let's begin with the very small. Last week a disgruntled Liberal; an Authoritarian of sorts, and a L. Hillary supporter, who runs a business regarding the nebulous Search Engine Optimization (SEO) practice, admonished all that voted for Donald Trump or may appear to have voted for Donald Trump, that he would no longer do business with them. His name is CEO Mathew Blanchard of 1st in SEO.

The intolerant, pathetically smug Mathew Blanchard, a purveyor of the hocus /pocus business of SEO, which was invented to fool Search Engines and those customers that would also be fooled by the SEO gimmick, was the perfect foil to adamantly work the divisive message of the Left. However, I do not admonish Mr. Blanchard for his gimmicky business, I admonish him for freely throwing the word Fascist and Fascism around, and even misrepresenting the history of it. SEO Purveyor Blanchard claimed that 'Trump was a rightfully elected Fascist just as Adolf Hitler was', which is wrong. Hitler was not rightfully elected in 1932, and it gets complicated how he consolidated power in 1933, so let's understand that for what it is - Blanchard's meaningless Leftist blather to make a Leftist point, as if he actually knew what he was talking about, which he did not.

Instead, Mr. Blanchard misused his time on national television to further meltdown within his "Basket of Deplorables" moment, and a perceptively quick Tucker Carlson destroyed this SEO Fool for his hypocrisy in the intolerance of others extensively unlike himself, of which, hopefully, there are many. 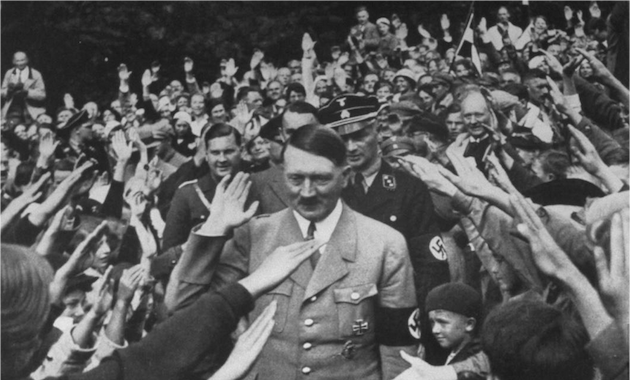 The early days of Adolf Hitler's evil reign, when his National Socialist German Workers' Party (Nazi) consolidated its power: Above.


The interview between the aforementioned Mathew Blanchard and Tucker Carlson, who made great subtle fun of this liberal fool: Below.

This SEO Fool, Mathew Blanchard, was not created in a vacuum. He enjoys a vast support group that reaffirms his oblivious stupidity, his overt prejudice, and intolerance, revealing there must be a concerted effort by committed Liberals to keep their "Sheople" intellectually malleable for their needs. Marxist pioneer Vladimir Lenin referred to this management of these low-information types as "useful idiots".


I am updating this post to include this video from Louder With Crowder. Steven Crowder is an excellent spokesman for truth, and very entertaining as well. If there is a theme to this video by Crowder, it would be, 'if you're going to throw stones, don't live in a glass house': Below.


Useful Idiot Mathew Blanchard well manifests how a bold Leftist spokesman does step to the fore to venomously speak for the other less bold liberal "Sheople", who either don't know what they speak of, or, are indoctrinated to ignorance through far too many years of "higher" education by stridently ideological professors; most also educated far beyond their ability of significant comprehension.

As I pivot from the Why and the How of such ignorance, I bring to the fore the second much larger piece of news - the much anticipated death last week of Cuba's Dictator Fidel Castro, a strongman, who many "Marxists" and "Anarchists" well admire.

Why was a "Marxist" Communist dictator: who ruled as a supreme "Authoritarian", who murdered and imprisoned tens of thousands of his political opponents and even like minded rivals, so revered by Liberals?

Continuing that line of thought, how is it that Conservatives, decried as "right-wing" American Fascists, construed as so dysfunctional that Liberal zealots, like the aforementioned Blanchard, would discriminate so vehemently against Republicans or Conservatives, who would support someone other than L. Hillary Clinton; a deeply flawed American politician?

The answer: The Democrat party is now the party that has been hijacked by ultra Liberals and Socialists, and, taking a page out of the political playbook of the ultra Liberals /closet Communists of the 1930s /40s /50's, who revered the political machinations of Joseph Stalin and Mao Tse-tung, are now pushing America hard and fast toward the stance of a full Socialist government. To accomplish that feat of crushing Capitalism for the benefit of the forced sharing other people's property, "Authoritarianism" will need to play a major role. For Socialists like Hussein Obama, the Alinsky method, of 'the end justifying means' is always a viable option.

In the real world that is at the core of Capitalism, one cannot forcibly take the property of others without first limiting certain liberties, thereby, plowing the path to take that which is owned by the productive to redistribute to the supporters of authoritative Socialism. That is the way it works, even to the extent that the seizing of taxes, by legislative fiat in today's Capitalistic America, is termed Police Power. Thankfully, democratic Capitalist will call it for what it is.

You will not get that thread of honesty from Liberal /Socialist zealots, who toss around their unknowable word of Fascist like so much confetti. What you will get from this brand of Liberal is stupid talk, while attempting to sound smart, about a historical perspective that is far beyond their level of comprehension, as it also is unknowable to other like minded individuals that are no smarter.

Ironically, this bubble knowledge, which is spread quickly through Social Media or Collegiate indoctrination by some members of the Education Industry, retards many young adults from understanding the real history of this real World. These nubile Liberals are not fathoming that words have power, and they should know the meaning of what they say long before they proffer it. Otherwise, they need to stay quiet, or thought a fool, like social gadfly Miley Cyrus or the aforementioned Mathew Blanchard.

If I am wrong here, which I am not, please show me how Conservative "right-winger" Ronald Reagan was an Authoritative Fascist, and, alternately, Authoritative Marxists Joseph Stalin and Mao Mao Tse-tung were not. This philosophical construct fits within the definition of Fascists, and regardless of how Liberals spin words about a subject that they have little knowledge of - Fascism - there is an ongoing truth that Libertarian /Conservatives in today's America adhere to a political philosophy of smaller, more effective government, more freedom, more liberty, thereby, less "Authoritarianism", and, therefore, no Fascism.

We'll leave the world of Fascism to the hypocritical Socialist Left to grapple with.