The Last Waltz | Beaufort County Now | The Last Waltz is arguably Oscar Winner Martin Scorsese's best film as it documents The Band as they bid fairwell to an eclectic collection of their most adoring fans.

“I Got a Tombstone Head and a Graveyard Mind, I Turned 41, I Don’t Mind Dying: Who do you Love?”

Ronnie Hawkins, one of The Band’s earliest front-men when they were known as The Hawks, in the early 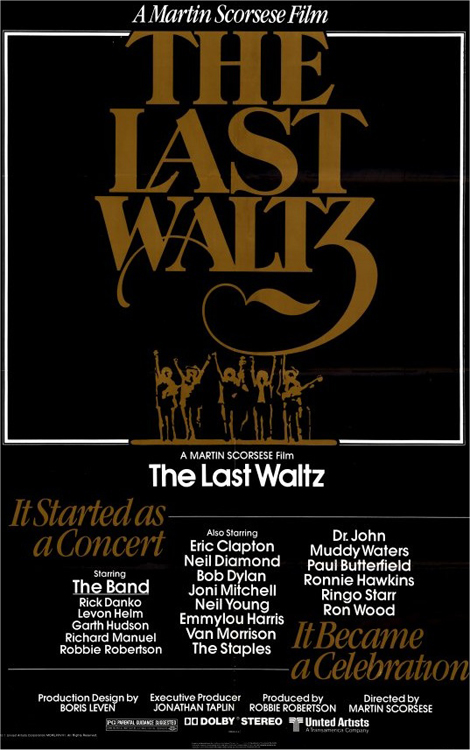 1960’s, before they were known as The Band, sang these words as a visiting artist in the rhythm and blues anthem, “Who Do You Love?”, in Martin Scorsese’s epic documentary, “The Last Waltz.” The film celebrates the music and the art of the legendary musicians, who performed their farewell concert at the Winterland in San Francisco on Thanksgiving Day, 1976.

The Concert, held at the former skating rink Winterland, was produced by concert impresario Bill Graham, which was true to its holiday trappings by providing a turkey dinner to all attendees beginning at 5:00 pm, with a ballroom dance succeeding the traditional meal. The Band took the stage promptly at 9:00 pm with their performance of “Up On Cripple Creek.” The Band then played until after 2:00 am, with an assimilation of some of the best musicians of their day filling in the gaps, with some of the best tunes from The Band’s era. It was a raucous fitting end to a “band” that was one of the best of that generation … and let’s be clear about this one thing: That was the best generation for music since the great classical periods of Bach and Beethoven.

Hyperbole or truth - you be the judge - but first, you need to do some research. I suggest you begin with the “The Last 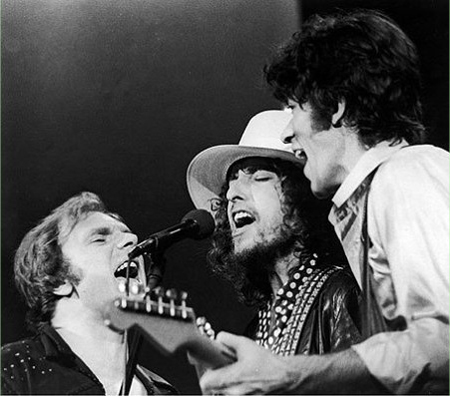 Waltz.” Arguably, it is Martin Scorsese’s best film of the lot of his many excellent films - he won the Oscar as Best Director for “The Departed.”

Martin Scorsese, who is known for his rough cut cinematography, as in “Mean Streets,” went to special lengths to shoot a rock concert that lasted well over five hours. He used veteran cinematographers: Michael Chapman, Vilmos Zsigmond and László Kovács to produce the finest filmed concert ever made. Martin Scorsese story-boarded the entire concert schedule of songs, with the respective guest artists, and while it was impossible to perfectly capture the entire concert on celluloid as meticulously planned, “The Last Waltz” is the best shot concert footage I have ever witnessed.

The careful cropping and framing of each scene suggested, visually, the tight bond between band members, which ultimately 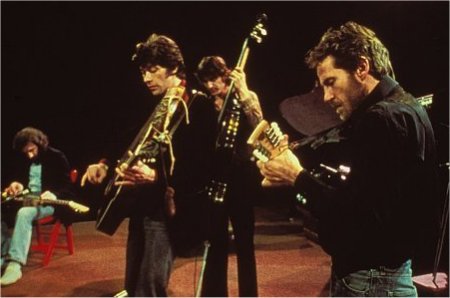 gave The Band one of the tightest sounds in the business. That funked-up blues meets rockabilly sound was their trademark: carefully crafted lyrics about such a variety of subjects, spare guitar solos, rhythmic keyboards spliced into the funk for effect, and the combined vocalization of three unique voices; Richard Manuel, Rick Danko, and the only non Canadian in the bunch, Arkansas native Levon Helm, that took them deep into Rock ’n’ Roll immortality. Watching Bassist Rick Danko pump his arms as he spastically fingered the fret board to delivered his signature bass-line, as he simultaneously pumped out his accompanying vocals on their classic anthem “Stage Fright” with the original band still intact for the last time, made me say to myself, “thank-you Martin Scorsese for your trouble.” 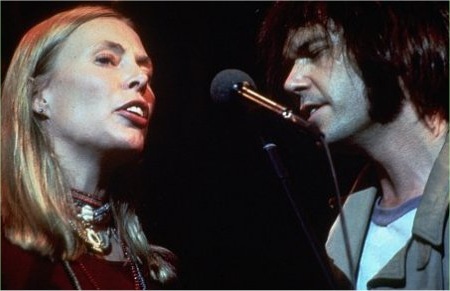 Great Musicians all, but The Band takes no backseat even to this fine group. On Eric Clapton’s “Further on Up the Road,” as “Slowhand” is dead into the song’s initiating guitar rift, his guitar strap breaks, and he calls for a break, but The Band’s lead guitarist Robbie Roberson continues with Clapton’s signature rift unabated, and without pause. Now, no one would ever confuse Roberson’s capable guitar work with the great “Slowhand’s” purposeful rifts, but Robbie continued Clapton’s tune with a smile on his face, just waiting for “Slowhand” to pick it back up, with the repaired guitar strap. And there was Robbie Robertson, The Band’s primary tunesmith, who purposefully did not write guitar solos into his classic songs, playing Clapton’s rift note for note, without missing a beat. Now that’s what I would refer to as an understated talent.

Scorsese quickly understood that Robbie Robertson, who played lead guitar and did harmonizing vocals, was the reserved impetus behind these fine musicians'respectable success. Robbie Roberson shared most of the songwriting duties with Pianist Richard Manuel on The Band’s inaugural album, “Music from the Big Pink,” but wrote almost all of their classic tunes from that point forward, when Richard was having trouble contributing as he had in the past. Robbie, along with Levon Helm, who took up acting after The Band split up, were the most articulate members of the group, and it was very apparent in he interview sessions conducted by an unusually fast talking Martin Scorsese.

From these interviews, we were given insights from the a very relaxed group of musicians that not only seemed very comfortable with each other, but very comfortable in their own skin. Vocalist Richard Manuel, who was known for those overreaching falsetto notes layered in the harmonization in toto, and Robbie Robertson explained the history of how they became identified as The Band: 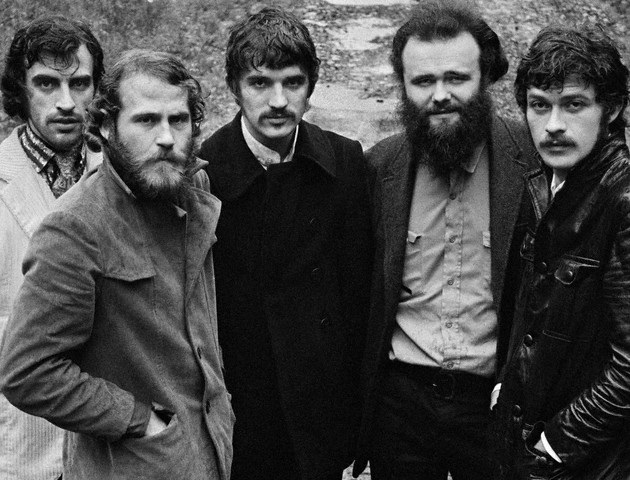 Richard Manuel: “Well, we were The Hawks.”
Robbie Robertson: “And everything was fine, we were sailing along, and all of a sudden, one day The Hawks meant something else altogether.”
Richard Manuel: “And it was right in the middle of that whole psychedelia. Chocolate Subway, Marshmallow Overcoat. Those kind of names, you know?”
Robbie Robertson: “When we were working with Bob Dylan and we moved to Woodstock, everybody referred to us as the band. He called us the band, our friends called us the band, our neighbors called us the band.”

Also covered in the interview was Robbie’s remembrances of how each member of The Band, who had been playing together for some time as The Hawks, had to “contribute 10.00 apiece to the classically trained new band member multi-instrumentalist Garth Hudson for music lessons, so Garth’s parents would be comfortable with his joining the predominately unknown band.”

Unknown they were no more, and Thanksgiving night, 1976, at the Winterland, The Band celebrated that fact with over 5,000 of their good friends and devoted fans. It was their night and they 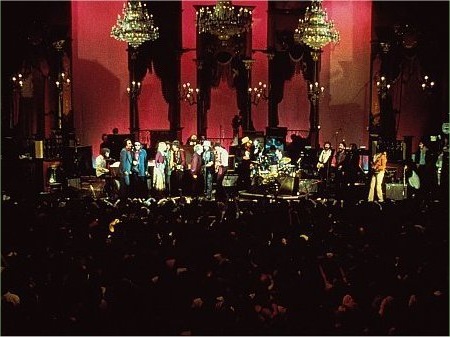 performed admirably their list of classics including “The Night They Drove Ole Dixie Down,” complete with horn section, was Levon Helm’s triumph as his soulful vocals really punched this tight production right down to its mournful end. Similarly Levon’s trademark vocals are forever unmatched vocals, with harmonizing vocals from the Staple Singers, on “The Weight,” one of three songs performed in a recording studio for “The Last Waltz.”

The two others recorded in the studio were Evangeline with Emmylou Harris, and Robbie Roberson’s composition of “Theme from The Last Waltz” to begin and end this classic These three studio numbers are interspersed perfectly in with the live concert footage and only enhance the total effect of film.

Ronnie Hawkins’ line, “I Got a Tombstone Head and a Graveyard Mind, I Turned 41, I Don’t Mind Dying: Who do you Love?” from the concert’s opening song, “Who Do You Love?”, well symbolizes the soul of that era’s Rock ‘n’ Roll performers as they traveled “the road,” and shook the twin foundations respectively of what is acceptable music and thereby society as a whole.

31 years have past since “The Last Waltz” and 33 years have past since the memorable concert. Richard Manuel died in 1986 and Rick Danko died in 1999. They, like the original The Band and their inspirational compositions, will be missed by we, who lived in those times and loved their soulful melodies. Martin Scorsese deserves a huge thank-you for his classic rendition of a group of young men, who became one of the ten greatest performing acts of the twentieth century.

You need to see this film if you have never had the opportunity. It is only 117 minutes of runtime. You should educate yourself to the past so you might gain some perspective as to the future. See the "The Last Waltz." Get to know The Band.

Now that we have the introductions out of the way, and per chance: If you got your funk bone initiated, you must see the next short videos, compliments of our friends at youtube.


This is the is a fair representation of how the film began with the last song of the concert, Don't Do It: Below.


Two of The Band's early classics: Above and below.

Just one more from Northern Lights - Southern Cross released in 1975 shortly before the The Last Waltz farewell concert.


The Band's near holy anthem of a terrible time, recorded well for all posterity: Below.