Published: Monday, March 20th, 2017 @ 8:58 pm
By: John Locke Foundation   ( More Entries )
Publisher's note: The author of this post is Dan Way, who is an associate editor for the Carolina Journal, John Hood Publisher.

Tucker and Berger say The Billion Dollar Middle Class Tax Cut Act would not affect the General Assembly's ability to meet teacher pay hikes and other funding commitments already made. Nor would the sales tax base be broadened to offset the costs.

They said previous tax reforms erased budget shortfalls with surpluses, allowed for record increases in education and transportation infrastructure spending, and led to creation of about 535,000 jobs. They expect this new round of tax changes to follow that trajectory. If adopted, this plan would raise the total tax relief since 2011 to $4.5 billion.

"The lower the tax the better on pure liberty grounds. It advances liberty. The more income you can keep the freer you are. That should be our first argument, always," Cordato said.

"We're accomplishing what we need to accomplish in the state, and probably more so, to be quite honest, with all the tax cuts that have been happening. And what we have is year after year multi-hundred-million-dollar revenue surpluses, and we have a $552 million revenue surplus going into this budget cycle," said Donald Bryson, state director for Americans for Prosperity.

"What we need to continue to do is give the money back in a good, reasoned way, but at the same time hold the line on spending, which is what this General Assembly is doing, and why we have a revenue surplus," Bryson said.

"The plan will decrease the personal income tax from 5.499 to 5.35 (percent) and that will be one of the lowest in the Southeast, and it will help working families and small businesses, all those S-Corps who file and have to pay personal income tax," Tucker said. An S corporation is a business that is not taxed. Its profits and losses pass on to shareholders' personal tax returns. 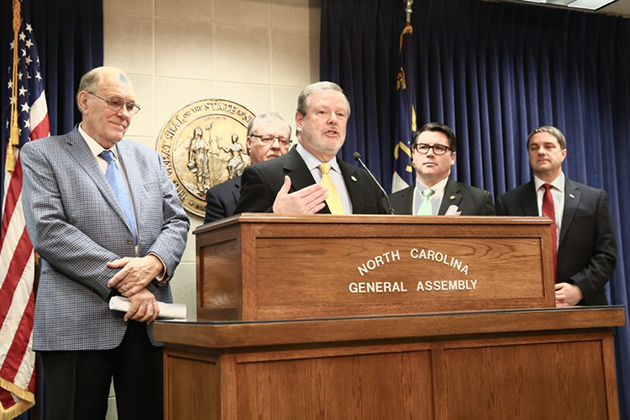 
The plan increases the standard tax deduction a married couple filing jointly may take on their income tax from $17,500 to $20,000, "which provides an additional significant tax reduction for small families and small businesses when coupled with the rate decrease," Tucker said. The deduction would jump from $8,750 to $10,000 for single filers, and from $14,000 to $15,000 for a head of household.

Cordato was supportive of that item but dismayed that it is capped for income earners above $119,000.

"It should be for everybody regardless of income," he said.

"From an economics perspective the reason why you will have a child tax credit or a child deduction ... is to some degree that kids are an investment," Cordato said. "So money that's invested should not be taxed. It's an investment whether you make $40,000 or $120,000. That principle doesn't change based on how much you make."

As Tucker rolled out details of reforms on the business side, he cast an apparent dig at those who claim North Carolina's economy has been harmed by House Bill 2, the so-called bathroom bill that provoked a handful of entertainers to cancel concerts, and sports organizations to move tournaments to other states.

To encourage new investment by North Carolina businesses the corporate income tax rate would be reduced over two years from 3 percent to 2.75 percent in the first year, and to 2.5 percent in 2019.

"That will make North Carolina's rate the lowest in the U.S. for those states having a corporate income tax. Again, this plan continues to focus on those making less than $50,000 a year," Tucker said.

Small businesses would benefit from a reduction in the franchise tax on S corporations with less than $1 million in net worth, which would be charged a flat fee of $200, a roughly $1,300 tax break, Tucker said.

The reform package would incorporate market-based sourcing, which would provide service-based businesses the same benefits that manufacturing businesses received last year through the adoption of single sales factor apportionment.

Sen. Ralph Hise, R-Mitchell, said after the news conference that the market-based sourcing would actually generate revenue for the state because more tax payments would come in from out-of-state companies than the reductions provided for in-state companies.

Under market-based sourcing, a company would pay North Carolina taxes only on that portion of its profits generated from within the state. Currently those companies pay an income tax on all revenue regardless of the state from which it comes. Under the new plan the companies would have to pay income tax to other states on revenue earned there, depending on their tax laws.

Media companies would be among those to benefit, Hise said. While their customers are mostly in North Carolina, much of their revenue might be generated from outside the state.
Go Back